A dialog from Shakespeare's Pericles, Prince of Tyre, 'Who makes the fairest show means the most deceit' is definitely intriguing. Here, Shakespeare seems to suggest that appearance is far from reality, if not opposite. Literature is rife with examples that portray the age-old debate between appearance and reality. 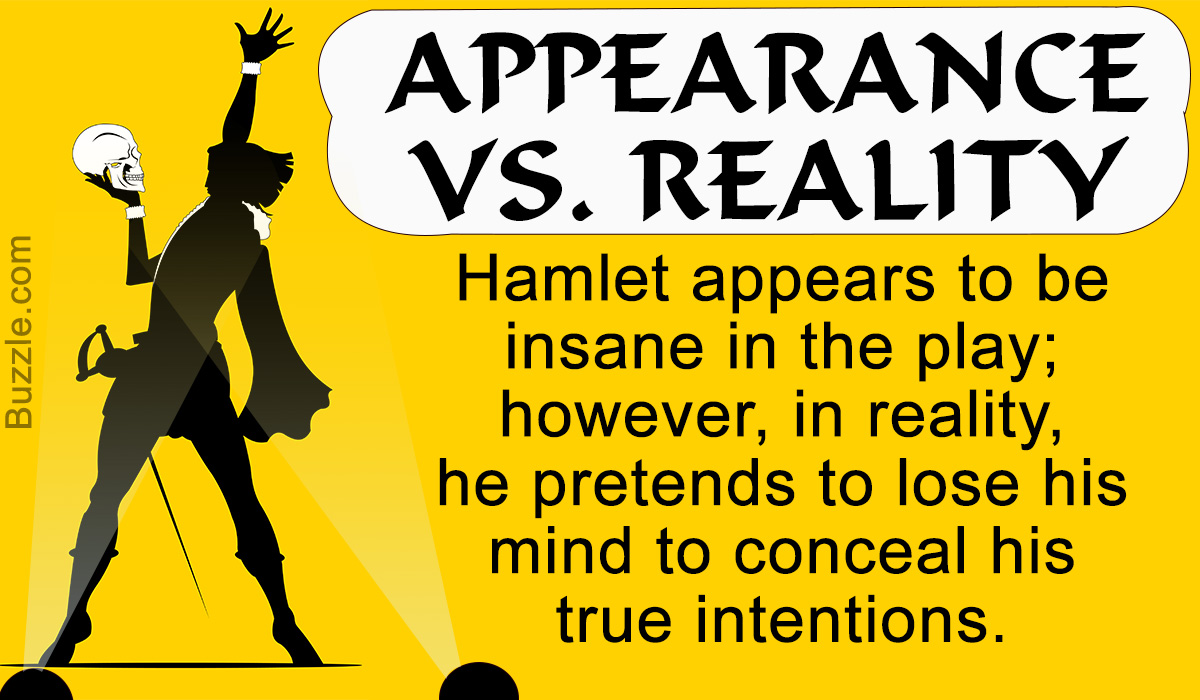 A dialog from Shakespeare’s Pericles, Prince of Tyre, ‘Who makes the fairest show means the most deceit’ is definitely intriguing. Here, Shakespeare seems to suggest that appearance is far from reality, if not opposite. Literature is rife with examples that portray the age-old debate between appearance and reality.

Shakespeare’s famous quote, “All that glisters is not gold,” from the play The Merchant of Venice, tries to convey that what we see may not be reality, and appearances can be deceptive.

The father of the female protagonist, Portia, sets a test for all her potential suitors to win her hand in marriage. The suitor has to open one of three―gold, silver, and lead―caskets. The suitor who opens the right casket, which contains a picture of Portia, would win her hand. One of the suitors, the Prince of Morocco, believes gold to be the right casket. However, all he finds is the picture of Death with a note, which says, “All that glisters is not gold.” The appearance of pure gold tempted the prince to open that casket, only to find out that reality is totally different.

► Appearance
The Merriam-Webster dictionary defines appearance as the way that someone or something looks and a way of looking that is not true or real. The dictionary also specifies appearance as an external show, outward aspect/indication, and something that appears.

From the definition, one can infer that what appears may not be real. If appearance is just a show, then what is reality?

► Reality
The Merriam-Webster defines reality as the true situation that exists, and something that actually exists or happens.

Everyday, we come across many instances that justify popular aphorism or sayings like, “looks can be deceiving,” and “don’t judge a book by its cover”. Sometimes, a person who appears very snobbish may be very generous in real-life. A decent-looking or polite person can turn out to be rude. Similarly, a rough, scary individual can in reality, be a loving kindhearted kindergarten teacher. This appearance vs. reality theme is prevalent in literature as well. Here are a few famous examples that will help understand the concept better.

The constant conflict between appearance and reality seems to one of Shakespeare’s favorite themes, as it has been effectively and cleverly used in a majority of his plays. His play Hamlet can be one of the best examples.

The main character of the play, the protagonist, Hamlet, appears to grow mad in the play. However, as the play progresses, we discover that he has faked insanity to hide his true intentions of killing Claudius to avenge his father’s death. Everyone, including his love, Ophelia, are deceived by his appearance.

To make the theme more prominent, other characters mask their true intentions as well. Hamlet’s uncle, the new king, Claudius appears to be a caring, just, and gentle king who shows exceptional concern towards his stepson. However, as the story unfolds, we can see his true self. Claudius has killed his brother and married the widowed queen to possess the throne. Once realizing Hamlet’s true intentions, he sends him away to England for safety. However, in reality, Claudius plans to kill Hamlet in England.

Like Claudius, his councilor Polonius appears to be a loyal councilor and caring father. However, in reality, he eavesdrops on Hamlet to know the truth and sends a spy on his son as he does not believe him. Other characters like Rosencrantz and Guildenstern appear to be friends with Hamlet; however in reality, they try to deceive him in order to ascertain the truth about his madness. The whole play Hamlet is filled with lies, fraud, and deception. The characters seem to turn darker in reality as the play progress, quite contrary to their appearance. Shakespeare shows us that not everything or everyone is like we perceive them to be.

The difference between appearance and reality personifies itself in the antagonist of the play Othello, Iago. Iago fashions himself to be loyal, supportive, and honest towards Othello. However, in reality, he is jealous of Cassio because he gets promoted above him and hates Othello because he makes Cassio his lieutenant. He calmly devises a plan to take revenge and prepares an elaborate act to turn Othello against Cassio and Desdemona―Othello’s wife. He uses other characters as pawns in his game to achieve his goal.

What appears to Othello is completely opposite of reality as well. Othello sees what Iago wants him to see. Othello believes that his wife is having an affair with his lieutenant. He is so caught up by the staged appearance that he does not bother to seek the truth behind it. This results in death of both Desdemona and Othello. Shakespeare shows us how a person’s influence can impair our ability to know the truth about ourselves.

The master of chilling plays, Shakespeare, weaves another plot that highlights the difference between appearance and reality. Shakespeare sets the tone in the opening scene of the play by making the witches sing, “Fair is foul, and foul is fair.”

Macbeth seems to be a noble man and fearless warrior who serves the king loyally. However, the same man, later in the play, is shown to possesses a great deal of ambition, murderous thoughts, and insecurities.

Like Macbeth, Lady Macbeth too, is not what she appears when the play opens. She seem fearless, ambitious, without guilt, and callous. However, guilt takes over her towards the end, and she is seen weakened by it. Lady Macbeth kills herself in the end, when the guilt becomes overbearing.

Even the prediction made by the three witches can only be understood once the outer layers are peeled. Macbeth becomes carefree after hearing the prediction that he will be killed by a man not born of a woman and when Birnam Wood walks down the hill. These two predictions seem impossible; however, they do occur in the play. Macbeth never imagines the soldiers cutting down the trees and using them as a camouflage as they approach the castle and never knew that Macduff had a cesarean birth.

Nathaniel Hawthorne wrote, “No man, for any considerable period, can wear one face to himself, and another to the multitude, without finally getting bewildered as to which may be the true.” This is precisely what happens to a pious character―Arthur Dimmesdale―in The Scarlet Letter. An overtly a religious minister, Dimmesdale has an illicit affair with a married woman. Though he doesn’t confess the affair at first, managing the dual life takes a toll on his health.

Another example highlighting the contrast between appearance and reality is Roger Chillingworth―the protagonist Heather’s long-lost husband. He fashion himself as a goodhearted, experienced, and kind physician to hide his malicious intent to take revenge of his wife’s cheating.

Finally, all the villagers in the novel also seem to display the paradox. The community claims to be pure at heart; however, acts quite the opposite. Women of the village give little work to Heather, but continue to insult her when the work is completed.

To Kill a Mockingbird

In Harper Lee’s To Kill the Mockingbird, the appearance vs. reality theme is dominant, and two of the best examples could be the characters Boo Radley and Tom Robinson.

Boo Radley is the mysterious character, and often a subject of gossip for the town’s people. He is perceived as a horrible person who was tried as a teenager. However, as the novel ends, we get to see the real Boo Radley who saves Scout and Jem Finch from a fatal attack by Ewell. It is later revealed that he craves for their friendship and he would leave gifts for them.

The rape accused Tom Robinson appears guilty to all the townspeople due to his African ethnicity and the fact that he is a man. However, as Atticus Finch, Tom’s lawyer, explains, the reality is something entirely different. It was the girl who made the advances, and once caught by her father, she blames Tom. However, blinded by appearance, the townspeople never believe the truth.

Is reality truly horrific? Or the appearance more beautiful? Or, is it vice versa? As the great Victorian-era novelist, Samuel Butler says, “Let us be grateful to the mirror for revealing to us our appearance only.” It is always better to look beyond the obvious. Continuing in the same vein, keep in mind to read the whole book before you pass a judgment on it!