A Summary and Analysis of ‘Chains’ By Laurie Halse Anderson

The younger generation may not be able to understand the pain of losing one's identity, especially, if you are a slave. However, Chains by Laurie Halse Anderson, is one such heart-wrenching and intriguing story of a girl named Isabel caught in the snares of slavery. Penlighten presents the summary and analysis of this story to open the eyes of your heart to this painful bondage. 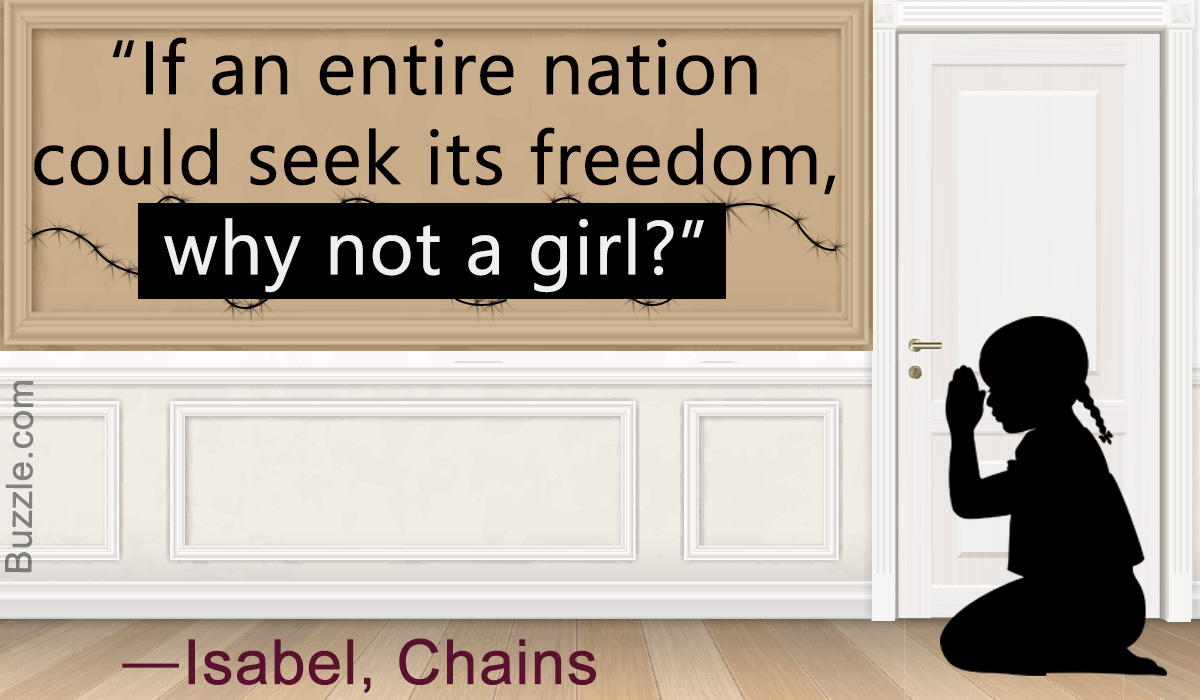 The younger generation may not be able to understand the pain of losing one’s identity, especially, if you are a slave. However, Chains by Laurie Halse Anderson, is one such heart-wrenching and intriguing story of a girl named Isabel caught in the snares of slavery. Penlighten presents the summary and analysis of this story to open the eyes of your heart to this painful bondage.

Laurie Halse Anderson is an American writer who is famous for her young-adult, children, and historical novels. The Margaret Edwards Award winner has written extensively on subjects like dysfunctional families, body issues, etc., in her novels keeping the readers’ age factor in mind.

The novel Chains, which is the first in the Seeds of America trilogy, was awarded the “Scott O’Dell Award for Historical Fiction.”

“I was lost. I knew that we were in the cellar of a house on Wall Street, owned by the Locktons, in the city of New York, but it was like looking at a knot, knowing it was a knot, but not knowing how to untie it. I had no map for this life.”

Isabel, the protagonist of the novel, Chains, is a teenage girl who is bought by the cruel Lockton family. However, deep in her heart, Isabel, craved for freedom. She believes her slavery is like a knot that she knows not how to untie.

Let us find out more about Isabel…

Introduction: Chains begins with the funeral of Miss Finch, Isabel and Ruth’s previous owner. Though it is a sad event, Isabel is eagerly waiting for Miss Finch’s lawyer to come and read out her will which declares their freedom. However, things don’t go as planned. Unfortunately, the lawyer does not make it and not believing that Miss Finch had promised freedom to the girls in her will, Miss Finch’s brother sells Isabel and Ruth to Anne and Elihu Lockton. The girls are terribly disappointed, especially Isabel.

About the Locktons: They happen to be two rich British merchants who reside in New York. They are completely loyal to Great Britain, the country they belong to, even in the independence struggle. The girls are tortured and abused verbally and physically, not to say, made to slog day in and day out. An absolute example of cruel slave masters.

Isabel meets Curzon during this time. He works for Mr. Bellingham, the chief law of enforcement officer of the Patriots. Isabel narrates her story to Curzon who asks her to spy on the Locktons and their friends. He promises her freedom in exchange for the information she passes on to them. She refuses to do so, initially, fearing for her sister’s and her life.

Body: The girls are subjected to continual torture, till one day, Isabel can take it no more. She decides to pass on any useful information regarding the Locktons to the Patriots. One such day, during her stay at the Lockton household, she overhears them and their Loyalist friends discussing a certain amount of bribe money stashed away in a hidden room. The controversial information prompts Isabel to take a bold step towards what she had refused to do earlier―spying. She conveys the information to Curzon, the same night.

The next day, the Lockton house is searched without any luck. Lockton, aware that this would happen, stashes the money elsewhere. However, Mr. Lockton is arrested in suspicion of treason, but is set free the very next day.

Days later, Isabel overhears the Locktons and their Loyalists conspiring to kill General George Washington. This time, Isabel delivers the news to Bellingham’s comrade Colonel Regan who promises to free her and Ruth. However, Lockton, knowing he will be caught, flees to England. Thus, Isabel loses her hope of ever being free.

Climax: As days go by, Mrs. Lockton starts behaving more cruelly towards Isabel and Ruth. She believes that Ruth, who suffers from seizures regularly, is actually possessed by a demon. She sends Ruth away without Isabel’s knowledge. Isabel confronts Mrs Lockton only to get rebuked. As a punishment, Isabel is branded “I,” which stands for Insolence, on her cheek. She feel totally helpless, and cannot see a way out of the situation.

On his visit, Curzon informs Isabel that he has replaced Mr. Bellingham in the Patriot army. Due to lack of help from the Patriots, Isabel decides to go to the British for help. She has heard rumors that the British were intending to free all the slaves after the war ended. However, her hopes are crushed when they do not help her.

In the meantime, Isabel is sent to Mr. Lockton’s aunt, Lady Seymour’s residence, to help her in serving the guests. She stays back at Lady Seymour’s estate that night. The smell of smoke and fire wake her up, and she rushes to check on Lady Seymour. While escaping from the fire-engulfed house, Lady Seymour loses her consciousness, and Isabel unable to hold her mistress, drags her to a safe place. Isabel manages to save Lady Seymour and the picture of her husband, but loses Ruth’s doll in the commotion. This daring act of Isabel earns her favor in the sight of Lady Seymour. Both return to the Locktons.

Meanwhile, the British troops capture Fort Washington. This results in the imprisonment of all the Patriot soldiers. Isabel learns about Curzon’s imprisonment as well. She pitches in to help the imprisoned soldiers by giving them leftover food and drink. She cannot bear to see how Curzon is treated and decides to help him in escaping from prison. She begins spying on the Loyalists again and passes on information to the captain of the Patriots.

Mrs. Lockton learns about Isabel’s double life and verbally abuses her. However, she lets it slip that she hasn’t sold Ruth, and that Ruth is kept at the Lockton estate in Charleston. This upsets Isabel very much. Enraged, Mrs. Lockton locks her up in a potato container, fearing Isabel would run away.

Conclusion: Information of Ruth’s location encourages Isabel to break the chains and run away from the Lockton house. However, before running away, she steals a pass that denotes freedom to its possessor. She helps Curzon out of the jail and rows both of them on a stolen boat across the river to the banks of New Jersey. Free at last, the story ends in both of them walking towards an unknown future.

The story is continued in the next book of the Seeds of America series.

Family:
Family ties is one of the major themes of the novel “Chains.” Though Isabel is separated from her father, and later from her sister, the readers can see the strong bond between them. They are far away from her, but still closer to her heart. The memories of her family are an encouragement to Isabel.

Friendship:
While working at the Lockton household, Isabel makes new friends, namely: Curzon and Lady Seymour. Their loyalty, kindness, and sacrifice help her in moving forward to a free life.

Identity:
In the novel, the protagonist, Isabel, faces some serious challenges which question her identity. However, in her entire journey in the novel, she is determined to live a life of liberty than being chained to slavery.

Slavery:
Slavery described in the novel is a constant reminder of the ominous darkness in American history.

Isabel:
Isabel is the protagonist of the novel who is a slave. The story revolves around her and her struggle to gain freedom.

She is a responsible elder sister and takes care of sister who suffers from epilepsy. She is a loyal friend too, who stands by her friends when help is most needed. She is kind to other people like Lady Seymour. She repays her kindness by rescuing her from the fire and taking care of her afterwards. However, she is not loyal to either the Patriots or the Loyalists. She becomes a double agent providing information to both the sides. It shows she is willing to take risks and is desperate to gain freedom for her and her sister.

Isabel’s life is full of trials and tribulations. She is separated from her family, sold as a slave, and endures mental and physical abuses from her owner. But she, never at any point, loses hope, and is successful in getting what she holds dear to her heart―freedom.

The other supporting characters to the protagonists are―Curzon, Ruth, The Locktons, Lady Seymour, and others.

Most of the actions take place in New York at the time of American Revolution.

Isabel, the central character of the novel, is the narrator of the story.

It is a historical fiction with the American Revolution as a backdrop.

The novel Chains takes the readers back in time. Though the story is continued in the next novel, it showcases a teenage girl’s courage in striving to gain freedom and live a life of fullness and joy.