Subversive literature has been a worthy tool in a rebel's arsenal throughout the history of mankind. Penlighten helps you understand this concept, and provides some inspirational examples. 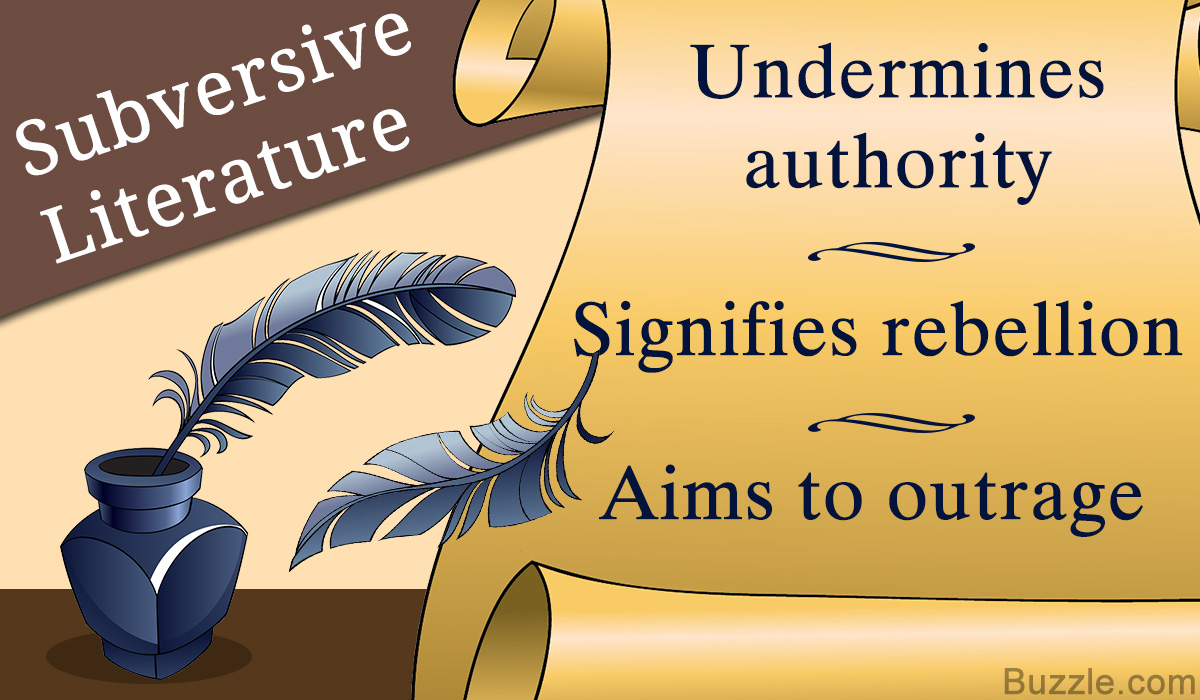 Subversive literature has been a worthy tool in a rebel’s arsenal throughout the history of mankind. Penlighten helps you understand this concept, and provides some inspirational examples.

“The greatest crimes in the world are not committed by people breaking the rules but by people following the rules. It’s people who follow orders that drop bombs and massacre villages.“
― Banksy, Wall and Piece

Subversive literature is all about giving the proverbial middle finger to the system that governs the land. Mind you, this is not all about rebellion for rebellion’s sake, but about creating an upheaval against any prevalent injustice.

Merriam-Webster defines subversive literature as ‘a systematic attempt to overthrow or undermine a government or political system by persons working secretly from within‘. However, note that this branch of literature is expansive enough to include all forms of authority, be it societal norms, legislation, or even parental controls.

Subversive literature has been used to great effect by writers and poets who were looking to create awareness against social injustice, blind archaic beliefs, or even questionable morals.

The standout feature of subversive literature is the manner is which it challenges authority. Remember, this branch is not about inane rants emanating from a frustrated mind. It is all about not accepting things at face value, but to explore, investigate, and validate the truth in order to put it out there.

Going upstream isn’t the easiest thing to do, but then, this form thrives on sensationalism. Its purpose is to shock readers into facing the reality of what ails them, and that there are ways to repair or resolve the issue at hand.

Subversive writing is controversial, since its job is to pick on authority or authoritative figures, but at its heart remains a unified goal―the one which urges people to think and review their surroundings, and to stand up for what is right.

Exponents of the craft rely on sarcastic wit and a slanderous tone to establish its views. This is deliberate, since the form, at its core, seeks to gain awareness through sensationalism. The condescending tone also helps portray authority in a different and lighter vein, alluding to the fact that their opinions and orders do not matter, or are irrelevant.

Although it may seem that subversive literature, is at times comical, or even nonsensical, at its heart lies a very emotional appeal. Subversive writers and poets are those who are deeply affected by the general state of affairs which plague society, and only seek to create a sense of awareness among people. Through their writing, they hope to convey the message that rules need not be accepted as they are, and that they need to be scrutinized before being accepted.

The aim of subversive writing is to urge people to think for themselves, and to question whatever they think is dubious. This leads to the creation of a society which cannot be taken for granted, and where the commons get to have a voice in the real sense.

Jonathan Swift’s A Modest Proposal, published anonymously in 1729, was a scathing attack on the social conditions prevalent in Ireland at the time. It was particularly aimed at the enthusiasm of the authorities who devised several dubious ‘reforms’ which sought to alleviate social and economic ills. The essay was written at the peak of the Industrial Age in Europe, when people were treated as commodities, and no child was considered too young to work in a factory.

I am assured by our merchants, that a boy or a girl before twelve years old is no salable commodity; and even when they come to this age they will not yield above three pounds, or three pounds and half-a-crown at most on the exchange; which cannot turn to account either to the parents or kingdom, the charge of nutriment and rags having been at least four times that value.

The piece begins by highlighting the pathetic conditions of the poor in Ireland―a reality of the times:

It is a melancholy object to those who walk through this great town or travel in the country, when they see the streets, the roads, and cabin doors, crowded with beggars of the female sex, followed by three, four, or six children, all in rags and importuning every passenger for an alms.

It goes on to propose an outrageous solution, which only puts the reader in a state of immense shock, equating children with farm animals which can be raised for slaughter, solving the pressing food crisis.

A young healthy child well nursed, is, at a year old, a most delicious nourishing and wholesome food, whether stewed, roasted, baked, or boiled; and I make no doubt that it will equally serve in a fricassee, or a ragout…

Swift’s shockingly effective irony places this essay on top of the pile when it comes to subversive literature.

Listed here are a few outstanding examples of subversive literature:

Subversive literature is a form of writing that is rather unique. A sincerely subversive piece can only be written by someone who is extremely distraught, and earnestly wishes to bring about a change, and push the people into taking charge.