Descriptive writing is about using the power of words to arouse the imagination, capture the attention, and create a lasting impact in the mind of the reader. In this article, you'll learn how to employ descriptive elements in your writing, tips to enhance your descriptive writing skills, and some exercises to better yourself at it. 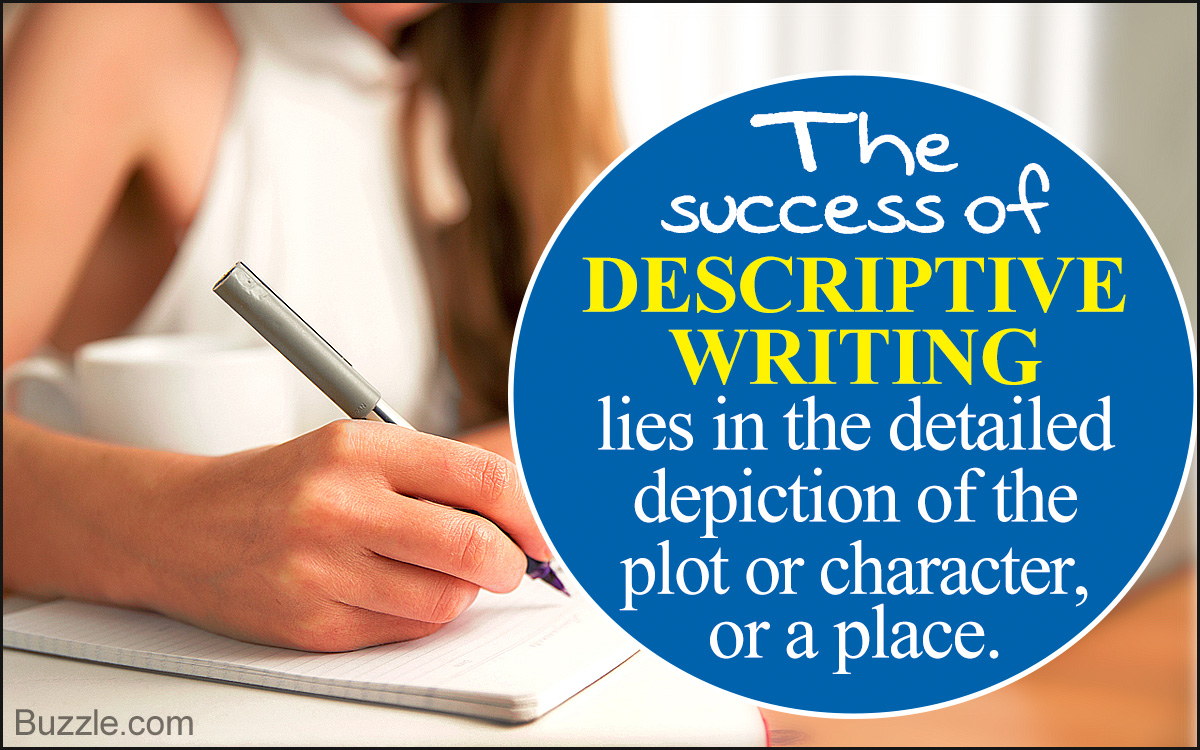 Descriptive writing is about using the power of words to arouse the imagination, capture the attention, and create a lasting impact in the mind of the reader. In this article, you’ll learn how to employ descriptive elements in your writing, tips to enhance your descriptive writing skills, and some exercises to better yourself at it.

Read the two sentences given below:

Which one of the two do you find more interesting to read? Most definitely the second one. This is because, while the first sentence merely tells you directly that ‘you felt tired at work today’, the second one explains the same experience in a much more vivid and relatable manner.

From this you can see that even something as simple as the above sentence can be transformed using literary devices that aid visualization, into something that someone can relate to. This is what descriptive writing is all about: heightening the sense of perception and alluring your reader to read ahead, because you have so much more to say.

Given below are a couple of good pieces of descriptive writing from authors who know their business.

‘But the door slid slowly open before Lupin could reach it. Standing in the doorway, illuminated by the shivering flames in Lupin’s hand, was a cloaked figure that towered to the ceiling. Its face was completely hidden beneath its hood. Harry’s eyes darted downwards, and what he saw made his stomach contract. There was a hand protruding from the cloak and it was glistening, greyish, slimy-looking and scabbed, like something dead that had decayed in water…’
– Harry Potter and the Prisoner of Azkaban by J.K. Rowling

‘I don’t know what I’d expected but it was something different than I saw. She looked unexpectedly young. Or, I suppose said better, she looked unexpectedly “not old”. Her hair, which was completely white, had a yellowish cast that could almost have been mistaken for a pale blond, and it was loose around her shoulders. And long. Longer than mine. No doubt she normally wore it pulled up in a bun, and such a style would have given her a more predictable little-old-lady look, but the way it was here now, parted on the side – long, loose, and straight – she seemed ageless as an ancient sculpture. This sense was enhanced by her skin. Though it had the fragile crepeyness of age, she had few wrinkles, especially across her forehead, which was smooth to a point of being almost waxy looking. She was of obvious northern Germanic heritage, with pale eyes and prominent features. Although she was not overweight, her bones were big and blunt, giving the impression of a tall, sturdy woman.’
– Twilight Children by Torey Hayden

Why be Descriptive While Writing?

Tips you Can Use

Identify what you’re about to describe

While it can be a wonderful creative exercise to simply describe anything you observe, in descriptive writing, there is often a specific reason to describe whatever you have set out to describe. Tapping this reason can help you keep the description focused and infuse your language with the particular emotion or perspective that you want to convey to your readers.

Sometimes, you may get so caught up in making your work colorful and creative that you may end up having a mash-up of descriptions that follow no particular order. This will render the effort of writing useless as the various descriptions will simply confuse the reader. For instance, if you want to describe characters in a particular situation, begin by describing the setting, then proceed to the most important character of that particular situation, and then to the least important one (if necessary).

Imagery is the best tool you can employ in descriptive writing. Since you cannot show your reader what you are imagining, you need to paint a picture with words. You need to make the depiction of your imagination so potent that your reader will instantly be able to visualize what you are describing. However, don’t go overboard. Make sure that the focus does not dwindle stray. Keep your descriptions specific to the subject in question. The writing must be able to draw in the reader; hence, the writer should say things that the reader can relate to or empathize with. An introductory backdrop can often provide an effective setting for the remaining part of the piece. Great descriptive writing has the ability to lure the reader, enticing him or her to continue reading right to the end. While giving the details is important, it is how they are presented that makes the difference.

One of the most effective ways to make the experience you are describing vivid for your reader is to use the five senses: smell, sight, sound, taste, and touch. When the descriptions are focused on the senses, you provide specific and vivid details in such a way that it shows your reader what you are describing. So, when you describe a subject, depict it in such a manner that it involves the reader’s possible sensory interpretations. It must make the reader imagine what he would see, hear, smell, taste, or feel when he reads what you have written.

She gently squeezed the juice out of the plump, red tomato. She blended this juice into the simmering mix of golden-brown onions and garlic in the pan, and watched as they melded into each other. She then added the spice mixture that she had prepared, and the air was permeated with a mouth-watering aroma.

It is true that the purpose of adjectives is to describe a subject, but overuse of adjectives in descriptive writing can render the piece shallow and hollow. Hence, make it a point to use other parts of speech to express the same sentiment. You’ll be surprised how effectively nouns, verbs and adverbs can be used to describe something, sometimes even better than adjectives alone. For instance, look at the two sentences below.

The first sentence has used an adjective (fresh) to describe the flowers. It is a good description too, because the comparison to morning dew is something that will immediately put the reader in the sense of mind that you want. The second sentence too has compared the freshness to morning dew, but has used a noun (freshness) and a verb (equal) to do so, and in the process has probably enticed the reader to continue reading, more than the first sentence.

Before you actually begin writing, it is always a good idea to build a word bank of related words and ideas. For instance, if you are going to be describing a flower arrangement, you could jot down a few ideas before you start describing it, like: vase, color, types of flowers, leaves, stem, style, shape, fresh, etc. Once you have these basic words, you could start descriptive sentences for each one. Then, carry on from there.

Impact is what you’re looking to create in the minds of your readers. You want your readers to relate and empathize with what you’re writing. This will be close to impossible if your work does not reflect the passion that you feel for it. Make them feel what you feel with the words you write. Language that relates to powerful emotions such as love, hatred, admiration, disgust, etc., can convey the range and intensity of the sentiment that you are trying to express. Use them to your favor and get the desired effect.

Given below are some simple, yet effective exercises that you can use to better yourself at descriptive writing.

Decide on an everyday action, say ‘making a pot of coffee’ and write about it in a descriptive manner. Give yourself 3 words that you’re not allowed to use while writing about it. You’ll see yourself reaching for the thesaurus, which will help improve your vocabulary.

Pick random objects like a hat, a burger, a chair, etc., and place them before you. Enlist the different names that these objects can be called. Describe each of the objects in sentences that have more than 15 words each. Be as imaginative as you can.

Get your ‘assignments’ read by an objective person to see if they can relate to and understand properly what you have tried to convey.

Make descriptive writing a rewarding experience, both for your reader and yourself. If you like what you write, chances are that your reader will too. As is evident, having a comprehensive vocabulary is the key to good descriptive writing. But mere vocabulary will fall short if your piece lacks passion, logic and interest. The trouble is that it can easily become an incoherent rambling of senses and emotions. To avoid that, present what you are writing about in a logical and organized sequence of thoughts, so that the reader comes away from it with a cogent sense of what you have attempted to describe.