Difference Between Independent and Dependent Clause With Examples

Home / Uncategorized / Difference Between Independent and Dependent Clause With Examples 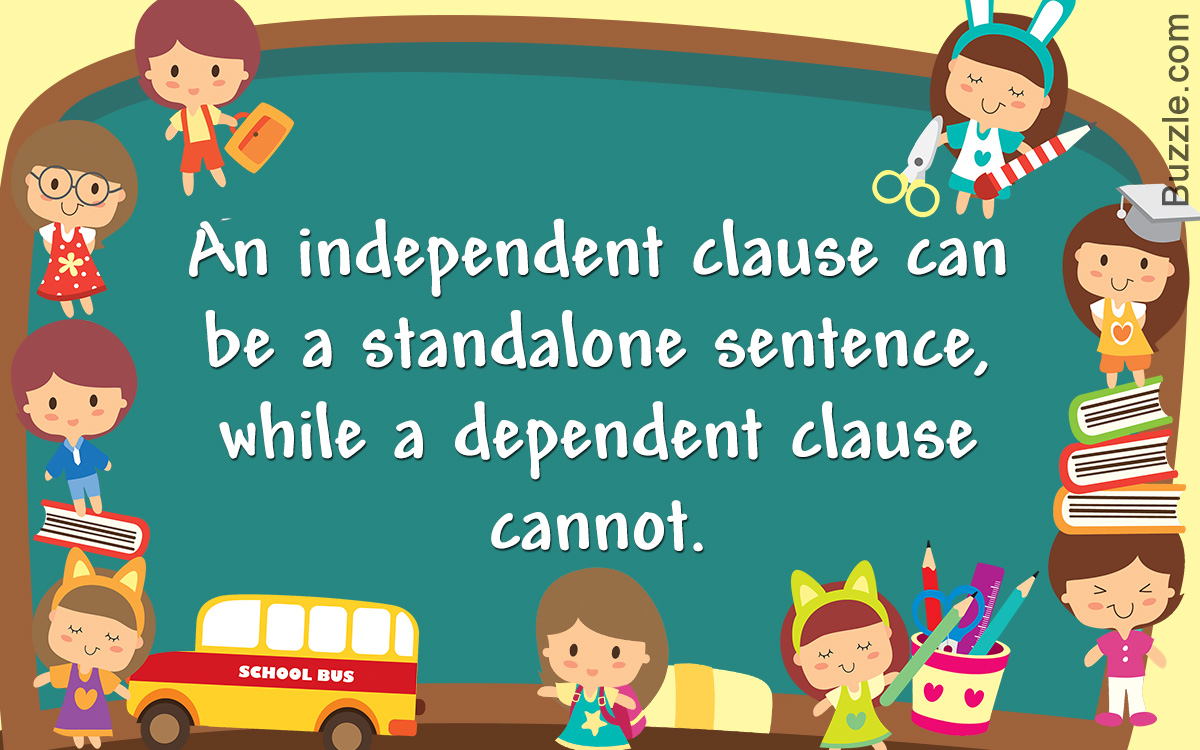 A clause is a collection of words and is a part of a complete sentence. You may be aware that there are three types of sentences―simple, compound, and complex. Compound and complex sentences are the ones that contain clauses. These clauses are generally joined together with a conjunction.

Clauses are classified based on different criteria. However, a common methodology by means of which they are distinguished is independent clause and dependent clause. They are also termed as main and subordinate clause, respectively.

♣ I went to the party and I had soft drinks.

Both sentences, ‘I went to the party’ and ‘I had soft drinks’ are independent clauses. They can be stated as individual sentences, yet the ‘and’ creates a more intimate relationship between the two.

♣ I was very tired after work. But I still washed the dishes.

♣ She missed her bus, consequently, she was late for class.

In this case, the coordinating word is a conjunctive adverb.

♣ The teacher was leaving the class when I arrived.

‘When I arrived’ makes no sense in this case. It is only after reading ‘The teacher was leaving the class’, does the sentence make complete sense.

Observe the two sentences carefully. The sentence ‘I am glad to be alive’ is the highlight here. Yet, the usage of the two different conjunctions and two different dependent clauses can change the meaning of the sentence completely. Thus, the subordinate clause is heavily dependent on the main clause, it just cannot survive on its own.

♣ Emily decided to meet her friend after her class was over.

♣ What she does with the money is none of our business.

This is a noun clause, since it does what is normally the function of a noun. In this case, it is used as a subject.

♣ My sister, who is an expert, helped me out with this.

This is a dependent adjective clause, since the coordinating word is describing the noun in the main clause.

♣ Students, who have a low score, must enroll for remedial tests.

Here, ‘Students must enroll for remedial tests’ will be the main/independent clause, and ‘who have a low score’ will be the subordinate adjective clause.

♣ If I do not arrive before 7, you can leave for the party.

Here, ‘If I do not arrive before 7’, is a subordinate adverb clause.

An important thing you need to remember is not to join two independent clauses with a comma. This is an error and is called comma splice.

Clauses form a very integral part of grammar. Independent and dependent clauses are rather easy to learn and identify, and are used often for appropriate and meaningful sentence formation. While studying this topic at an advanced level, do not forget the basics. A clause is different from a phrase, the latter has no finite verb. Also, remember that a proper sentence needs to have the subject and the object, this goes for all three types of sentences. The marvel of language and grammar will never cease to amaze us, right?