A Summary and Analysis of Emily Dickinson’s ‘I Felt a Funeral, in My Brain’

Funeral and death being the central themes, it is considered as one of the darkest poems of Emily Dickinson. Penlighten helps you to understand it better with 'I Felt a Funeral, in My Brain' analysis.

Home / Uncategorized / A Summary and Analysis of Emily Dickinson’s ‘I Felt a Funeral, in My Brain’ 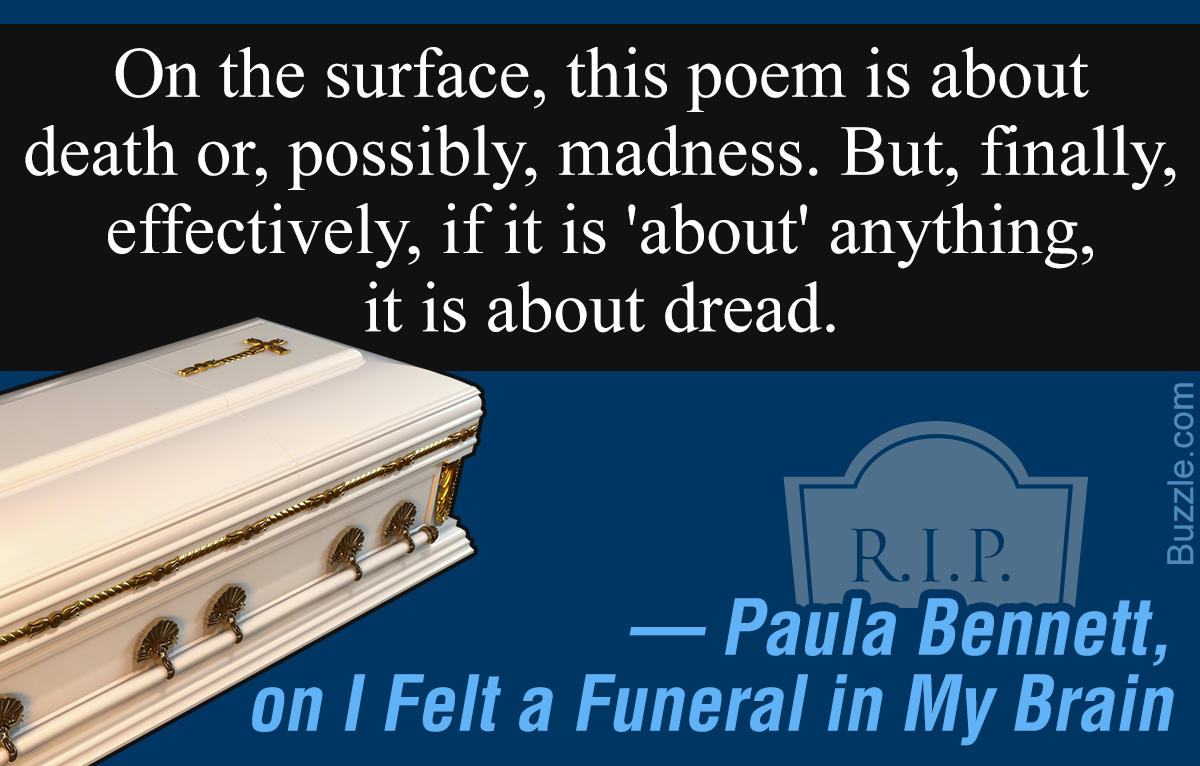 Funeral and death being the central themes, it is considered as one of the darkest poems of Emily Dickinson. Penlighten helps you to understand it better with ‘I Felt a Funeral, in My Brain’ analysis.

Emily Dickinson (1830-1886) was an American poet known for her poems as well as her reclusive lifestyle. Born in a prosperous family, Dickinson chose to spend her latter life in solitude within the four walls of her house. She rarely entertained guests. However, she maintained her friendships by writing letters to her closest and dearest friends.

Only few poems were published during her lifetime. After her death, Dickinson’s younger sister discovered a stash of her poems. Keeping the readers of that era in mind, they were modified accordingly and published. However, in 1955, a complete and unaltered collection of her poems was published.

Most of her poems deal with seemingly contradictory themes―death and immortality. The poem, ‘I Felt a Funeral, in My Brain’, describes the narrator’s experience of a funeral.

I felt a Funeral, in my Brain,
And Mourners to and fro
Kept treading – treading – till it seemed
That Sense was breaking through –

And when they all were seated,
A Service, like a Drum –
Kept beating – beating – till I thought
My mind was going numb –

And then I heard them lift a Box
And creak across my Soul
With those same Boots of Lead, again,
Then Space – began to toll,

As all the Heavens were a Bell,
And Being, but an Ear,
And I, and Silence, some strange Race,
Wrecked, solitary, here –

And then a Plank in Reason, broke,
And I dropped down, and down –
And hit a World, at every plunge,
And Finished knowing – then –

I felt a Funeral, in my Brain,
And Mourners to and fro

The speaker narrates a funeral procession in progress. The narration is based on the whole scene that takes place in her “brain.” A swarm of mourners move about aimlessly around the casket. One of the interpretations of the poem suggest that the narrator is no more but she could still feel the activities going around her.

It seems the constant bustling of the mourners going back and forth is finally breaking through the narrator’s senses. The speaker has used the word “tread” repeatedly which can mean that she thinks the mourners are invading into her private space.

And when they all were seated,
A Service, like a Drum –

Finally, all the mourners sit down for the funeral service, and the narrator begins to hear a drum-like sound at the service.

Kept beating – beating – till I thought
My mind was going numb –

The drum-like sound continues and penetrates right through her senses causing her mind to go numb.

Now, she hears the mourners picking up the casket carrying the dead body. Here, the readers can see the narrator shift to a spiritual territory from the physical one as she mentions the word “soul”. She describes her soul as the funeral ground, and compares the creaking of her soul to that of an old wooden floor that creaks under the pressure of someone’s foot.

With those same Boots of Lead, again,
Then Space – began to toll,

She further states that the mourners are wearing lead boots, the sound of which, for some reason best known to her, she recognizes from some previous experience. She does not give any further explanation. While all this is going on in her head, she hears the church bell tolling in the background.

As all the Heavens were a Bell,
And Being, but an Ear,

Here, the word ‘being’ refers to human beings, and the ears imply that they listen to all the sounds in the universe. However, also emphasizing that they do not have control on what they hear because all the sounds, from a church bell to the sound of boots, are all heard by her at the same time.

And I, and Silence, some strange Race,
Wrecked, solitary, here –

Suddenly, the narrator finds herself in an amusing race with silence itself, almost as if she has made friends with it. She feels utterly alone in this space as the peace within her is wrecked. The last word of the stanza “here” indicates the place where the narrator is; however, she has not specified the exact location.

And then a Plank in Reason, broke,
And I dropped down, and down –

That was the last straw. The plank of reason which supported her thus far breaks, and she plunges right through it to an endless downward journey. What she actually implies is―her reasoning powers are now saturated.

And hit a World, at every plunge,
And Finished knowing – then –

All through her downward journey, she bumps into numerous worlds on her way, and finally, the journey comes to an end. She implies, she has come to the end of her reasoning, and can go no further. It is over for her.

The “then” at the end of the poem can be interpreted in many ways. For one, it could have been her, breathing her last, which meant the end of all things in her life, or she may have entered another world of imagination when she must have blacked out after a traumatic experience, or she must have lost her mind completely at some point in her life. The “then” does not give a clear indication of what it means but leaves the poem open-ended.

The theme of the poem, like most of the Dickinson’s poems, is death. On the surface level, the poem deals with physical death; however, on the other hand, it can be described as the death of sanity.

Another theme can be―the interpretations of reality. It is almost as if the speaker has woken up from a dream, and all the scenes may have just been her imagination.

Funeral
This symbol has been used in the poem to describe sanity departing from a person. At every step of the funeral, the readers can feel the narrator’s loss of reality and a gradual downward journey into an imaginary world.

Versions of Reality
The narrator describes the physical, intellectual, and spiritual realms being one with no distinction between them.

Funeral Procession
‘And Mourners to and fro,’ ‘And then I heard them lift a Box,’ etc. makes one imagine a funeral procession in progress, and adds a touch of reality to the poem.

Like hymns, the poem includes quatrain stanzas. Dickinson uses slant rhyme scheme where the words at the end of each line sound similar but do not rhyme. The poem is written in iambic pentameter.

Emily Dickinson’s poem ‘I Felt a Funeral, in My Brain’ is not something that is read once and never revisited. The poem actually sets you thinking deeper about how one may feel after one has passed away, if you haven’t already. We hope that the article has helped you delve deeper into the poem and understand what the poet actually wants to convey.