Understanding Enthymeme and its Implication With Examples

Language is beautiful. It is more beautiful when we are able to comprehend the hidden meanings of write-ups. There are many devices that a communicator uses. This post will highlight the definition, use, and differences of enthymeme and syllogism, two of the most commonly used devices of literature which find their use in everyday life.

Home / Uncategorized / Understanding Enthymeme and its Implication With Examples 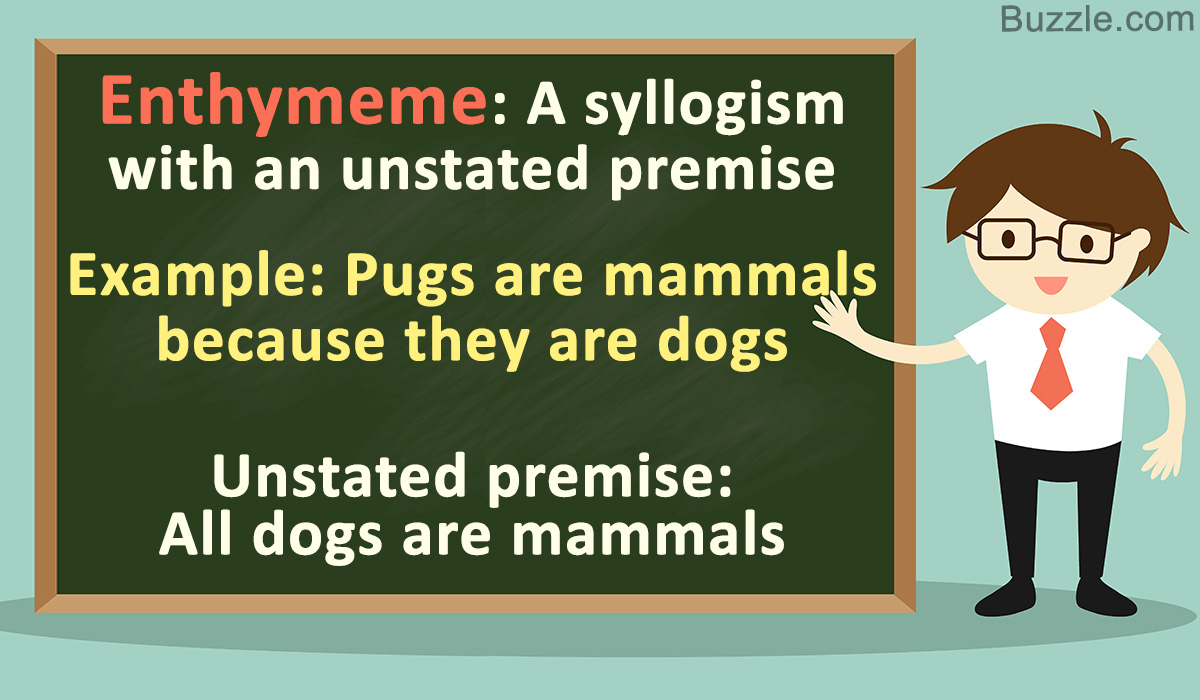 Language is beautiful. It is more beautiful when we are able to comprehend the hidden meanings of write-ups. There are many devices that a communicator uses. This post will highlight the definition, use, and differences of enthymeme and syllogism, two of the most commonly used devices of literature which find their use in everyday life.

The maiden use of Enthymeme was made as early as 1552.

Before making an attempt to understand the nuances of Enthymeme, it is almost mandatory to first have a clear conception about two other concepts which are linked to the former directly. The first being a premise and the latter being syllogism. Let us first begin with premise.

A premise is an assertion that helps to deduce a fact and then give a conclusion or a statement. Therefore, in simplest of the terms it is rightly stated that a premise is a hypothesis, or a supposition which is succeeded by a conclusion.

Example:
► The conclusion of the experiment was wrong, because of the wrong premises given.
► This experiment is based on the premise, ‘what goes up, must come down’.

You can view most of the syllogism type of logical understanding concepts in almost all the competitive examinations papers. For the conclusion to be true, both the premises must be valid.

It can be understood from the above that premise is part of syllogism.

Like a syllogism, enthymeme is an argument. But here, one of the premises is not clearly defined, or pronounced. It is left unstated for the obviousness the argument holds. The left out premise is well understood, even without stating it. It is implied. This is the difference between a syllogism and an enthymeme.

Let’s take a simple example of an enthymeme for the ease of understanding.

Here, for the above argument to be an enthymeme, the conclusion can be omitted to allow the reader to infer what is the conclusion. It is easier for them to well understand that considering both premises, Susan has to be a Christian.

From the above discussion we also understand that enthymeme is persuasive communication. It is an extension of syllogism. A syllogism rests on validity of the premises. Unlike this, an enthymeme, doesn’t always rest on validity. It applies persuasive communication technique, and also applies rhetoric. By rhetoric we understand a statement, which is eloquent and appealing. It has the ability to motivate people to do something. Please take a look at the following example of a rhetoric.

► It is strongly recommended that you donate $100 at once to our organization, for this is to aid the children in our ‘home for the homeless’!

The above is a rhetoric to persuade the commoners for giving alms to the needy and homeless children. Therefore, we understand that an enthymeme can use a rhetoric, therefore, it uses persuasion and emotional appeal. We will now take a look at the many applications of an enthymeme, and how it is used differently for different communication purposes.

So, by now we know that an enthymeme is a rhetoric statement that purposely leaves the deduction partially unstated. It makes the reader to wear the thinking cap and deduce or assume the unstated facts for himself. One of the many fields where this is used vigorously is in advertising. They are filled with signs, hints, probabilities etc. it uses both sarcasm and humor.

Examples of enthymeme in Literature

► “But Brutus says he was ambitious; And Brutus is an honorable man.”
This is a quote from Julius Caeser. From the above quote it is understood that, Brutus was ambitious and honorable. The unstated conclusion can be assumed as all honorable men are ambitious.

Examples of enthymeme in Advertising

Advertising is the just and must way of effective communication with the consumers. The driving force for a consumer to buy a particular object is either his need for the same, or his want for it. Here comes the role of advertising. The role of advertising is to use the feeling of discontent to the optimum. By saying this, it is meant that, we might well know that we are not in need of a particular object, but when we see an appealing advertisement of the same, there is an enduring subconscious urge of having it. And till the time we actually have it we are in a state of restlessness. This is the power of effective advertising.

We have all seen products reading ‘sugar-free!,’ we all know the harmful effects of sugar. So something which is devoid of sugar is always a welcome choice. Advertisers make use of this. They push the products towards the consumer using the phrase, ‘sugar-free’. They never mention the substitutes of sugar that have been used. These are mentioned on the list of ingredients, but are never pronounced. What if the substituting element is all the more detrimental than sugar? But we are all lured by the ads which say, ‘sugar-free!’ The other example can be of ‘gluten-free’ diet. All products from biscuits to cake mix promote their expensive products as ‘gluten-free’. But is that free?

In the above example of Glutino, the advertiser is motivating the consumer to switch to a new product that is delicious and will take one to newer possibilities. We all know that food is necessary for survival, but the relation of food and possibilities is far from truth. Food is a physical attribute, possibilities are abstract. Eating and getting opportunities are way different from each other. But this is enthymeme which is being used to promote products. Hence, effectively used in advertising too. We can locate such kinds of enthymeme examples in all forms of media, including print, television, audio, and the more pervasive, internet media too.

Examples of enthymeme in Arguments

To be able to write a good enthymeme, one has to understand the importance of premises, syllogism, arguments, and assumptions. A clear understanding of these would definitely benefit one to write great enthymemes. I am sure the above article has thrown light on the critical concept of enthymeme since it has been explained with appropriate examples.