44 Cool Examples of a Rhetorical Question to Understand it Better

Have you noticed how many questions cross your mind on a daily basis or how many you ask the people around you? Do you ever stop to wonder if these rhetorical questions really provide a satisfactory answer to what your seeking? Isn't it kind of pesky to be barraged with questions that you are unable to directly answer? Wouldn't it be nice to get a better understanding of rhetorical questions with relevant examples with this Penlighten post?

Have you noticed how many questions cross your mind on a daily basis or how many you ask the people around you? Do you ever stop to wonder if these rhetorical questions really provide a satisfactory answer to what your seeking? Isn’t it kind of pesky to be barraged with questions that you are unable to directly answer? Wouldn’t it be nice to get a better understanding of rhetorical questions with relevant examples with this Penlighten post? 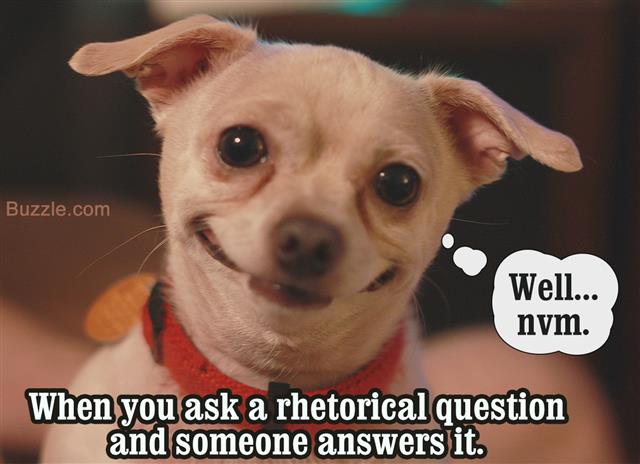 The ancient Athenians believed that success and charm of an individual depended on his rhetorical ability to speak and debate. The word rhetorical is derived from the Latin word rhetoricus and the Greek word rhetorikos which means skilled speaker or orator. The technical term for a rhetorical question is Erotema which in Greek means question. In literary terms, these questions are persuasive or thought-provoking, they can be humorous, self-explanatory, or reflective.

Oxford English Dictionary indicates that the phrase ‘rhetorical question’ first appeared in English more than 300 years ago. The dictionary further indicates that it was published for the first time on a political pamphlet written by the First Earl of Anglesey in 1686: ‘To this Rhetorical Question the Commons pray they may Answer by another Question’. In a 1721 religious text written by Robert Manning, an illustration as well as the rhetorical question with its phrase appears: ‘But, to turn your fine Rhetorical Question upon yourself, cannot you enjoy the Advantages you have over impenitent Sinners, and the Devils without Damning them all to the Pit of Hell forever?’

Rhetorical Question: A figure of speech indicating a question asked only to produce an effect or make a statement, rather than to evoke an answer or information. It is asked when the questioner already knows the answer or an answer is not really required.

★ The Greeks took lessons to mesmerize audiences with their oratory and public speaking skills mostly for political reasons and to influence the voter. The technique they applied to keep the crowd spellbound is known as rhetoric or with rhetorical questions. This technique is still used by politicians, lecturers, priests and other skilled orators to keep their audience in control and get engaged in their ideologies.

★ A rhetorical question may already have an obvious answer, but the questioner asks these questions to lay emphasis on the projected point. In literature, it is used for style and as a strong persuasive device. These questions provoke deep thoughts, sometimes impose sarcastic reasoning, and are often used as a tool during debates to avoid obtaining an immediate declaration.

★ Writers employ this technique for rhetorical effects to arouse the interest of the reader and enjoy the aesthetic beauty the questions generate. Effective speakers know how to stir audience reaction, such questions make the audience a partner of the speaker’s statements. Instead of presenting one-way emotional statements, the orator involves the audience more emotionally by invoking their curiosity and surprising them with a rhetorical question.

★ These questions can be used as an exclamation point on an introducing statement. While the introducing statement may be a factual statement, a rhetorical question forces your audience to think hard about it. Careful use of misdirection in a speech is an effective way of generating audience surprise, and this results in them being active participants. One form of misdirection is when you make a statement which leads in one direction, and then follow it up with a statement that pulls in the opposite direction.

★ Is the Pope Catholic?

★Is this a great product?

★ Do you want to be a big failure for the rest of your life?

★ Is there anyone smarter than me?

★ Is this supposed to be some kind of a joke?

★ How much longer can this injustice continue?

★ Could I possibly love you more?

★ What defense do the homeless have, if the government will not protect them?

★ You were at the scene of the crime, correct?

★ How corrupt is the government?

★ If everyone else jumped off a cliff, would you do it too?

★ You don’t expect me to go along with that crazy scheme, do you?

★ If love is blind, why is lingerie so popular?

★ Marriage is a great Institution, but who wants to live in an institution?

★ Why are there locks on the doors to the convenience store that is open 24 hours a day, 365 days a year?

★ Why does Teflon stick to the frying pan, since nothing ever sticks to Teflon?

★ Why are highways build so close to the ground?

★ Why do overlook and oversee mean opposite things?

★ Do fish feel thirsty in the water?

★ Why do they call someone “late” if they died early?

★ Do man-eater sharks eat women too?

★ Why is it called ‘after dark’, when it is really after light?

★ Why don’t they call mustaches ‘mouthbrows?’

★ Why is the man who invests all your money called a broker?

★ Can you cry underwater?

★ Why isn’t the number 11 pronounced onety one?

★ What hair color do they put on the driver’s licenses of bald men?

★ Why is a person who plays the piano called a pianist, but a person that drives a race car is not called a racist?

★ Mighty Caesar! dost thou lie so low?
Are all thy conquests, glories, triumphs, spoils,
Shrunk to this little measure?
― Shakespeare’s “Julius Caesar”

★ How do you think I feel
when you make me talk to you
and won’t let me stop
till the words turn into a moan?
Do you think I mind
when you put your hand over my mouth
and tell me not to move
so you can “hear” it happening?
― Rhetorical Questions- Hugo Williams

Rhetoric question normally prompts an individual or a crowd to ponder upon their own opinions and notions rather than specifically answer out loud.