Examples of Zeugma in Literature That’ll Spice Up Your Sentences

There are so many things in English grammar that not all of us are aware of. One such interesting thing that adds a flavor to English literature is a zeugma. Let's find out with some examples, what it is and how it spices up your sentences! 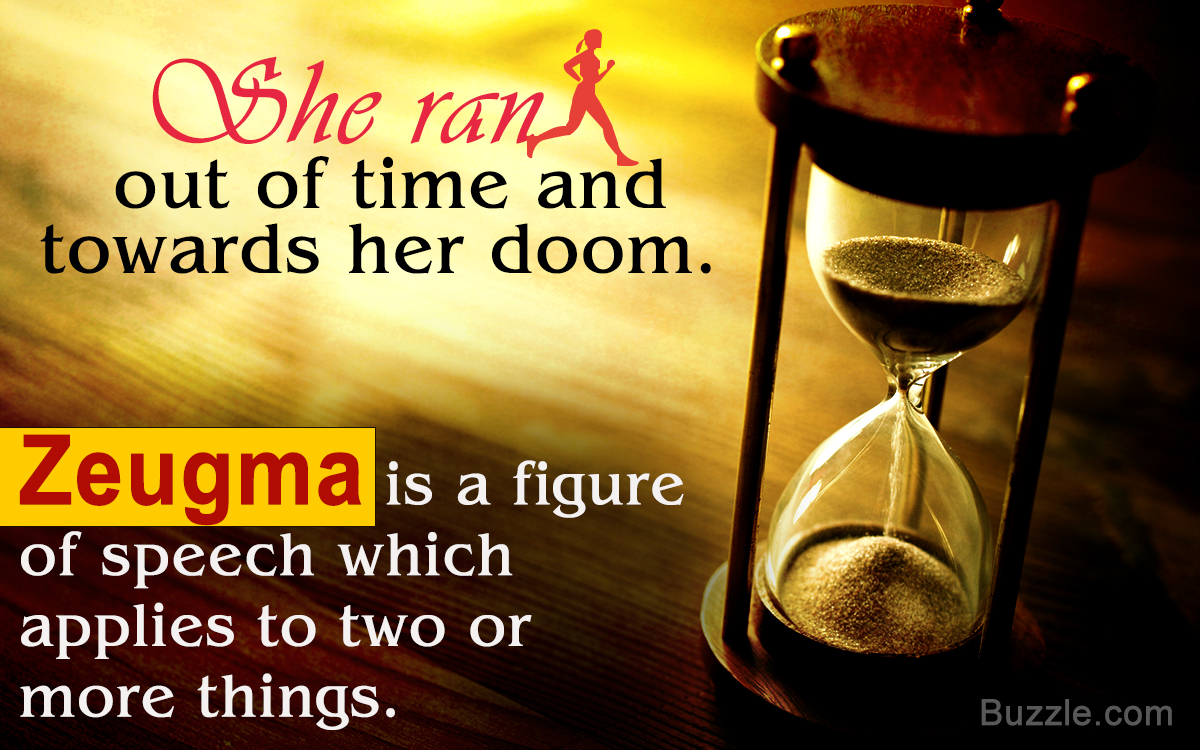 There are so many things in English grammar that not all of us are aware of. One such interesting thing that adds a flavor to English literature is a zeugma. Let’s find out with some examples, what it is and how it spices up your sentences!

Zeugma amongst many other words is derived from the Greek language meaning “bonding”.

Zeugma is a figure of speech, mainly a verb or an adjective, that applies for two or more nouns in a single sentence. To understand this let’s consider this sentence – She ran out of time and towards her doom.

Here, running out of time is a different sentence that makes grammatical and logical sense, and so does running towards her doom. These two grammatically and logically correct sentences are blended together with a verb ‘running’. This makes a zeugma!

Another term called ‘syllepsis’ is considered to be a zeugma, although it functions a bit differently. The Oxford English Dictionary also is confused with the two terms, zeugma and syllepsis. It’s a verb with two nouns, but relevant to only one out of them. For example, Tennyson’s line from Ulysses, “He works his work, I mine”, here, the verb ‘works’ is relevant to ‘his work’, but for the other part of the sentence, ‘I works mine’ is grammatically and logically wrong.

Famous examples of zeugma in literature

“Whether the nymph shall break Diana’s law,
Or some frail China-jar receive a flaw,
Or stain her honour, or her new brocade.” (Alexander Pope, The Rape of the Lock)

“Who sees with equal eye, as God of all,
A hero perish, or a sparrow fall,
Atoms or systems into ruin hurled,
And now a bubble burst, and now a world.” (Alexander Pope, Essay on Man)

“[They] covered themselves with dust and glory.” (Mark Twain, The Adventures of Tom Sawyer)

“Miss Bolo […] went straight home, in a flood of tears and a sedan-chair.” (Charles Dickens, The Pickwick Papers, Chapter 35)

“[H]e was alternately cudgelling his brains and his donkey when, passing the workhouse, his eyes encountered the bill on the gate.” (Charles Dickens, Oliver Twist)

“We were partners, not soulmates, two separate people who happened to be sharing a menu and a life.” (Amy Tan, The Hundred Secret Senses)

“She lowered her standards by raising her glass,
Her courage, her eyes and his hopes.” (Flanders and Swann, Have Some Madeira, M’Dear)

➜ she lost her shawl and confidence… (Elly Wouterse)

She Fell In Love And The Danger

➜ She fell in love and in danger (Dr.Ram Mehta)

➜ He emptied the trash and his heart… (John lawless)

➜ Dawn peeks over the hill and I. (Debbie Guzzi)

➜ Cast down, his boat and his dreams sank
as his heart and his love fled away. (Olive Eloisa Guillermo)

➜ The massive ship and hopes were lost. (Carolyn Devonshire)

“You are free to execute your laws, and your citizens, as you see fit. – Star Trek: The Next Generation

“He was leaning against a table in the hall, heavy with dejection or sleep.” – The Great Gatsby

“Calpurnia was something else again. She was all angles and bones; she was nearsighted; she squinted; her hand was wide as a bed slat and twice as hard” – To Kill A Mockingbird

“Yes, our teeth and ambitions are bared.” Scar, Example in The Lion King