An Explanation of Inverted Syntax With Very Effective Examples

An inverted syntax refers to a change in the pattern of words in the formation of a sentence. It serves as an effective literary device to create rhyming patterns, a specific tempo, a certain mood, or a dramatic effect. This Penlighten post tells you about inverted syntax with the help of some examples. 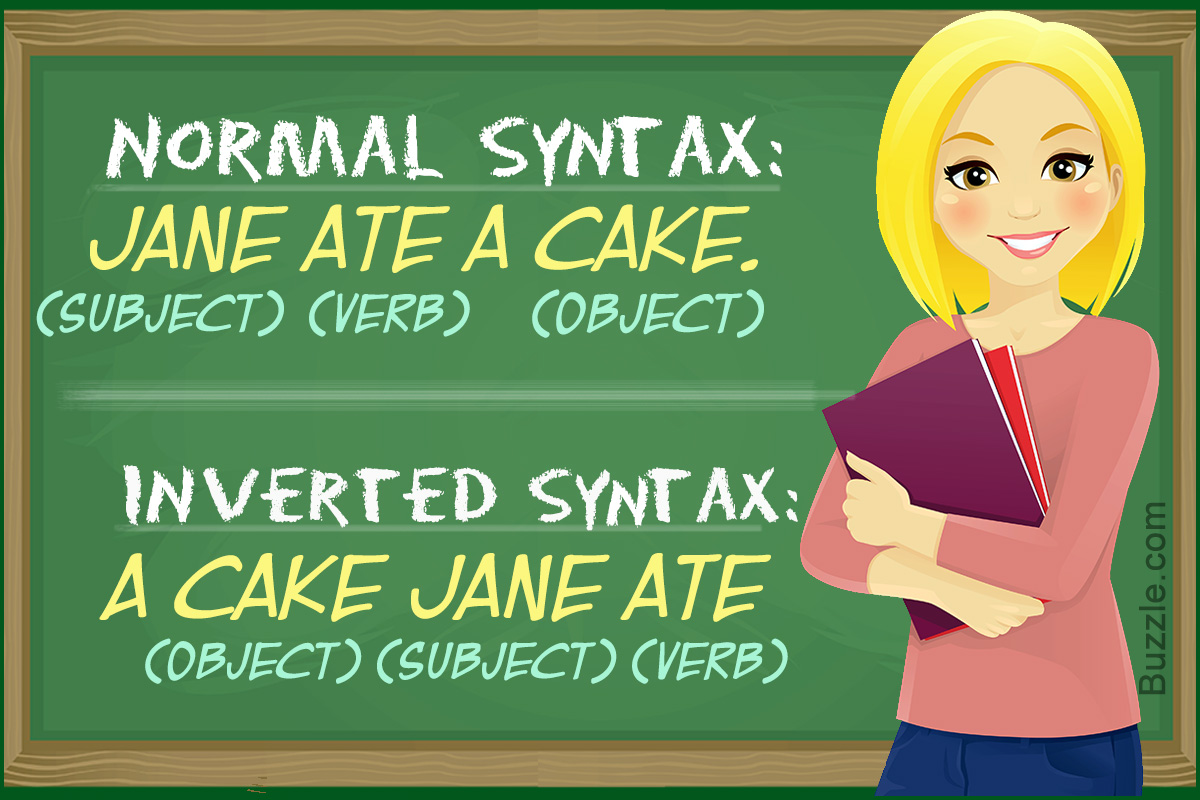 An inverted syntax refers to a change in the pattern of words in the formation of a sentence. It serves as an effective literary device to create rhyming patterns, a specific tempo, a certain mood, or a dramatic effect. This Penlighten post tells you about inverted syntax with the help of some examples.

Shakespeare has made ample use of inverted syntax in his literary works, sometimes making his writings difficult to comprehend. His plays ‘Romeo and Juliet’, ‘Hamlet’, and ‘Macbeth’ have several instances of inverted syntax.

Inverted syntax is a literary device wherein the normal structure of words in a sentence is changed. It implies that the regular syntax has been altered and the words have been put in a format that can appeal to the reader.

Let’s start with a simple example:

A ‘syntax’ is the grammatical order or arrangement of words, as the rules prescribe. In English, the syntax is usually in the SVO format (S – Subject V – Verb O – Object)

Normal syntax: Jane ate a cake.
The format is SVO in this case.

Inverted Syntax: A cake Jane ate
This is the OSV format.

The use of inverted syntax in literary works or poems has many effects, the most common ones being:

❏ It helps give emphasis to a particular part of the sentence.
❏ It gives a dramatic effect while reading and the reader can visualize the situation better.
❏ In poetry, it helps in creating a rhyming pattern.
❏ It amuses the reader.

Let’s take the help of an example to understand the effect of using inverted syntax:

The difference in the sentence formation of the normal format and inverted format, is clearly visible. The dramatic effect which is created in the inverted format, beautifies the poem and displays the plight of the bird as well as the queen in a more effective manner. Both are pampered and spoiled in riches. However, nothing can buy the taste of freedom in this world, is what the poem tries to say. The message has a greater impact because of the use of inverted syntax. Thus, we see how a change in the sentence formation can actually make the message conveyed by the sentence, more effective.

‘Romeo and Juliet’ by Shakespeare

Inverted syntax is commonly used in poetry to create a rhythmic effect.

‘Stopping by Woods on a Snowy Evening’ by Robert Frost

‘All in green went my love riding’ by E. E. Cummings

Inverted Syntax : “All in green went my love riding”
Normal Syntax : “My love went riding all in green.”

Yoda’s Use of Inverted Syntax

The fictional character of Star Wars series, Yoda, speaks mostly in inverted syntax. His quirky language has become quite a rage, with many grammar teachers trying to take his help in teaching what inverted syntax is.

Some of his famous quotes include:

We hope this article helped you in understanding the meaning of inverted syntax. If you speak in the Yoda language, as you may like to call it, share with us the inverted syntax phrases that you use or know of. For that, use the comments section below.