The Perfect Explanation of Parallel Syntax With Great Examples

Parallel syntax refers to using a repetitive or similar pattern in the grammatical construction of the words in a sentence, for emphasis on an idea and to convey that the ideas are of equal importance. To help you understand this concept, we give you an explanation of parallel syntax with the help of some examples. 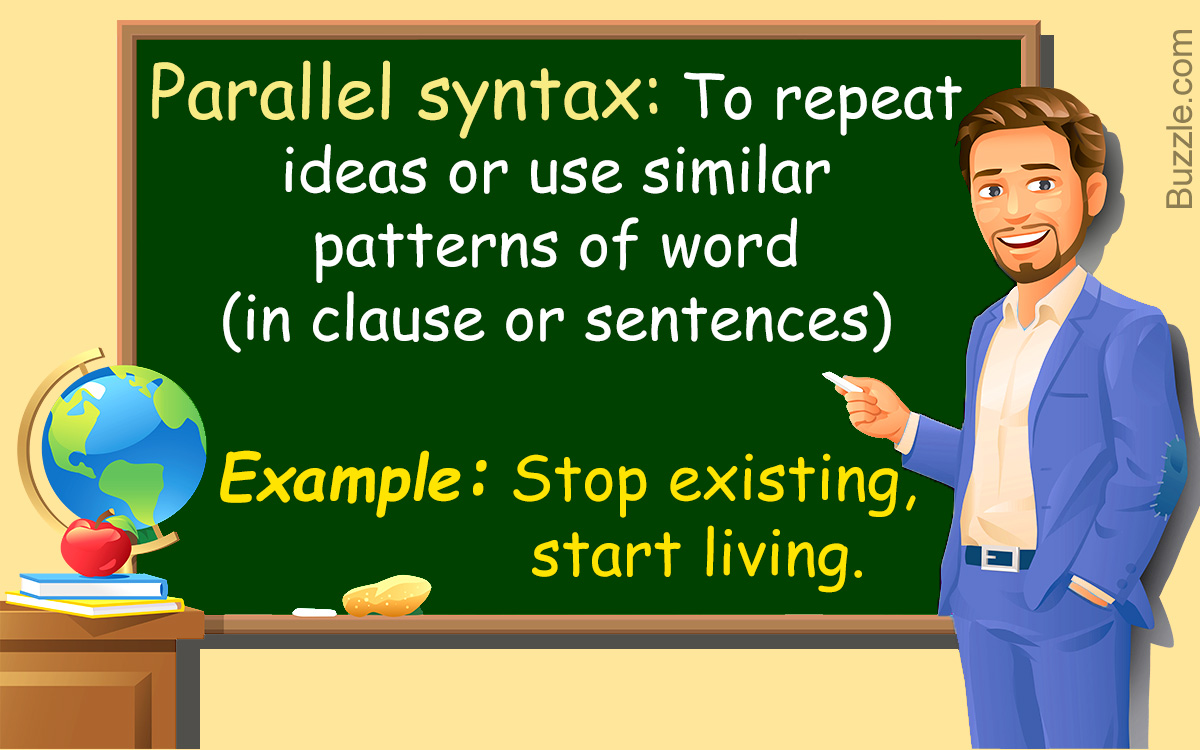 Parallel syntax refers to using a repetitive or similar pattern in the grammatical construction of the words in a sentence, for emphasis on an idea and to convey that the ideas are of equal importance. To help you understand this concept, we give you an explanation of parallel syntax with the help of some examples.

Parallel syntax is a rhetorical device that is used to give equal importance to some of the words in a sentence, so that the tone of the sentence appears right. This is the feature of parallelism, i.e., it creates an appropriate rhythmic effect in a sentence. It also keeps the reader focused on the central idea of the sentence. It can improve clarity. Similar ideas can be expressed in a more effective way. It also leads to balancing of thoughts. While writing songs too, parallelism helps to make the lyrics more memorable, and easy to grasp. Such parallel structures can also be found in the Bible and other literary works.

Here, ‘reading books’ does not go well with the sentence formation. It does not appear synchronized. It looks awkward in the sentence structure, and fails to have the right impact.

Sounds incorrect, doesn’t it? It also sounds unnatural while reading because the construct ‘be confident and passionate’ does not go in sync with ‘must have faith’. Parallel structure refers to the use of a similar pattern of words and one should be able to read it in a smooth manner. This does not happen in the case above, as the pattern of words changes in the middle of the sentence.

Example #4
I came, I saw, I conquered.
This is a classic example of parallel syntax, wherein there is repetition to create parallelism and give equal importance to all the three words.

Example #5
We keep moving forward, opening new doors and doing new things, because we are curious and curiosity keeps leading us down new paths. ― Walt Disney.

The words ‘moving forward’, ‘opening new doors’, and ‘doing new things’ appear to be in sync with each other, due to the parallel structure, thus giving equal importance to all the three verbs.

Famous Quotes that Use Parallel Structure

“There are two mistakes one can make along the road to truth – not going all the way, and not starting.” ― Buddha

“Wisdom ceases to be wisdom when it becomes too proud to weep, too grave to laugh, and too selfish to seek other than itself.” ― Kahlil Gibran

“If you can’t fly then run, if you can’t run then walk, if you can’t walk then crawl, but whatever you do you have to keep moving forward.” ― Martin Luther King Jr.

From ‘The Great Gatsby’ by F. Scott Fitzgerald

“He had thrown himself into it with a creative passion, adding to it all the time, decking it out with every bright feather that drifted his way.”

“Thirty–the promise of a decade of loneliness, a thinning list of single men to know, a thinning brief-case of enthusiasm, thinning hair.”

From Walt Whitman’s poetry: ‘Song of Myself’

The feeling of health, the full-noon trill, the song of me rising from bed and meeting the sun.

We hope that the above examples will help you in understanding parallel syntax, and avoiding a faulty syntax while writing.