Homeric simile is one of the literary devices that was thought to be devised by the great epic poet, Homer. This Penlighten post explains Homeric simile with examples. 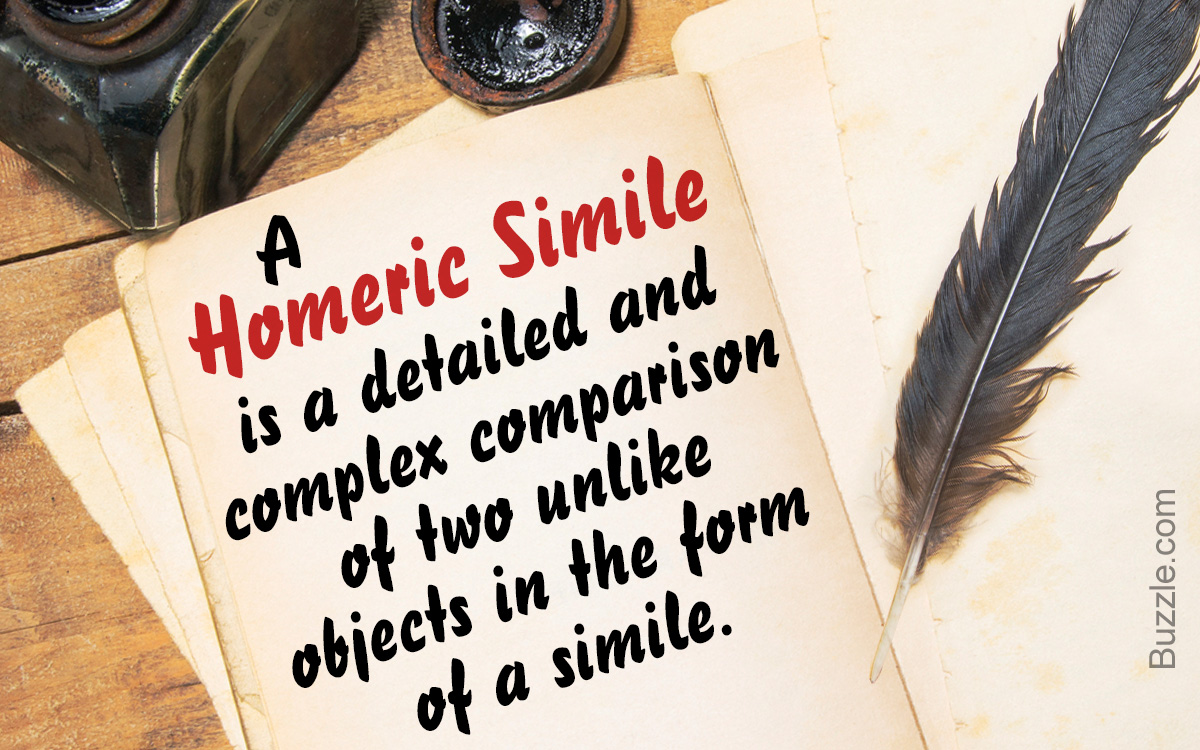 Homeric simile is one of the literary devices that was thought to be devised by the great epic poet, Homer. This Penlighten post explains Homeric simile with examples.

There are around 200 Homeric similes in the Illiad and around 40 in the Odyssey.

A figure of speech or a literary device, “simile” is used in text to make a comparison and show similarities between two different things. Resemblance is shown with the help of words such as “like” and “as.” Similes can be often seen in romantic poetry where a poet compares his love or his beloved to beautiful things in the world. This figure of speech makes the comparison more vivid and easy to understand. For example, Scottish poet Robert Burns explains his love to be “my love is like a red’ red rose.“

In A Glossary of Literary Terms by M. H. Abrams, Homeric simile is described in this way―Epic Similes are formal, sustained similes in which the secondary subject, or vehicle, is elaborated far beyond its specific points of close parallel to the primary subject, or tenor, to which it is compared.

Homeric simile is called epic simile as well. The first recorded use of this type of simile was found in two of Homer’s greatest epics; hence, the name. It is considered as the most prestigious type of simile. As it is used in epics, which are always given high status in poetry, Homeric similes used in them are also considered as esteemed. They occur during moments of high actions and emotions, especially in a battle.

It is a type of simile that includes a detailed comparison of two objects. The comparison is usually complex that unfolds over the course of many lines. The extended comparison reveals unexpected likeliness between two seemingly different things. According to Samuel E. Bassett, this type of simile is used to supply details, to amplify the narration, to make it more vivid and actual, to make it clear, and to vary the monotony.

Though the epic simile was invented by Homer, several other authors can be seen using it in their writing. According to A Glossary of Literary Terms, “This figure was imitated from Homer by Virgil, Milton, and other writers of literary epics, who employed it to enhance the ceremonial quality and wide-ranging reference of the narrative style.” Let us see some examples in literature to understand this figure of speech better.

Homeric Simile in the Illiad

The Illiad is an ancient Greek epic poem credited to Greek poet Homer. The story of the poem is set during the Trojan war and narrates the events of a few weeks before the final year of the war.

“As a snake in the hills, guarding his hole, awaits a man- bloated with poison, deadly hatred seething inside him, glances flashing fire as he coils round his lair.”

As when in the sky the stars about the moon’s shining
are seen in all their glory, when the air has fallen to stillness,
and all the watch places of the hills are clear, and the high shoulders,
and the ravines, as endless bright air spills from the heavens,
and all the stars are seen, to make glad the heart of a shepherd;
such in their numbers blazed the watchfires….

Examples in the Odyssey

The Odyssey, also written by Homer, is considered as a sequel to the epic poem Illiad. The poem revolves around Odysseus and his journey back home after the fall of Troy.

“I drove my weight on it from above and bored it home like a shipwright bores his beam with a shipwright’s drill that men below, whipping the strap back and forth, whirl and the drill keeps twisting, never stopping –So we seized our stake with it fiery tip and bored it round and round in the giant’s eye.

“…its crackling roots blazed and hissed – as a blacksmith plunges a glowing ax or adze in an ice-cold bath and the metal screeches steam and its temper hardens – that’s the iron’s strength – so the eye of Cyclops sizzled round that stake.”

“Her mind in torment, wheeling like some lion at bay, dreading the gangs of hunters closing their cunning ring around him for the finish.”

Epic Simile in the Aeneid

The Aeneid is a Latin epic poem written in 29 and 19 BCE by Roman poet Virgil. The prom revolves around a Trojan hero Aeneas’s journey from Troy to Italy and Trojans’ victorious war with the Latins.

Just as often when in a great crowd a riot has arisen
and the common throng rages in their souls;
and now torches and stones fly, and frenzy supplies the arms;
then, if by chance they have seen some man
important in loyalty and services, they are silent and stand with ears raised;
that man rules their minds with words and calms their hearts.

In that season of the youthful year
when the sun cools his locks beneath Aquarius
and the dark already nears but half the day,
and when the hoarfrost copies out upon the fields
the very image of her snowy sister –
although her pen-point is not sharp for long –
the peasant, short of fodder, rises,
looks out, and sees the countryside
turned white, at which he slaps his thigh,
goes back indoors, grumbling here and there
like a wretch who knows not what to do,
then goes outside again and is restored to hope,
seeing that the world has changed its face
in that brief time, and now picks up his crook
and drives his sheep to pasture.

Cerberus, a beast fierce and hideous, with three throats barks like a dog over the people that are immersed there; he has red eyes, a beard greasy and black, a great belly, and clawed hands, and he scars and flays and rends the spirits.

Paradise Lost is a 17th-century epic poem written by the English poet John Milton. It revolves around the Biblical story of the Fall of Man.

His legions-angel forms, who lay entranc’d
Thick as autumnal leaves that strow the brooks
In Vallombrosa, where th’ Etrurian shades
High over-arch’d embow’r; or scatter’d sedge
Afloat, when with fierce winds Orion arm’d
Hath vex’d the Red-Sea coast, whose waves o’erthrew
Busiris and his Memphian chivalry,
While with perfidious hatred they pursu’d
The sojourners of Goshen, who beheld
From the safe shore their floating carkases
And broken chariot-wheels: so thick bestrown,
Abject and lost, lay these, covering the flood,
Under amazement of their hideous change.

Part curb their fiery steeds, or shun the goal
With rapid wheels, or fronted brigades form
As when to warn proud cities war appears
Waged in the troubled sky, and armies rush
To battle in the clouds, before each van
Prick forth the aery knights, and couch their spears
Till thickest legions close; with feats of arms
From either end of Heaven the welkin burns