How to Write an Effectual Exposition in Fiction

Exposition is the first step to write fiction, as it refers to the beginning of a story. Though deemed as difficult, it is quite interesting to write it. Penlighten tells you how to write an effective exposition in fiction.

Home / Uncategorized / How to Write an Effectual Exposition in Fiction 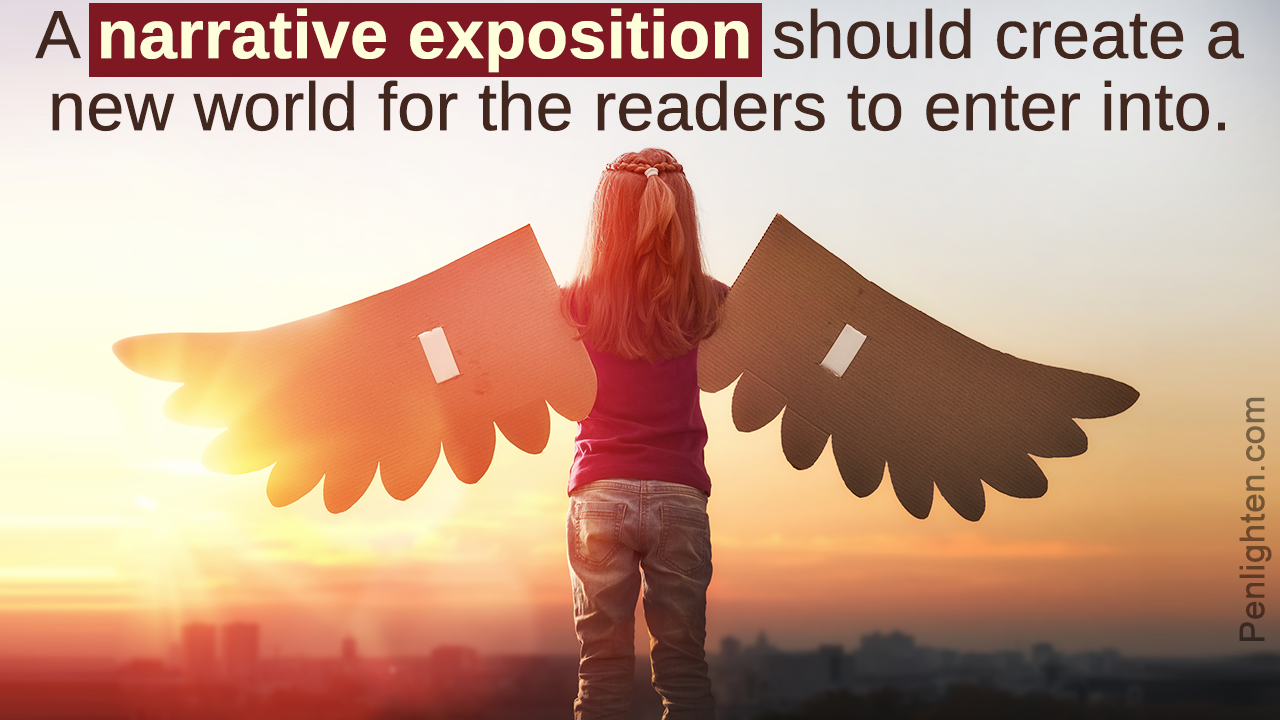 Exposition is the first step to write fiction, as it refers to the beginning of a story. Though deemed as difficult, it is quite interesting to write it. Penlighten tells you how to write an effective exposition in fiction.

Expository writing is one of the four rhetorical modes. Its purpose is to set the main plot of a story.

As children, we have read countless stories starting with a phrase, “Once upon a time…“. This is usually followed by an introduction to the main characters of the story, where they live, how old they are, what they do, their nature, etc. Let us take an example of the famous fairytale Goldilocks and the Three Bears.

Though there are some variations of this story, it is generally seen starting with the phrase, “once upon a time.” In this version of the story, the author introduces the main characters i.e. the three bears. He tells us about where they live and what their routine is. The use of ‘once upon a time’ tells us that the story took place a long time ago. The author prepares us for the conflict that is going to arise as Goldilocks enters the scene. This is how an exposition sets the plot of the story.

An exposition is mainly written in fiction as the means to create a new world for the readers to enter into. It becomes important for him to educate the readers about that world, the people, their back stories, etc. According to a German playwright and novelist, Gustav Freytag, the literary element of exposition is where the structure of a story begins. It is necessary to provide the major chunk of information here, to help the readers prepare for the main events of the story. Let us see what steps a writer has to take in order to write an effective exposition for his fictional work.

1. Explain the Setting
Describing the setting of the story helps the writer set the backdrop of his story. Here, the writer should give the place and time of the events in the story. He should describe the place where the story is taking place.

The Ways of Writing an Exposition in Fiction
There are two main ways with which an exposition can be written. They are: Infodumping and Including.

◆ In infodumping, all the information regarding the characters, setting, and conflicts is written in the beginning of the story. The information, as the name suggests, is dumped on the readers.

◆ In the Including technique, the information is included in the story through dialogs, flashbacks, characters’ thoughts, details, or the narrator telling the back story.

Let us take an example from Old Man and the Sea by Earnest Hemingway.

He was an old man who fished alone in a skiff in the Gulf Stream and he had gone eighty-four days now without taking a fish. In the first forty days a boy had been with him. But after forty days without a fish the boy’s parents had told him that the old man was now definitely and finally salao, which is the worst form of unlucky, and the boy had gone at their orders in another boat which caught three good fish the first week. It made the boy sad to see the old man come in each day with his skiff empty and he always went down to help him carry either the coiled lines or the gaff and harpoon and the sail that was furled around the mast. The sail was patched with flour sacks and, furled, it looked like the flag of permanent defeat.

The old man was thin and gaunt with deep wrinkles in the back of his neck. The brown blotches of the benevolent skin cancer the sun brings from its reflection on the tropic sea were on his cheeks. The blotches ran well down the sides of his face and his hands had the deep-creased scars from handling heavy fish on the cords. But none of these scars were fresh. They were as old as erosions in a fishless desert.

Everything about him was old except his eyes and they were the same color as the sea and were cheerful and undefeated.

Here, the writer establishes the setting of the story in “a skiff in the Gulf Stream.” The writer tells us the exact number of days that the old man could not catch a fish. That number shows the gravity of the situation.

The writer describes the old man as well. The gauntness, wrinkles, blotches, and scars tell us the old man’s difficult life story. The term “fishless desert” tells us that may be that was not the first time he couldn’t catch a fish for several days. However, to show his positive attitude, the writer has compared his eye color to the sea’s. This shows the beautiful side of the old man that is truly inspirational. This also creates a soft corner for the old man, in our minds.

Hemingway’s beautiful exposition for this novel, sets the mood and theme of the story. It gives all the necessary information regarding the setting and the characters and prepares us for the rest of the story.

Tips to Write a Good Exposition in Fiction
1. The writer should first judge the length of his fictional work. It helps him decide how much he needs to write for the exposition. For example, for short stories, the exposition should be crisp and short. On the other hand, for fictional novels, the exposition can go on for a few pages.

2.The writer should remember the four Ps before writing an exposition for his story. They are Plausibility, Pacing, Point of View, and Pertinence.

◆ Plausibility: Sometimes, a writer tends to make a character say something that he/she already knows for the readers’ benefit. However, it is not plausible for a character to say something that can be considered unnatural. For example, a couple will not call each other “husband” and “wife.” However, for a reader to know their relation, a writer can make the characters mention their relation in some way.

◆ Point of View: The exposition should be based on the point of view with which the writer is writing the story. If it is in the first person narration, the information that is provided in the exposition will be from the character’s point of view. The writer will write only those facts, which are known by the character. Those facts will be as biased as that character is. However, if the story is written in the third person narration, the writer can provide any information known by him.

3. The writer should use different ways to write an exposition. For example, for a descriptive novel, the writer can write some information in the beginning. However, for a murder mystery, the introduction of the murder might be provided through dialogs or flashbacks.

4. The writer should always consider if the exposition is really needed for his fictional work. If the readers don’t need to know about a particular character or incident, there is no need to inform the readers about them in the beginning of the story. If that particular character or incident is going to affect the plot, it is necessary to include it in the exposition.

We hope this article helps budding writers in coming up with an effectual exposition for their stories.