'For never was a story of more woe than this of Juliet and her Romeo.' Romeo and Juliet ranks amongst the Bard's most famous works, if not the finest. Penlighten draws up a list of characters in Romeo and Juliet in order of appearance. 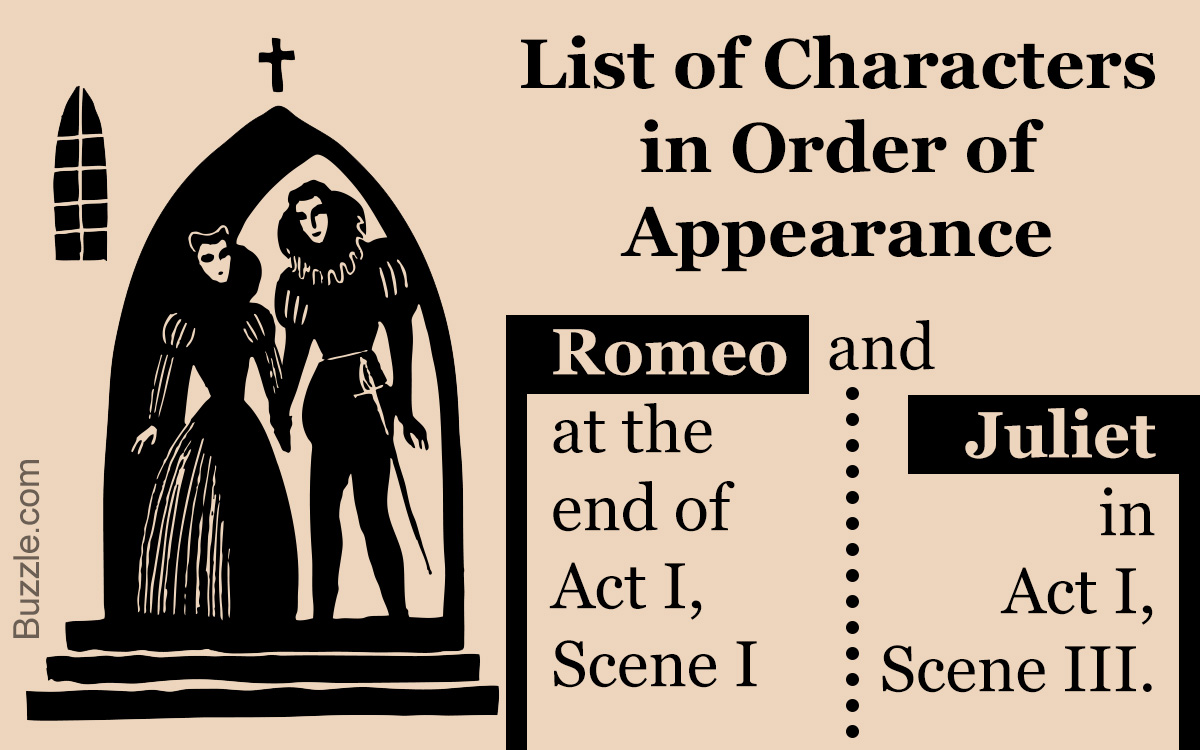 ‘For never was a story of more woe than this of Juliet and her Romeo.’ Romeo and Juliet ranks amongst the Bard’s most famous works, if not the finest. Penlighten draws up a list of characters in Romeo and Juliet in order of appearance.

Romeo and Juliet has been widely accepted to be an epic romance―especially referring to its beautiful depiction of the first flushes of young love. However, Juliet is not Romeo’s first love, and certainly not the first Capulet he fell for either. That honor goes to Rosaline, a niece of Capulet, and an unseen character in the play. In fact, Romeo first spots Juliet while trying to actually look for Rosaline at a ball hosted by the Capulets.

“Two households, both alike in dignity,
In fair Verona where we lay our scene,
From ancient grudge break to new mutiny,
Where civil blood makes civil hands unclean.
From forth the fatal loins of these two foes
A pair of star-crossed lovers take their life…”

And thus begins the most famous tale of tragic love ever penned―by one of the most prolific writers no less. The play opens with this poetic prologue―delivered by a resounding chorus. The first characters to arrive on stage are Sampson and Gregory, both servants to the Capulets, who break into a fight with the serving men, Abram and Balthazar, who belong to the family of Montague. The scene fulfills the purpose of introducing the audience to the deep-rooted hatred harbored for each other by the two clans.

Before we move on to the list of characters in the order they appeared in the play, here is a short introduction of the main players, sorted by family allegiance.

Romeo and Juliet as we now know, is among William Shakespeare’s most renowned tragedies. A story of ‘star-crossed lovers’, its literary impact has influenced several creative heads in the centuries that followed. The play seemed to have struck a chord, especially with those, like the protagonists, who have begun to experience the first flushes of young love.

Juliet Capulet
“O Romeo, Romeo! Wherefore art thou Romeo?
Deny thy father and refuse thy name;
Or, if thou wilt not, be but sworn my love,
And I’ll no longer be a Capulet.”

Shakespeare’s Juliet is documented to be a 13-going-on-30 kind of a character, seeing as she instantaneously makes the shift from a doe-eyed teenager to a tragic heroine with effortless ease. Juliet remains in the know about the apparent foolhardiness of their love, saying,
“It is too rash, too unadvis’d, too sudden.”

She is also chillingly aware of her predicament when Romeo kills her cousin Tybalt for having slain his friend Mercutio:
“My husband lives, that Tybalt would have slain,
And Tybalt’s dead, that would have slain my husband.
All this is comfort.”

And yet, remains steadfastly loyal to the love of her life―her beloved Romeo.

Romeo Montague
Romeo’s immaturity provides a generous dose of comic relief in the first act―he has eyes only for Rosaline in the beginning, and ends up being besotted by Juliet while on a mission to catch a glimpse of the former. He seems to be shaken out of his imprudence the moment he sets eyes upon Juliet,
“Did my heart love till now? Forswear it, sight! / For I ne’er saw true beauty till this night.”

His attempted suicide upon hearing of his banishment gives us another peek into his stuck-up self. It takes a bit of prodding from Friar Laurence for Romeo to think of Juliet―particularly about their future together, and for him to continue living for her sake.

As he gets the news of Juliet’s death, his only wish remains to join her in eternal rest,
“Well Juliet, I will lie with thee tonight.”

So, was it ill-fated lovers or ill-fated timing? Our fast-paced lives today can make a mockery of the sublimeness that is Romeo and Juliet. All said and done, it still remains one of Shakespeare’s most popular plays till date―and with its palpable element of pathos no wonder that it is.