Pathetic fallacy has become such an important part of literature over the years, that we even forget to notice it though it's right there in that sentence we're reading! Penlighten tells you more about pathetic fallacy in literature, along with some famous examples of the same. 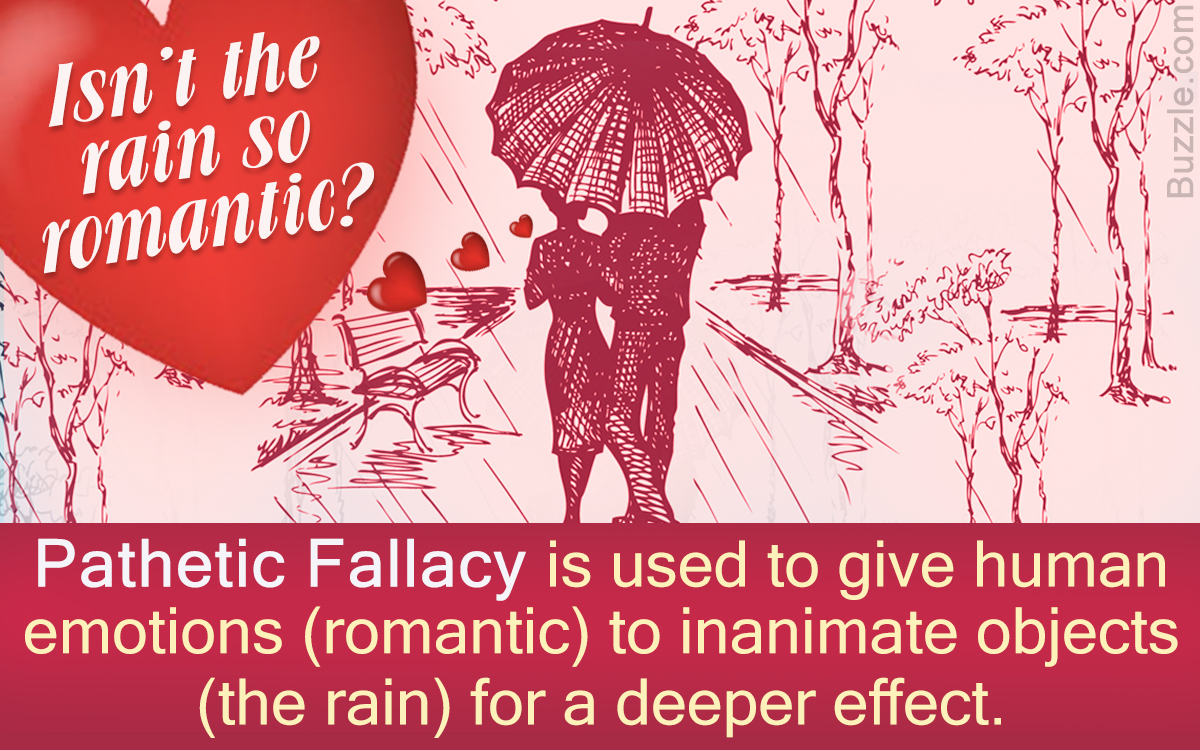 Pathetic fallacy has become such an important part of literature over the years, that we even forget to notice it though it’s right there in that sentence we’re reading! Penlighten tells you more about pathetic fallacy in literature, along with some famous examples of the same.

Figures of speech and other literary techniques have been around since a long, long, time and have been used frequently by authors and poets alike, to give a more dramatic feel to their work. These are often used to emphasize an element of the story or the poem, so as to help the reader understand the exact expression of that one element. Hence, figures of speech and other literary techniques are nothing but devices used to fashion or style a particular element more than the others, or more than what is coming across without them.

✦ Pathetic fallacy is a literary device that is used by a writer, or a poet, to give human emotions or qualities to inanimate objects, or animals, or the environment. For instance, ‘the dancing flowers’ is an example of pathetic fallacy that attributes the human quality of dancing to flowers, which don’t really ‘dance’. But with the added element of dancing, the reader gets a more dramatic feel of the sentence, and the fact that the flowers are beautiful is emphasized too. It is also a good way of reflecting the mood of the speaker, that character, or the general setting of the story or the poem.

✦ Pathetic fallacy is sometimes confused with the figure of speech that is used for a similar reason: personification. Though their reason of usage is more or less the same, the two devices differ in their functioning. Pathetic fallacy could be called a kind of personification since it gives human emotions and qualities to inanimate objects and the non-human environment. Personification, however, is a broader literary technique. It is used to give human qualities to not only inanimate objects and the non-human environment, but it is also attributed to abstract thoughts and ideas. For instance, ‘opportunity doesn’t knock twice’ is an example of personification, as it attributes the human quality of ‘knocking’ to opportunity, which is an abstract concept.

✦ The origin of the term ‘pathetic fallacy’ has been credited to British critic John Ruskin, who introduced and explained it in his book, Modern Painters. Pathetic fallacy, according to Ruskin, was a depiction of ’emotional falseness’, or false emotions that are experienced when someone’s perception about an animate or inanimate thing is highly influenced by heightened emotions.

Basically, when someone is experiencing certain heightened emotions, his/her perception about things around them is automatically influenced, according to Ruskin. For instance, when a person is very happy and positive, the flowers around him seem to be ‘dancing’. Over time, the meaning of this term has significantly changed, but this literary device has not only survived, but has also firmly embedded itself in the styles of writers and poets.

Like we said earlier, the usage of pathetic fallacy has increased to such an extent that many of us barely even notice it anymore, though it might be right in front of us. Pathetic fallacy is now no longer just a literary device, but is also used in arenas such as music, movies, and other forms of entertainment. Though this term was coined in the 1800s, it has been in use since centuries before Ruskin coined the term. Given below are a few famous examples of pathetic fallacy.

* The usage of pathetic fallacy in the examples is highlighted for convenient understanding.

I pray thee, good Mercutio, let’s retire.
The day is hot; the Capulets, abroad;
And if we meet we shall not ‘scape a brawl,
For now, these hot days, is the mad blood stirring

The rain cooled about half-past three to a damp mist, through which occasional thin drops swam like dew. Gatsby looked with vacant eyes through a copy of Clay’s Economics, starting at the Finnish tread that shook the kitchen floor, and peering toward the bleared windows from time to time as if a series of invisible but alarming happenings were taking place outside. Finally he got up and informed me, in an uncertain voice, that he was going home.

It was on a dreary night of November that I beheld the accomplishment of my toils. With an anxiety that almost amounted to agony, I collected the instruments of life around me, that I might infuse a spark of being into the lifeless thing that lay at my feet. It was already one in the morning; the rain pattered dismally against the panes, and my candle was nearly burnt out, when, by the glimmer of the half-extinguished light, I saw the dull yellow eye of the creature open; it breathed hard, and a convulsive motion agitated its limbs.

The night has been unruly. Where we lay,
Our chimneys were blown down and, as they say,
Lamentings heard i’ th’ air, strange screams of death,
And prophesying with accents terrible
Of dire combustion and confused events
New hatched to the woeful time. The obscure bird
Clamored the livelong night. Some say the Earth
Was feverous and did shake.

I Wandered Lonely as a Cloud- William Wordsworth

I wandered lonely as a cloud
That floats on high o’er vales and hills,
When all at once I saw a crowd,
A host, of golden daffodils
Beside the lake, beneath the trees,
Fluttering and dancing in the breeze.

✦ Pathetic Fallacy in Movies and Music ✦

✦ Disney movies are more famous for the use of pathetic fallacy in them, which provide an insight into the character’s moods, emotions, and thoughts at the time of that scene. For instance, the rainy, gloomy skies during the rule of the evil Scar in The Lion King are symbolic of the bad times that are to befall the Pride Lands, where the lions have to live with the hyenas. Another good example of the same would be the sunny days, with birds chirping and singing, the lead characters dancing and laughing, that represent the happiness in the movie at that time. (This can be observed in most Disney movies.)

✦ Music artists quite frequently resort to using pathetic fallacy when composing their songs, as this device helps them give the words a dramatic, powerful feel which would perhaps be felt lesser if pathetic fallacy was not used. Most songs that you will come across will have a line or two that uses pathetic fallacy. A classic example of this would be ‘While My Guitar Gently Weeps‘ by the Beatles. Pathetic fallacy is present right there in the title, as well as the whole song! The concept of the singer’s guitar ‘weeping’ gives a more dramatic, heartfelt effect to the whole song.

Pathetic fallacy thus not only helps to emphasize the importance of a certain element, but also helps readers (or those watching/listening) understand abstract emotions clearly. Additionally, by employing pathetic fallacy, writers can help their readers look at things from a newer, perhaps better perspective.