A Summary and Analysis of ‘Where Are You Going? Where Have You Been?’

'Where Are You Going? Where Have You Been?' is Oates' most critically discussed work, which became an instant classic in 1966.

Home / Uncategorized / A Summary and Analysis of ‘Where Are You Going? Where Have You Been?’ 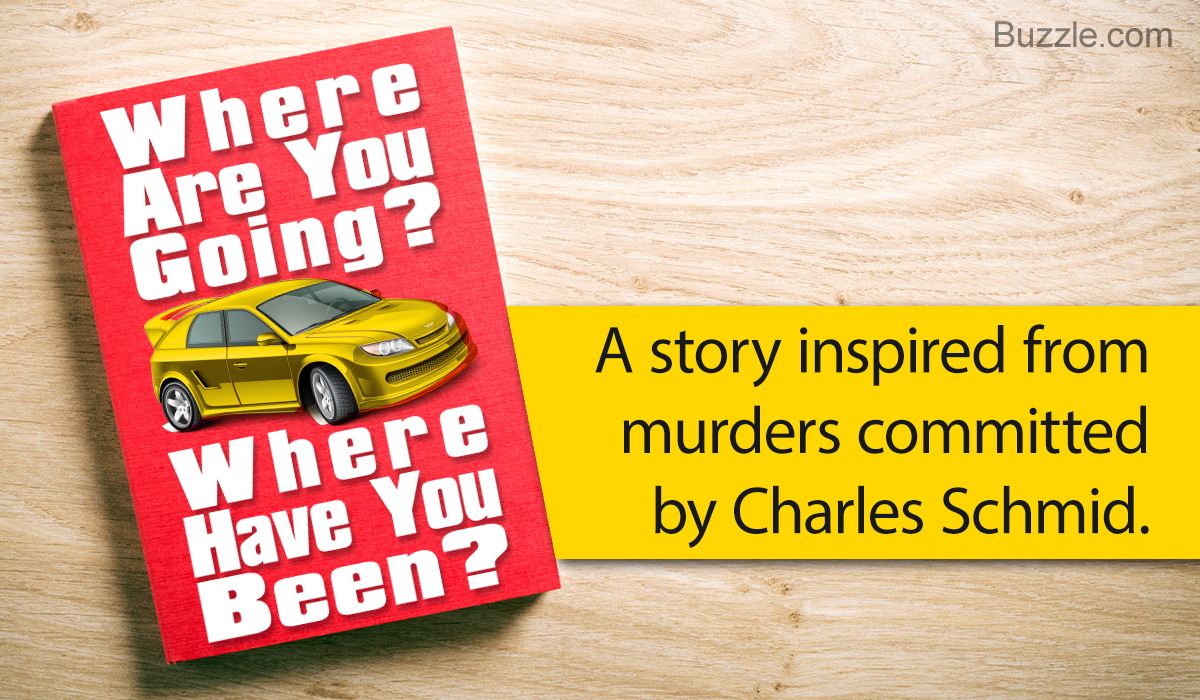 ‘Where Are You Going? Where Have You Been?’ is Oates’ most critically discussed work, which became an instant classic in 1966.

The story to is dedicated to Bob Dylan’s song, It’s All Over Now, Baby Blue.

The story “Where Are You Going, Where Have You Been?”, penned down by Joyce Carol Oates, is based on the tale of Charles Schmid, a killer who was written about in the 1966 Life Magazine issue. She was pretty taken in by this character who was described to have stuffed boots and a clumsy gait. Yet, she found him dangerous as the strange character managed to charm three women and kill them. This character baffled her to such an extent that she used Schmid as the basis for her short story.

The story is set in the 1960s’ America, post-World War II. It was the time when the air was heavily influenced by the changes brought about by the civil rights movement, and on the brink of the hippie culture. Teenagers were highly mesmerized by popular rock bands and movies. These winds of change laced the air with topics, viz., adolescent sexuality, feminism, and sexual freedom, which were the issues of that time.

The author introduces the readers to a teenage girl (Connie) going along her merry way, but sadly attracting the attention of a shady man who enters her life, threatening to change it for good.

Unlike many stories of that time, this one has an open-ended ending. It leaves the fate of Connie unknown, with only a statement, “vast sunlit reaches of the land“, keeping the readers begging to know the fate of poor, naive Connie.

Connie, like many other teenagers, is going through her adolescent, rebellion phase, trying to appear wiser than she really is. She is often arguing with her sister and mother and disregarding her family commitments. She spends most of pastime by picking up boys at a drive-in restaurant, hanging out with her best friend, and listening to music. She is highly influenced by the popular music and lives of the rich and famous, and often daydreams of love and romance as shown in the movies and mentioned in songs.

One night, as usual, Connie and her best friend are dropped off at a mall by the friend’s father. They escape from the mall and go across the highway to a drive-in restaurant. They meet a boy named Ernie. Connie soon leaves her friend sitting at the drive-in and goes out with Ernie to his car. On their way to the car, Connie sees a creepy guy with a gold-colored convertible staring at her. The guy gestures something with his finger and says, “Gonna get you baby“. Ignoring him, Connie and Ernie spend hours together visiting different restaurants, and then at an alley. He later drops Connie back to the drive-in restaurant, where they had met. Later, Connie and her friend return to the mall to be picked up by her friend’s father.

The next day is a Sunday. Connie’s family goes for a barbecue at an aunt’s house, leaving Connie home alone.

Soon after, a car pulls up into the driveway and honks. She sees the same gold-colored convertible that she had seen the night before. She recognizes the driver to be the same unpleasant guy. Connie decides to chat with the strange driver. The driver introduces her to his friend, Ellie Oscar and invites her for a ride. She is not easily persuaded.

After casual chit-chat about the car, he introduces himself as Arnold Friend. Arnold then explains to her that he’s learned a lot about her like her name and friends and family, who are out for the day. Connie asks him about his age. He lies and tells her he’s around her age. But she figures that he is around 30 years. Arnold persistently insists on Connie accompanying them on a drive. Soon his talks become sexually explicit, and he describes what he would like to do to her. Connie is shocked and warns him about calling the police. But instead in return, she is threatened that her family would be hurt if she called for help. She comes face to face with the harsh realities of adulthood and begins to cry. Soon, she finds herself following Arnold’s every instruction. The story ends ambiguously, with Connie leaving the porch. The author leaves Connie’s fate unmentioned.

Observe that only men in the story drive, and never the women. The fathers, boyfriends, and the villain drive cars. Taking the wheel or driving a car indicates control, empowerment, freedom, and mobility, which women don’t get to enjoy in this story. The only mention of a woman driver is when Arnold mentions a ‘crazy woman driver‘ who left a dent in his car. This indicates that women shouldn’t have the power to lead.

The car that Arnold Friend drives is mentioned as ‘an open jalopy, painted a bright gold‘. It has an outdated phrase painted on its front fender, ‘Man the flying saucers‘. It also has some mysterious numbers painted on its side ‘33, 19, 17‘. Many literary critics believe these numbers could be the ages of Arnold’s victims.

The car also shows the self-absorbed mentality of the owner. Arnold has a picture of himself spray-painted on the side of his car. The picture makes him look like a ‘pumpkin‘, which is in close association to the jack-o’-lantern.

Music plays an integral part in the story as it is constantly blaring in the background. It not only shows the influences of pop culture, but also the cloudy judgment, unrealistic hopes, dreams, sex, and sexual desire. Arnold uses the lyrics of popular songs to seduce and connect with Connie.

Portrayal of Death and the Maiden

The author has often mentioned the Death and the Maiden folktale to be one of her primary influences, where innocent Persephone is mesmerized by Hades, and has to live with him in the underworld for six months of the year.

In this story, Connie takes the role of Persephone and Arnold of Hades. The depiction of the fatal attraction of between the two, that of innocence towards evil and vice versa are closely connected. For example, Connie is drawn towards Arnold’s glare the moment she lays eyes on him at the drive-in restaurant, and she can’t quite take her eyes off him, even after his weird finger gesture.

The car too plays an important role in the game of seduction. From the golden color, to the painted phrases and number, all act like a flame attracting the moth towards him.

Connie is a starry-eyed 15-year-old girl. She is in that rebellious age, trying to have a foothold on maturity and adulthood, pretending to be wiser than she is. She is highly influenced by popular music and movies, and fantasizes about love and romance as shown in the movies. She prefers hanging out with her best friend at a drive-in restaurant and picking up boys. Connie is vain and self-centered like many other teenagers of her age, constantly looking into the mirror, has a fake, nervous giggle, and a flirty voice. She is the ‘pretty’ one in the family, and thus thinks herself to be superior than her mother and older sister. She often fights with them and ignores her family commitments.

She seems a little foolish from the choice she made of stepping out to meet a complete stranger. She is smart enough to know the dangers of going off with a stranger. She asks wise-enough questions regarding his age, and not going over to the other side of the car. However, at the end of the story, Connie is made to see the stark truth about the perception she had about herself and adulthood. She takes a bold step of choosing her family’s safety rather than her own.

Arnold introduces himself as Arnold Friend, which closely hints towards ‘An Old Fiend’. Fiend directly implies to the devil, evil, or demon. He knows the power of his voice and words, and the effect it can have on innocent girls.

There is malice behind his mind control games; he wanted Connie to do as he wills out of free will. When it goes against his will, he indirectly threatens to hurt her family if she didn’t join them. Thus, he ends forcing her without even laying a finger on her. You can observe his need to control when he begins to get sexually explicit with Connie by saying, “…. I’ll hold you so tight you won’t think you have to try to get away or pretend anything because you’ll know you can’t…. and you’ll give in to me and you’ll love me …“. His smooth threats soon pay off, and Connie soon follows.

From the outside, Connie’s family seems like any other ‘normal family’. The story mostly revolves around Connie, with little attention towards her mother and sister, and almost no attention towards her father. However, Arnold makes his vision about her very clear; she is no more than a lover for him, who loves him in return. She is seen as a sex object without a free will.

Connie often portrays herself as a mature woman, paying extra attention to superficial things, viz., her looks. She contradicts her portrayal with her behavior, by sneaking off and meeting boys like Eddie and going into the dark alley alone with him.

However, she is confronted by Arnold Friend who makes her look at adulthood more closely, thus forcing her to leave her childhood and silly adolescent fantasies about love and romance behind her, and to step into realities of a mature woman. She is forced to make a choice between her family and herself.

The story is set in the ’60s, post-World War II, where many were questioning values of life. The civil rights movement and hippie culture pushed many towards experimenting with their sexuality. The story shows a mirror of such a superficial, promiscuity, celebrity-obsessed culture, which plays an integral role on naive minds.

The story – Where Are You Going? Where Have You Been? – like many other stories, takes a closer look at society, culture, and problems. It is a reoccurring story that often keeps showing its ugly side with the rapid disintegration of a solid family structure, teenagers under influences, and perverted minds taking advantage of such situations.

Good Fiction Books to Read: 3 Classics to Add to your Bookshelf