Cacophony is a literary term used to describe words with harsh and inharmonious sounds. Penlighten rolls out a few cacophony examples to help you understand this literary device. 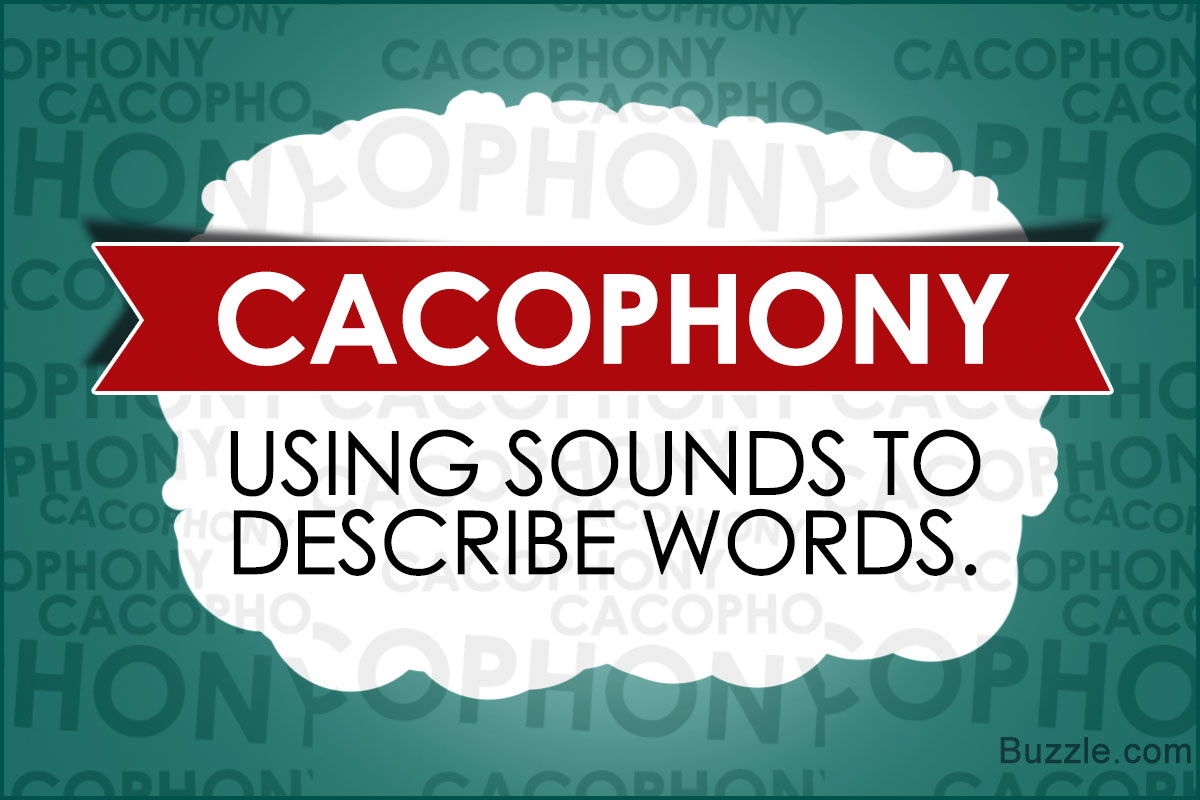 Cacophony is a literary term used to describe words with harsh and inharmonious sounds. Penlighten rolls out a few cacophony examples to help you understand this literary device.

Dishes crashing on the floor, horns blaring in a traffic jam, and people yelling at a construction site are practical examples we might have come across.

Sounds and how they make a person feel are one of the decisive points that causes a literary piece to become popular. When words match together, they create harmony, which makes it pleasurable. Let us take an example of John Keats’ To Autumn.

Season of mists and mellow fruitfulness,
Close bosom-friend of the maturing sun;
Conspiring with him how to load and bless
With fruit the vines that round the thatch-eves run.

When read aloud, a person can feel the words smoothly rolling off his tongue. The words mists, mellow, close, sun, bless, etc., are smooth, pleasant, and musical to the ears. The soothing effect of these words is called Euphony. Its effect is totally the opposite of cacophony, which is jarring or blaring words that are displeasing to the ears. For example, let us look at a few lines from Lewis Carroll’s Jabberwocky.

Twas brillig, and the slithy toves
Did gyre and gimble in the wabe:
All mimsy were the borogoves,
And the mome raths outgrabe.

Carroll uses clashing consonants to create an unpleasant effect, which is the opposite of euphony. When read aloud, the words do not sound harmonious. Such an effect is known as cacophony

► The word originated from a Greek word kakophōnía, which means ‘bad word.’

► According to the Merriam-Webster dictionary, cacophony means unpleasant loud sounds or harsh or discordant sounds.

► In A Glossary of Literary Terms, M. H. Abrams defines cacophony as in cacophony, or dissonance-language which is perceived as harsh, rough, and unmusical-the discordancy is the effect not only of the sound of the words, but also of their significance, conjoined with the difficulty of enunciating the sequence of the speech-sounds.

► He further describes, Cacophony may be inadvertent, through a lapse in the writer’s attention or skill . . . But cacophony may also be deliberate and functional: for humor, . . . or else for other purposes.

► Unlike euphony, cacophony uses combinations of consonants, which need explosive delivery like p, b, d, g, k, ch, sh, etc. These consonants provide a whole unpleasant effect to the words.

► Writers usually try to avoid cacophony for obvious reasons. However, it is sometimes used to invoke a certain desired reaction among the readers. It might be used to describe noisy or dreadful situations. This literary device can be used to give a sense of discomfort or unpleasant situation. On the other hand, it can be used simply to entertain, especially in children’s literature.

To understand the meaning of cacophony further, let us sift through a few examples.

Edgar Allan Poe’s 1984-published narrative poem The Raven uses cacophony to create a supernatural atmosphere. The literary device is also used to describe the mental state of the distraught narrator. For example, take a look at the second line from the fifth stanza: “Doubting, dreaming dreams no mortal ever dared to dream before.” The repetition of the sound “d” in the beginning is unpleasant when said aloud. Likewise, the second last line of the twelfth stanza uses too many “g” sounds. E.g., “What this grim, ungainly, ghastly, gaunt, and ominous bird of yore.”

► In Romeo and Juliet

Romeo and Juliet is William Shakespeare’s most famous tragedy of two star-crossed lovers. Now, there is no way to understand if examples of cacophony in the play are intentionally written or a genuine mistake; however, there are a few seen in the text. For example, here is a line said by Juliet, “I’ll look to like, if looking liking move.” The combination of the firm “k” sound and soft “l” sound is awkward and difficult to say it out aloud.

Macbeth is another tragedy penned by Shakespeare, which is considered dark and powerful, and has examples of cacophony in it. The three witches’ chants like “Double, double toil and trouble” and “Fair is foul, and foul is fair” can be take as examples of cacophony. Another example could be the constant repetition of the sound of knock on the door in the porter’s speech in 3rd scene of the 2nd act.

► In To Brooklyn Bridge

To Brooklyn Bridge is an introductory poem in Hart Crane’s only long poem The Bridge. The poem contains examples of cacophony. Take a look at these lines, “Out of some subway scuttle, cell or loft / A bedlamite speeds to thy parapets, / Tilting there momently, shrill shirt ballooning, / A jest falls from the speechless caravan.” Hart paints a typical New York scene, which is anything but soothing for readers. The strong “b” and “p” sounds create a dark tone.

A writer may use cacophony either intentionally or with some intention. The readers might need to find out why there are harsh, inharmonious, and unpleasant sounding words in the text and how they contribute to the overall mood of the text. Then readers can even find meaning in apparent meaninglessness.