Masterful Use of Foreshadowing in Shakespeare’s Romeo and Juliet

We don't have to read 'Romeo and Juliet' till the end to know what happens to the lovers. He gives us many clues about what is going to happen ahead in the story. This technique is called foreshadowing. Penlighten gives you some examples of foreshadowing in this play by Shakespeare. 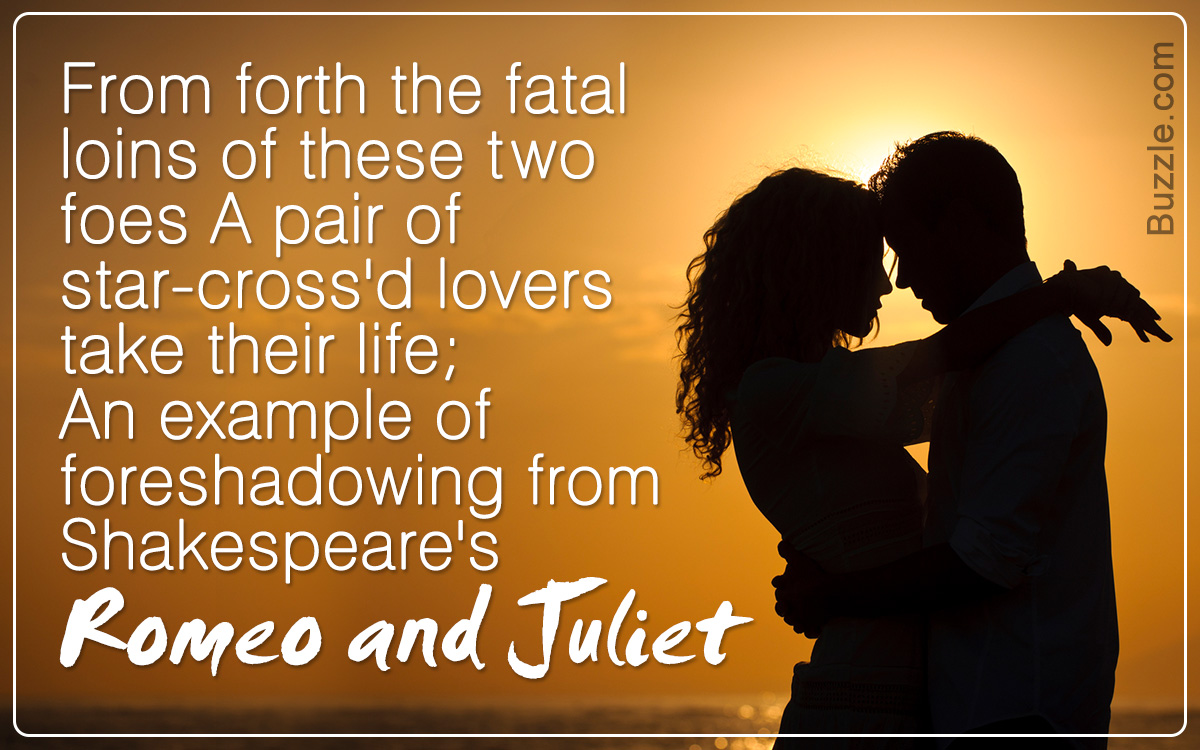 We don’t have to read ‘Romeo and Juliet’ till the end to know what happens to the lovers. He gives us many clues about what is going to happen ahead in the story. This technique is called foreshadowing. Penlighten gives you some examples of foreshadowing in this play by Shakespeare.

Foreshadowing is a literary device that an author uses to warn/hint the readers of something that hasn’t yet happened. One of the early examples of this is the blind prophet’s prophecy about what would happen in the Greek playwright Sophocles’s play Oedipus Rex.

Romeo and Juliet, as we know, is a tragic play written by Shakespeare. It starts off with a fairytale-like meeting of two lovers, the balcony scene, and the promise to stay in love with each other forever. But then, the foolproof plan to escape their feuding families goes awry. It is truly heart-wrenching to see them die in the end. With the death of Romeo and Juliet, even we are reduced to tears. A little warning should have been there.

Come to think of it, Shakespeare does give us hints. They are planted across the play to warn us of the impending doom on the lovers. This is actually a literary device known as foreshadowing. It is a prediction or warning given to prepare the readers about what is going to happen in the play. It builds anticipation and expectations. It is sometimes used to avoid the disappointment caused due to a sudden turn of events.

The use of foreshadowing in Romeo and Juliet serves the same purpose. For example, Shakespeare calls the two protagonists of the play as star-crossed lovers, which means ‘frustrated by the stars’. It is in their fate that they will suffer. With this one phase, Shakespeare provides us with a hint about their fate. Let us look at some examples of foreshadowing from this play.

Romeo and Juliet by William Shakespeare

The play opens with a street fight between Montague and Capulet servants. Amidst this, Romeo of the Montague house meets and falls in love with Juliet of the Capulet family in a party in the Capulet household. Romeo’s presence in the party angers Juliet’s cousin Tybalt who swears to kill him, but is stopped by Juliet’s father who doesn’t want bloodshed in his house.

Then comes the most famous balcony scene where Romeo and Juliet confess their love for each other and decide to get married secretly as it will not be allowed by their families. They get married the next day with the help of Friar Laurence who wishes to end the feud between the two families with the wedding of Romeo and Juliet.

A fight breaks out between Tybalt and Mercutio after Romeo refuses Tybalt’s challenge of duel as he now considers him his kin after the wedding with Juliet. Mercutio dies in the fight that leads Romeo to kill Tybalt. Romeo is exiled by Prince Escalus. However, Romeo spends the night in Juliet’s chamber. In the meanwhile, Juliet’s parents decide to marry her off to Count Paris.

Friar Laurence comes up with a plan to help the lovers. He gives a potion to Juliet that will put her in a coma-like state, and plans to send a message to Romeo who will join her after she wakes up. On the night of her wedding with Count Paris, Juliet drinks the potion and goes into a coma-like state. Everyone presumes her dead, and she is buried in the family crypt. However, the plan does not reach Romeo who, on hearing the news of her death, believes it. He goes to the crypt where he is encountered by grieving Paris. Both fight and Paris dies. Romeo poisons himself and dies. Juliet, on waking up, sees the dead Romeo and kills herself with a dagger. In the end, both the families patch up.

◆ The first warning is given as the play opens. In the prologue, the chorus sings,

Two households, both alike in dignity
(In fair Verona, where we lay our scene),
From ancient grudge break to new mutiny,
Where civil blood makes civil hands unclean.
From forth the fatal loins of these two foes
A pair of star-crossed lovers take their life;
Whose misadventured piteous overthrows
Doth with their death bury their parents’ strife.
The fearful passage of their death-marked love
And the continuance of their parents’ rage,
Which, but their children’s end, naught could remove,
Is now the two hours’ traffic of our stage;
The which, if you with patient ears attend,
What here shall miss, our toil shall strive to mend.

More than foreshadowing, the sonnet in the beginning works as a preview of the play telling us what to expect. The prologue is written as a summary of the main plot of the play. Nonetheless, it warns us that the two families will come together, but at the cost of the death of Romeo and Juliet.

◆ To cheer Romeo up from his love-sickness towards Rosaline, Mercutio says, “Take thou some new infection to thy eye, / And the rank poison of the old will die.” In these lines, Mercutio has compared love with poison that foreshadows the fact that Romeo kills himself with a poison in the end because the love of his life is dead.

◆ As Romeo, Mercutio, and Benvolio are ready to intrude the Capulet house ball, Romeo says,

I fear, too early: for my mind misgives
Some consequence yet hanging in the stars
Shall bitterly begin his fearful date
With this night’s revels and expire the term
Of a despised life closed in my breast
By some vile forfeit of untimely death.
But He, that hath the steerage of my course,
Direct my sail! On, lusty gentlemen.

This is what happens in the rest of the play. Some fateful consequences or a chain of events do begin at that “date” which lead to Romeo’s untimely death. The saddest part is that Romeo does not believe that what he has said is going to be true.

◆ After Tybalt’s attack on Romeo at the ball, he swears, “I will withdraw, but this intrusion shall / Now seeming sweet convert to bitter gall.” The word ‘gall’ means anything that is bitter or a poison. Tybalt in a way makes a prophecy that everything will end due to poison.

◆ The two lovers just cannot live without each other. As she learns about Romeo’s banishment, Juliet says, “I’ll to my wedding-bed; / And death, not Romeo, take my maidenhead!” Juliet is bent upon taking her life as she cannot stay away from Romeo.

◆ Another scene of the balcony foreshadows impending death. As Romeo and Juliet take their farewell after spending a night together, Juliet compares Romeo standing below her balcony to Romeo in a grave. She says, “Methinks I see thee, now thou art below, / As one dead in the bottom of a tomb. / Either my eyesight fails, or thou look’st pale.” Maybe she was seeing the future where both of them meet their end in Juliet’s family crypt.

There are many such examples of foreshadowing that can be found in this play. Shakespeare places them very cleverly so that tension is built and the readers also get an inkling of the tragic ending. If only Romeo and Juliet would have understood these hints.

However, the tragic end of the play made the two lovers immortal in the literary world. As the lines from the play go, “For never was a story of more woe / Than this of Juliet and her Romeo.”