What’s the Difference Between a Soliloquy and a Monologue?

In a story, there are various ways in which a character can deliver a lengthy block of speech. This post does a soliloquy vs. monologue comparison, bringing out the differences between the two literary devices.

Home / Uncategorized / What’s the Difference Between a Soliloquy and a Monologue? 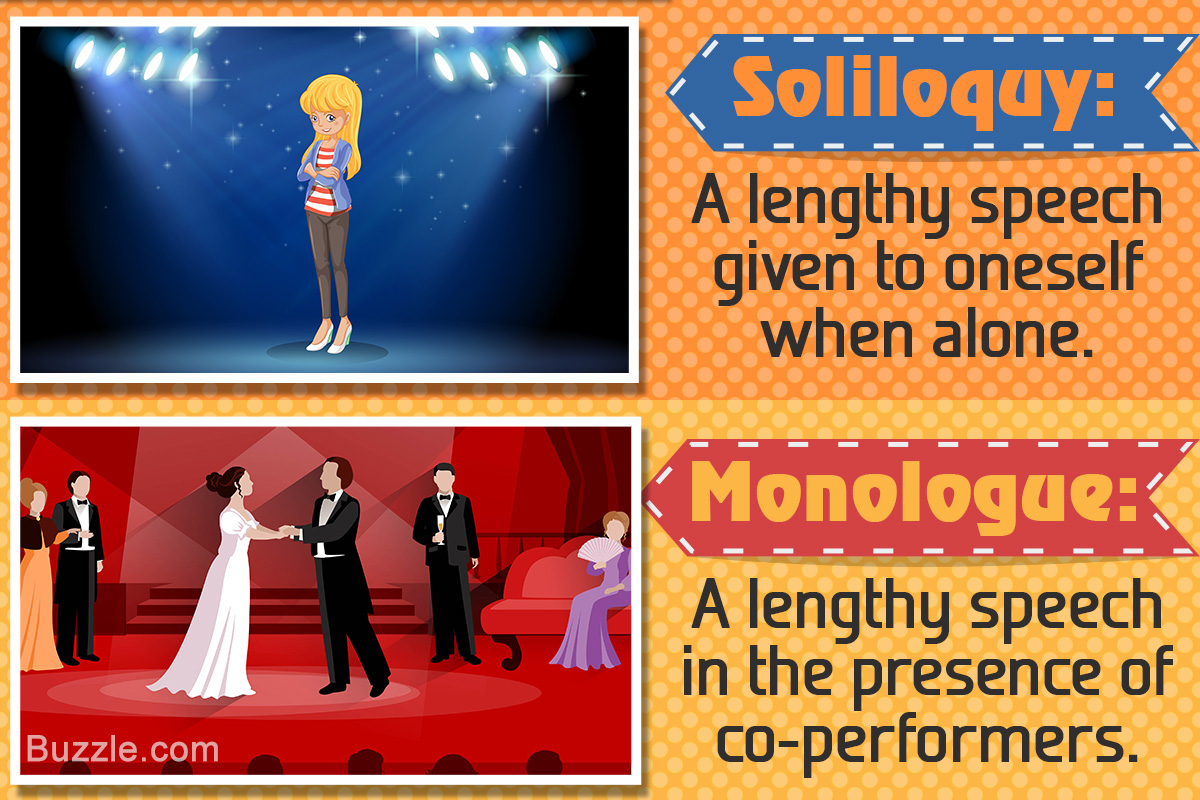 In a story, there are various ways in which a character can deliver a lengthy block of speech. This post does a soliloquy vs. monologue comparison, bringing out the differences between the two literary devices.

Along with a soliloquy and a monologue, a character can give a relatively short speech in which he converses with the off-stage audience through an ‘aside’.

There are a number of layers that can be added to a plot with the help of various literary devices which are available at a writer’s disposal. A few techniques can also come in handy when unraveling some part of the story, which will give the audience a better insight into the proceedings. This can be achieved through a lengthy speech that a character gives, without break in the flow.

Such blocks of dialogs that the characters deliver without any interruption from any other character can be classified as a monologue or a soliloquy. These two methodologies can seem the same, and are indeed very similar, but there are a few subtle differences that set them apart. These differences can be deciphered through the comparison of a soliloquy vs. a monologue.

Differences Between Soliloquy and Monologue

A monologue is aimed at one or all the characters present in the scene, while a soliloquy is not meant to be listened to by any other character from the story.

Through a monologue, a character can establish his say over other characters, or present a different point of view. On the other hand, a soliloquy can be used to reveal the innermost thoughts or feelings of a character, along with the various layers of the character’s personality.

Given that in both forms, the character delivering the chunk of dialogs carries on uninterrupted, yet, monologues can be termed as a one-sided conversations. There is no conversation of any kind taking place in a soliloquy.

Yet here’s a spot,
A stain on my conscience as much as on yours,
Just as his blood did stain the sheets.
His blood, his blood,
What have we done, you and I?

Ambition is a cruel mistress,
Riding and clawing her way to the top,
Laying roots that burrow down into the soul,
To squeeze, to squeeze
What relief can be found but in doing her bidding?
But in carrying her with us through each morbid step?

When he arrived, proud majesty on a dignified roan,
Did he know his fate?
Did his fatherly brown eyes peer into my cold ones,
Orbs to the soul,
To see Ambition’s serpent hidden
In the flowering innocence of womanhood?

And yet, my love, you were the stronger one.
Ambition is embedded deeper in you then she ever was in me,
For when I lay the daggers by his bed,
I looked,
And could not do.

But you came back, the job was not yet done.
Ambition grabbed the reigns and
I obeyed,
Saw the blood on the sheets
Dripping from his slack skin to pool under his eyes
Dead, dead.
I scooped it up, like a haggard beggar women who,
Seeing a glinting gold piece, hugs it close.

A hand slathered it on the sleeping servants
Washing them in the holy water of Ambition,
And when ’twas done,
I knew not who had done it, me or her.

There would have been a time for such a word.
Tomorrow, and tomorrow, and tomorrow,
Creeps in this petty pace from day to day
To the last syllable of recorded time,
And all our yesterdays have lighted fools
The way to dusty death. Out, out, brief candle!
Life’s but a walking shadow, a poor player
That struts and frets his hour upon the stage
And then is heard no more: it is a tale
Told by an idiot, full of sound and fury,
Signifying nothing.

But soft, what light through yonder window breaks?
It is the east and Juliet is the sun!
Arise, fair sun, and kill the envious moon,
Who is already sick and pale with grief
That thou her maid art far more fair than she.
Be not her maid, since she is envious;
Her vestal livery is but sick and green,
And none but fools do wear it. Cast it off.
It is my lady, O, it is my love!
O that she knew she were!
She speaks, yet she says nothing; what of that?
Her eye discourses, I will answer it.
I am too bold: ’tis not to me she speaks.
Two of the fairest stars in all the heaven,
Having some business, do entreat her eyes
To twinkle in their spheres till they return.
What if her eyes were there, they in her head?
The brightness of her cheek would shame those stars,
As daylight doth a lamp. Her eyes in heaven
Would through the airy region stream so bright
That birds would sing and think it were not night.
See how she leans her cheek upon her hand
O that I were a glove upon that hand,
That I might touch that cheek!

O, she doth teach the torches to burn bright!
It seems she hangs upon the cheek of night
Like a rich jewel in an Ethiop’s ear;
Beauty too rich for use, for earth too dear!
So shows a snowy dove trooping with crows,
As yonder lady o’er her fellows shows.
The measure done, I’ll watch her place of stand,
And, touching hers, make blessed my rude hand.
Did my heart love till now? forswear it, sight!
For I ne’er saw true beauty till this night.

A monologue can be more helpful in making the sequence more dramatic. A soliloquy is a type of monologue, through which the character can work out his thoughts for the benefit of the off-stage audience. Also, there are many examples of monologues around, such as someone talking at length or giving a speech. On the other hand, it would be difficult to witness a soliloquy in real life; finding someone talking aloud to himself would be pretty strange and awkward.