Difference between Preterite and Imperfect (Spanish Past Tenses)

The usage of preterite and imperfect tenses in Spanish is replete with a bounty of confusion. The Spanish preterite vs. imperfect comparison is demonstrated in the Penlighten article below.

Home / Uncategorized / Difference between Preterite and Imperfect (Spanish Past Tenses) 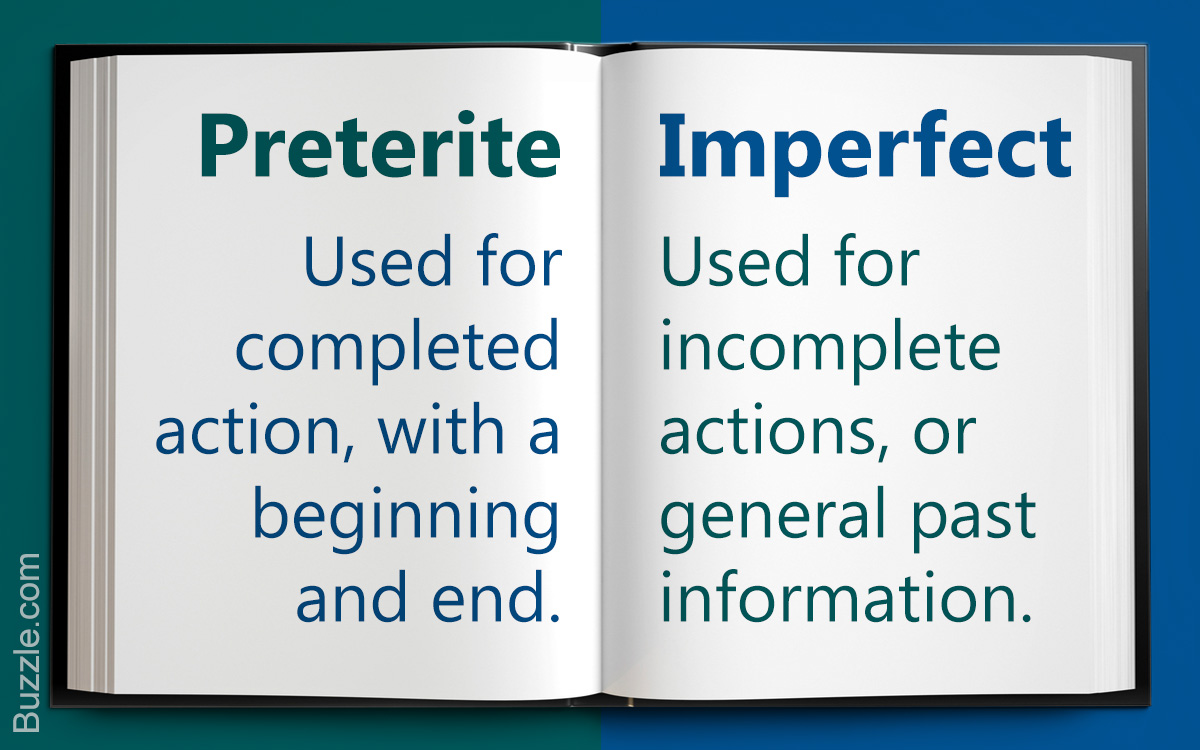 The usage of preterite and imperfect tenses in Spanish is replete with a bounty of confusion. The Spanish preterite vs. imperfect comparison is demonstrated in the Penlighten article below.

Spanish is one of the very few languages in the world having a complicated, yet interesting set of grammar rules. Did you know that there are 21 tenses in Spanish? Yes, you heard it right, it is 21. The tenses in this language vary according to the way the verb in question is conjugated. There are certain syntax rules regarding the endings of the conjugated verbs. Accordingly, every verb has its own conjugation. Speaking of the past tense, it has two forms in Spanish – preterite and imperfect, which are used differently depending on the situation. There has always been an excessive confusion among Spanish learners with regard to when to use preterite and imperfect. The paragraphs below attempt to clear your dilemma regarding the same.

Preterite and imperfect endings are different, and they are both outlined below.

In the above sentence, the verb used is ‘llamar’ (to call). And the action in this sentence is done a specific number of times. Since the action is done by you, i.e., ‘I’ in first person, the ending used is ‘é’. The ‘lo’ here is the object pronoun.

In this sentence, the action of buying the shoes is complete, and has occurred at a specific, definite time. The action is done by a third person, therefore, the ending ‘ó’ used for third person, singular form, is used for the verb ‘comprar’ (to buy).

Observe this sentence carefully. There are multiple verbs here. The preterite is also used to describe a chain of events that occur in sequence. The verb ‘despertar’ (to wake up) is actually reflexive. And, since we are using third person plural, we use the ending ‘aron’ for this verb. The time is also specific (in the morning). The completion of reports and leaving for office are also completed actions. Again, the action is done in third person plural. And, the verb ‘ir’ is used to indicate leaving for the office. That is why the conjugations ‘completaron’ and ‘fueron’ are used.

The imperfect tense is used for describing people, places, or things. In the above example, the verb is ‘tener’ (to have). We are talking about Esther, who is a third person singular, hence the ending ‘ía’ has been used.

The imperfect tense is used to describe habits. Eating, sleeping, bathing, etc., are some actions which are described using the imperfect tense. In the above case, the verb is actually not ‘go’ or ‘fish’. It is ‘used to’, which has a special usage in Spanish. That is to say, any habitual trait is described using ‘used to’. The verb is ‘soler’. And since the action is done by first person plural, the ending is ‘íamos’. And after one conjugation, if another verb is in line, it is never conjugated. As in the above example, only ‘soler’ is conjugated, not ‘ir’.

★ Ellos estaban preocupados por Emily. (They were worried about Emily.)

Any kind of feelings or mental behavior is also expressed using the imperfect.

How about checking if you have understood the difference between preterite and imperfect? If you feel confident, take the simple quiz given below. Here, you will be given the verb and the subject. Judging the situation, you have to decide whether you need to use the imperfect form or the preterite form. Use the charts above, form the conjugation, and use it in the sentence. After writing down your answers, you can verify them as well. But do try to do it yourself first. Mind you, no cheating!

★ Yo (caminar) por el parque cada domingo. (I walked through the park every Sunday.)

★ (Yo escribir) la carta ayer. (I wrote the letter yesterday.)

★ No (haber) nada en la refrigeradora. (There was nothing in the refrigerator.)

Spanish grammar is so vast, it can send you into a labyrinth. But I assure you, there is no Minotaur lying in wait. All you will find is a treasure trove of knowledge. The above article was just a trailer; to be fluent in the language, you need to master the basics. There is no limit to learning, is there? So, just go ahead and learn more and more! And, if you have found the above article interesting, you might find Spanish pronouns and adjectives worth exploring as well.