Famous Examples of Allegory in Literature and How to Analyze Them

Allegory is a writing technique that can work wonders and create layers of deep meaning in a piece of literary work. We introduce you to some of the best works in literature that have used this figure of speech in the most effective manner. 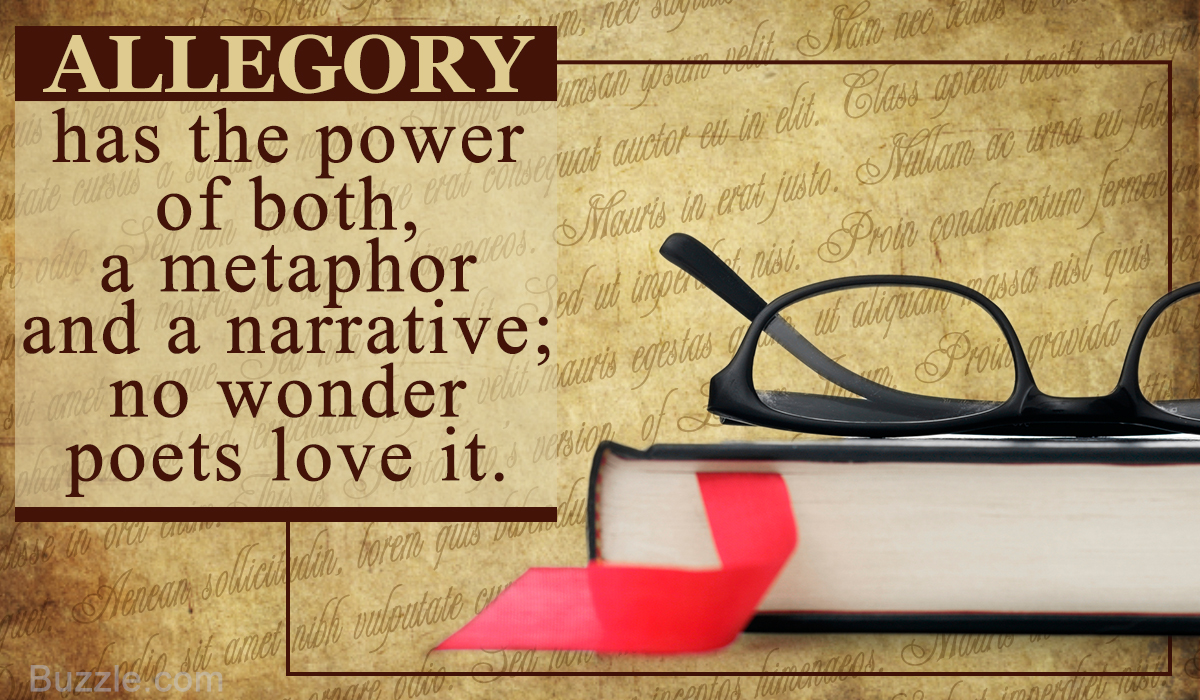 Allegory is a writing technique that can work wonders and create layers of deep meaning in a piece of literary work. We introduce you to some of the best works in literature that have used this figure of speech in the most effective manner.

Most of us have grown up reading stories and fables with underlying morals that sought to teach us something that was not explicitly mentioned in the tale told. That is, in extremely simplistic terms, the use of allegory. So, what is an allegory? If you are familiar with the term metaphor, then understanding allegory should not be difficult for you. It is one of the literary devices that uses objects, characters, and even actions to represent an underlying meaning that is different from what the object or character literally translates into. Allegorical representations are found in most mediums of expression, and therefore, language or literature is not the only way to express something that is not visibly clear to the eye.

Why Authors Use Allegory

The word allegory comes from the Latin term allegoria which translates to mean veiled language. Most often, authors who use allegory do so in the form of an exaggerated metaphor. In English language, the word allegory was first used in the year 1382. This definitely does not mean that there were no examples of allegory in literature prior to the fourteenth century, but there was no specific term for the figure of speech.

Authors using allegory often do the same to add layers to their works. This allows them to create characters that are not only well-rounded and multidimensional but also characters that stand for something that is larger than what they literally translate into. It is also often a way for readers to understand the author’s views and beliefs. It gives us an insight into not only how the author views the world but how he wishes for the world to be.

According to some, the earliest example of an allegorical story can be traced to the New Testament. Since then several other books have been written in this technique. We look at some of the best examples.

It is probably the first allegorical work that most people read. Credited to Aesop who lived in ancient Greece, it is a collection of short stories, like The Fox and the Grapes, The Tortoise and the Hare, and The Ant and the Grasshopper, that became a source of moral messages. Aesop used animals and their actions to allegorically represent human beings and our way of living.

The Republic by Plato may not be one of the most accurate examples of the literary technique since it is a philosophical work, but it is one of the most quoted examples. The Allegory of the Cave is a representation of how man accepts conventions and refuses to question them. Plato conveys this message by using a group of prisoners trapped in a cave.

This epic poem by Dante published in the fourteenth century is one of the best allegorical works that depicts Dante’s journey through Hell, Heaven, and Purgatory to represent the journey of one’s soul to God.

Published in 1499, there is still dispute about who should be attributed with this work. It is largely believed to be written by Francesco Colonna and is the story of Poliphilo who is searching for his lover Polia. The entire book is written in an allegorical style and is full of yet unsolved mysteries.

This famous work by William Shakespeare may not be the best known example of allegory but there are many examples of allegory in Romeo and Juliet. This is especially true for the constant comparison of Romeo’s love for Juliet to a religious and spiritual experience. A reader can notice this in lines like, “Call me but love and I’ll be new baptized.”

This incomplete epic poem by Edmund Spenser is one of the most quoted allegorical examples. It is one of the longest poems in English literature and was written completely in allegory in praise of Queen Elizabeth I.

This famous literary work about a man and his travels by Jonathan Swift is probably more famous as a satire. But if you read the book more carefully and with a keen eye, you are sure to spot several allegorical examples in the work.

George Orwell’s Animal Farm is probably one of the best known examples of this literary technique in which a farm governed by animals stands to represent the communist regime of Stalin in Russia before the Second World War.

Lord of the Flies

William Golding could not have better represented his idea of human nature and a need to put self above the rest than the way he did with this acclaimed novel. Featuring a group of schoolboys stuck on an island, this novel had allegorical representations of the rational mind, democracy, order and civility, and many other such abstract terms.

This book by John Bunyan is probably the most famous piece of allegorical work in literature. The author, who was a preacher, used the book to represent people and concepts, and to spread the word about Protestantism. His characters were named Ignorance, Talkative, Pliable, Prudence, Discretion, etc., and were used to explain in all clarity specific points.

Nobel Prize winner and Egyptian writer Naguib Mahfouz once said, “An allegory is not meant to be taken literally. There is a great lack of comprehension on the part of some readers.” When you are studying allegorical works, this is the best piece of advice to keep in mind. It is a figure of speech to convey a deeper meaning and as readers it is up to us to understand and assimilate the underlying context in any piece of literary work.