Examples of Figurative Language in ‘The Raven’ By Edgar Allan Poe

The Raven was a noir poetry that changed the conventional ideas, left the readers spellbound, and attained instant popularity. Here are some examples of figurative language used by Edgar Allan Poe in this poem. 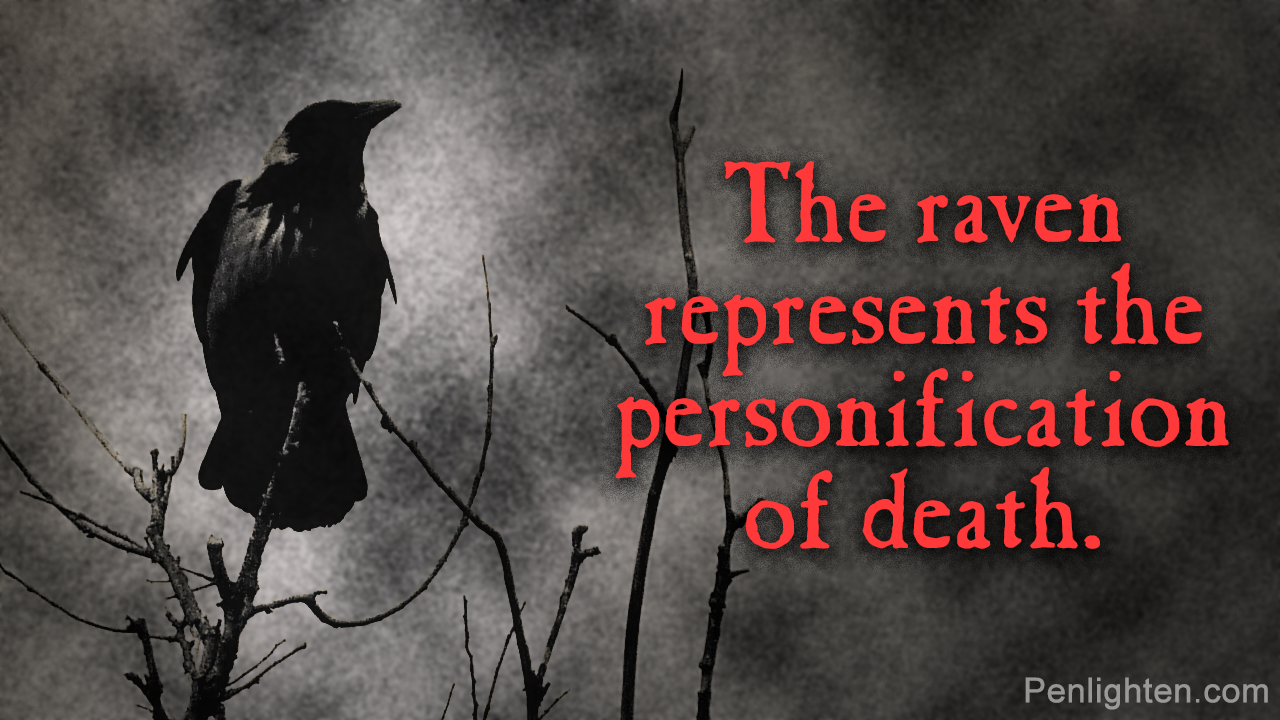 The Raven was a noir poetry that changed the conventional ideas, left the readers spellbound, and attained instant popularity. Here are some examples of figurative language used by Edgar Allan Poe in this poem.

‘The Raven’ celebrated 170 years of illustrious personification on January 29, 2015. It was first published in the “New York Evening Mirror” on January 29, 1845.

“The Raven” is set in a “melancholic tone”, and its central theme revolves around the eternal question about death. The bird raven itself is a personification of death, it’s related in the biblical as well as mythological sense with ill-omen and dark mysticism. It speaks just one word throughout the poem “nevermore”. The catchy phrase “nevermore” became an instant street lingo after the poem was published. This popular allusion became frequently used in theatrical plays much to the delight of the audience as well as Poe.

According to Poe, the whole theme, the primary character, and the plot of the poem were all made on guise or alibi for setting up the “nevermore” chorus, to be echoed with a variation of significance and impact each time. Discussed below are some more interesting figurative language examples that enhance the melancholic beauty of this poem.

In the poem, the raven is personified as a messenger of death

Personification is “a figure of speech in which abstract entities, animals, ideas, and nonliving objects are empowered with human form, character, traits, or sensibilities.”

In this poem, the raven is royally personified, almost like a noble guest who has entered into the presence of the sad young victim, perhaps as a messenger of dead or harbinger of death. The narrator is captivated by its entrance into the room and terms it “stately”, and the way it perches itself looks like an act of dignified nobility “mien of lord or lady.” In fact, the raven is just a bird and it flies into the room; it knows nothing of pretending itself to be like royalty. The narrator goes on to tell how the raven spoke – not with a bird-like caw but human-like one word, with great lucidity and emotion, “as if his soul in that one word he did outpour.” All these descriptions of the raven’s manner of speaking, activeness, and emotion―all of these are examples of personification.

“In there stepped a stately Raven of the saintly days of yore;
Not the least obeisance made he; not a minute stopped or stayed he;
But, with mien of lord or lady, perched above my chamber door – “
“But the Raven, sitting lonely on the placid bust, spoke only
That one word, as if his soul in that one word he did outpour.”

The haunting effecting of the poem is rendered through the auditory sensations and visual movements like that of a something ghosted directs itself towards the appearance of the eerie raven. Repeatedly, Poe has given inanimate objects or qualities assuming the dimensions or powers of living animate beings in order to enhance the ominous and indicative tone of the poem.

“And each separate dying ember wrought its ghost upon the floor.”
The embers of the fire assume the properties of a ghost.

“And the silken sad uncertain rustling of each purple curtain”
A human quality of being uncertain is attributed to the curtains.

“An echo murmured back the word, “Lenore!”
A sinister form of exaggeration, a human voice seems to be murmuring back without any human presence.

“Then this ebony bird beguiling my sad fancy into smiling,”
An inanimate object is given the human ability of smiling.

Simile is “a figure of speech in which comparison of one thing is done with another thing of a different kind, to make the description more emphatic or vivid.”

The narrator compares the tapping sound (of the raven) with that of a human tapping, it’s not actually the sound of tapping, but he feels as if he heard a knock on the door.

The poet uses imagery through the image of the black bird, the raven.

Imagery is “a figure of speech of visual symbolism.”

Poe uses imagery through the image of the raven. Its presence and the one symbolic word, which appears umpteen times throughout the poem, symbolizes death, questions of the supernatural, and the afterlife, not only literally but also figuratively. The mysterious word “nevermore” builds suspense, because its meaning can be interpreted as altering each time the word is expressed towards a dramatic climax. It is equivocal as to whether the bird is literally saying “nevermore” or if the word is simply reflecting again and again in the anguished mind of the narrator. It’s also a figurative imagination of ‘Lenore’, whom the narrator is grieving about and contemplating on ending his life in the presence of the raven who appears to be like a grim reaper of his soul. The word refers to ‘Lenore’ but also projects doom for the narrator.

Metaphor is “a figure of speech in which a word or phrase is applied to an object or action to which it is not literally applicable.”

Throughout history, birds connote the flight of souls, and they are said to have mystical powers to act as the mediators between heaven and earth. This metaphor is used numerous times throughout the poem to personify the raven, making it look like a soul reaper. When the raven first appears, the narrator says he sat “with mien of lord or lady,” which grabs the attention of the reader, and they feel that there is something unique about this bird. Once the raven starts tormenting the narrator with his repeated choruses of “nevermore,” the narrator compares it to a seer or the demon. Later, the narrator parallels the raven’s “fiery eyes now burned into my bosom’s core”, comparing its eyes to burning flames that scare his bosom, it could also denote the flames of hell directed towards the narrator as he is contemplating suicide. The metaphor used in the poem makes the bird supernatural when the narrator refers it as “And his eyes have all the seeming of a demon’s that is dreaming,”, he compares it to a demonic entity waiting for his soul.

Allusion is “a figure of speech in which an indirect or passing reference is made to any object of existence.”

Various allusions in the poem nod towards mythology and biblical references. “Perched upon a bust of Pallas.” “Pallas” is “Pallas Athena,” the Greek goddess of wisdom. The fact that the raven prefers to sit upon her head can be interpreted as the narrator attributes this to the idolatry of Lenore, his beloved, or he attributes both Lenore and the Goddess as wise.

Another mythological allusion in which the narrator demands of the ominous bird to “Tell me what thy lordly name is on the Night’s Plutonian shore!” Pluto is the Greek god the Underworld. The underworld is a dark dismal place, which is the present state of mind of the narrator as he languishes between life and death. The word “shore” may also be an allusion to the River Styx, which subsisted between the Earth and the Underworld. The river was navigated by Charon, the ferryman who channeled deceased souls from the earthly shore to the Underworld. This too conveys the narrator’s internal torment.

The biblical allusion is the reference to “perfumed from an unseen censer/Swung by Seraphim whose foot-falls tinkled on the tufted floor.” In the Bible, these creatures are six-footed and winged. They surround the God’s throne, repeating just one word: “Holy, holy, holy!” In this way, they have something in mutual with the winged raven, who choruses “nevermore.”

In another biblical allusion, the narrator cries out, saying, “is there no balm in Gilead?” this verse is taken from Jeremiah 8:22: “Is there no balm in Gilead; is there no physician there?” The “balm of Gilead” is mentioned several times in the Bible, it is made from the gum of a bush that grows plentifully in Gilead (an area East of the Jordan River) and is used medicinally to heal cuts and wounds. The narrator wants it as a spiritual comfort for his aching soul.

The poem’s unusual authority lies in its four key elements―its obligating narrative structure, darkly reminiscent atmosphere, hypnotic verbal rhythm, and archetypal symbolism. Even if the protagonist does not fully succeed or try to escape the heroic demands of tragedy by struggling against his fate. He firmly faces his tormentor, a demonic allegory of “Mournful and Never ending Remembrance.” If you wish to get inspired more by this noir poetry, then summary and analysis of Edgar Allan Poe’s ‘The Raven’ is worth a read!