What are the Characteristics of Petrarchan Sonnets?

Petrarchan sonnet is one of three main types of sonnets. It was introduced in Italy and later adopted in English literature. Penlighten enlists some of its main features, in this post.

Home / Uncategorized / What are the Characteristics of Petrarchan Sonnets? 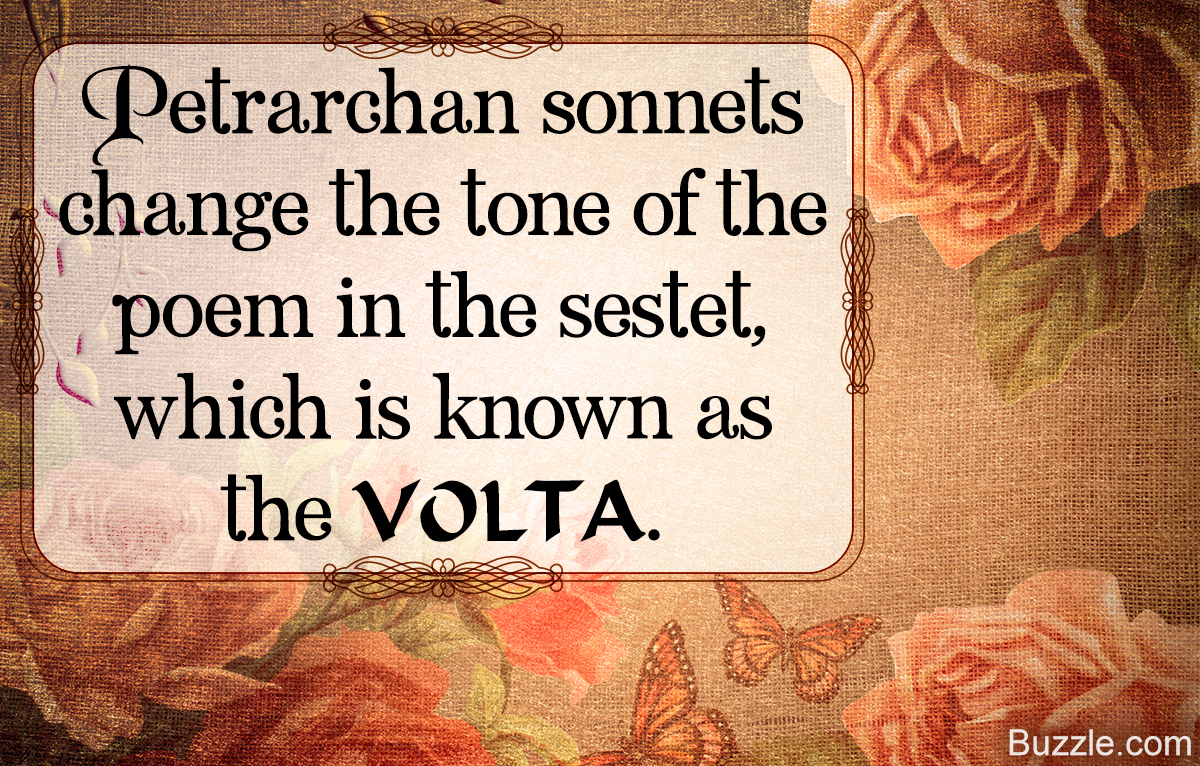 Petrarchan sonnet is one of three main types of sonnets. It was introduced in Italy and later adopted in English literature. Penlighten enlists some of its main features, in this post.

Thomas Wyatt first introduced Petrarchan sonnets in England at the wake of the 16th century.

The Petrarchan sonnet was the brainchild creation of Francesco Petrarchan. He is renowned as the Father of Humanism, and also the first to use the term ‘Dark Ages’, which denoted Medieval Europe. He was one of the most acclaimed poets of the Renaissance Period, and one of the key contributors of the modern Italian language. He was an ardent fan of ancient literature. The typical structure of a Petrarchan sonnet is ABBA ABBA (octave) CDECDE or CDCDCD (sestet). In the subsequent sections of this article, we shall refer to some of the famous poems which serve well as Petrarchan sonnet examples.

✦ In a Petrarchan sonnet, the octave comprises two quatrains, each comprising four lines. The remaining six lines, which form a sestet, have specific rhyme schemes.

✦ The tone differs in a Petrarchan sonnet between the octave and the sestet. This change is known as volta. This is also known as the turn of the poem. The volta is supposed to indicate the shift in the tone of the poem. It can be spotted by the presence of words such as Yet, But, and And yet.

✦ The volta is noticed at line 9 of the poem. Usually, the volta solves the problem that was mentioned by the poet in the octave. It could also narrate about a state of affairs that was introduced in the octave. It serves as the climax in a sonnet.

✦ The subjects of Petrarchan sonnets were mostly about love and scorn. The writing style was detailed description of all the details about the subject.

✦ This type of sonnet also made comparisons of the character with the help of metaphors and similes.

This is a translated work of one of the Petrarchan sonnets. The translation was done by Thomas Wentworth Higginson. The poem demonstrates an ABBA-ABBA-CDE-CDE scheme. The volta can be seen in the last line of the octave, starting with the word ‘yet’.

A- She ruled in beauty o’er this heart of mine,
B- A noble lady in a humble home,
B- And now her time for heavenly bliss has come,
A-‘Tis I am mortal proved, and she divine.
A-The soul that all its blessings must resign,
B-And love whose light no more on earth finds room,
B-Might rend the rocks with pity for their doom,
A-Yet none their sorrows can in words enshrine;
C- They weep within my heart; and ears are deaf
D- Save mine alone, and I am crushed with care,
E- And naught remains to me save mournful breath.
C- Assuredly but dust and shade we are,
D- Assuredly desire is blind and brief,
E- Assuredly its hope but ends in death.

The waving hair of unmixed gold that shone,
The smile that flashed with the angelic rays
That used to make this earth a paradise,
And now a little dust, all feeling gone;

And yet I live, grief and disdain to me,
Left where the light I cherished never shows,
In fragile bark on the tempestuous sea

Here let my loving song come to a close;
The vein of my accustomed art is dry
And this. my lyre, tuned at last to tears.

✦ The rhyme scheme is the same as other Petrarchan sonnets, and the volta is in the sixth line. The above is the poem written by Petrarchan, which is a classic example to show the love that he had for his beloved Laura. It is one of the poems which appears in Canzoniere, which is a collection of 366 poems.

✦ This poem addressed unfulfilled love. The irony, however, is that he could never confess his love for the lady, and could thus never get the love from her.

✦ The poet continued loving the woman, without in fact expressing it, till she died.

✦ The poet has expressed outright regret at the death of the woman, and depicts her as a Goddess, in his poem.

✦ The poet talks about the perfection Laura possessed, and by virtue of which the poet made his own world a perfect place for himself.

✦ On the whole, this sonnet is all about the poet’s feelings which he had for Laura. This was a sonnet of the love, beauty, and death of Laura.

The key differences between a Petrarchan sonnet and a Shakespearean sonnet is the scheme of the lines. The latter never followed the stanza pattern. It was written as a quatrain, instead of the octave and sestet way. The lines ended as a couplet.