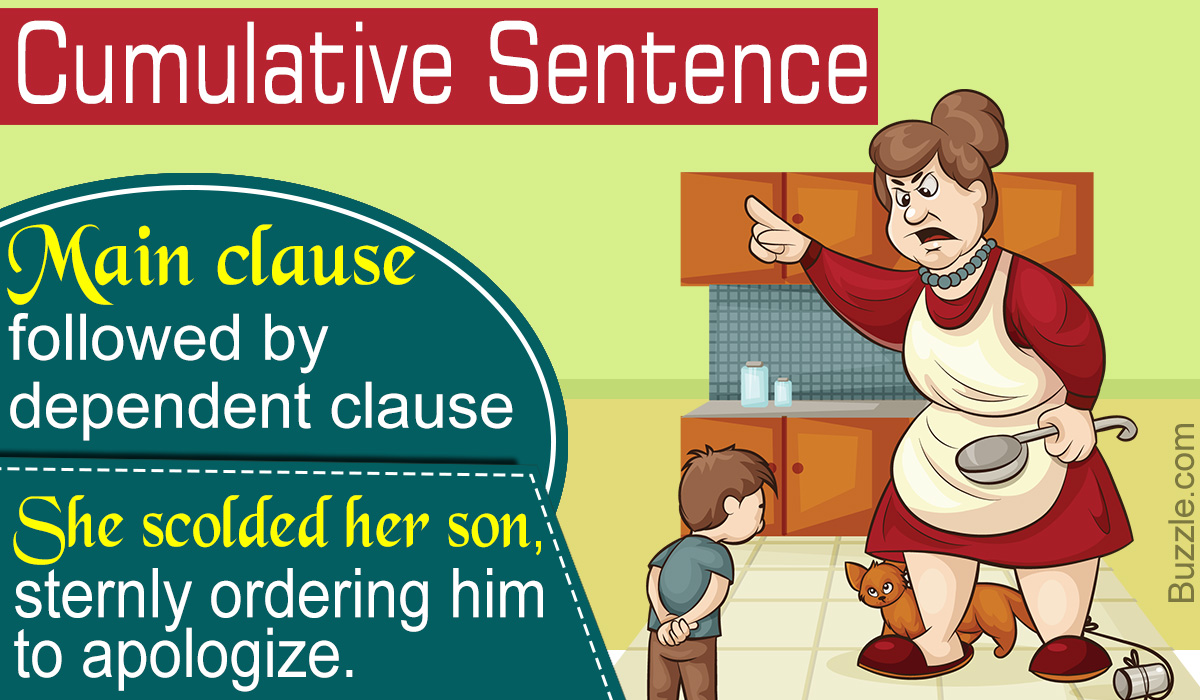 Cumulative sentences work well for explaining theories, as the main idea is given first, and additional information is given to build up on the idea.

Periodic sentences keep the reader in suspense by beginning with the additional details and providing the central idea at the end.

A loose or cumulative sentence is a type of sentence structure that is used when there is a need to show degrees of significance in the constituent ideas. Loose structure and periodic structure are two variations that can be differentiated on the basis of the position of the main clause and the subordinate clause. Simply put, a loose sentence starts with a main clause, followed by a subordinate clause. According to The New Oxford Guide to Writing, the loose sentence approaches the cumulative style, when the number of subordinate constructions increase. So, a cumulative sentence is defined as a sentence in which the main clause comes first, followed by subordinate modifiers or trailing elements. These are often used in cases when one wants to put forth the main idea first, and provide details in order to explain the idea further. These details could be in the form of one or more subordinate or dependent clauses or phrases.

A periodic sentence is another type of sentence structure where the writer withholds the main idea till the very end. In such sentences, the subordinate clause comes first. We tend to use loose sentences more than periodic sentences while conversing or writing.

What Effect Does a Cumulative Sentence Have?

Here’s an example to explain the difference between cumulative and periodic sentences:

✤ Stella was elated, when she held her baby for the first time.

✤ Holding her baby for the first time, Stella was elated.

In the first sentence, the central idea (Stella is happy) appears first, followed by the additional information. In the second one, the main idea is delayed by providing the dependent clause first. The independent/main clause that comes in the beginning of the loose/cumulative sentence is a standalone sentence, whereas the periodic sentence begins with a dependent clause that will convey the complete thought, only after one reads the main clause at the end.

It must be noted that a subordinate clause is not a standalone sentence, and the main thought of the sentence would not be understood till one reads the main clause that appears in the end. Thus, periodic sentences are more complex, formal, or literary in nature than cumulative sentences.

Care has to be taken while structuring loose and periodic sentences. One has to be judicious when it comes to explaining the main clause through modifying subordinate clauses or phrases. At times, the reader might not want to read the entire sentence, as he/she feels that he’s already aware of the main idea. If the sentence is too long, the reader might forget the main idea or lose interest by the time he/she comes to the end of the sentence. This also applies to periodic sentences. Though periodic sentences are complex and dramatic, they shouldn’t be used too often. Some readers might feel impatient, when the central thought is delayed due to the long string of details.

In the following examples, the central idea that is presented by the main/independent clause has been highlighted:

✤ Thomas started crying bitterly, after the teacher punished him, with tears rolling down his cheeks.

✤ They all watched the game in silence, when their best player retired hurt, wondering how that would affect the outcome of the game.

✤ She was thoroughly enjoying her music class, as her teacher appreciated her voice quality, persuading her to take up singing as a career.

✤ Jacob opened his eyes, still shaking from fear, realizing that it was a terrible nightmare.

✤ The manager called the employee, scolding him for not coming on time, threatening him of dire consequences.

✤ She walked the red carpet, looking so gorgeous, with all eyes on her.

✤ She came to work, even though she was feeling weak and feverish.

✤ They all looked disoriented, woken up from the slumber, with the loud sound of the bell.

✤ Susan was inexorable, even though her friends persuaded her to stay calm.

✤ She went to the mall, looked for appropriate gifts for her friends, and reached home in a couple of hours.

✤ He finally bought his dream house, though it cost him a lot, both in terms of time and money.

✤ They spotted a huge lion, sleeping like a baby, along with cubs, under a large tree.

✤ They rarely fight, surely a match made in heaven.

✤ The dog started barking loudly, when a stranger approached the gate.

✤ She felt uneasy when she looked at the number of candidates who had applied for the job.

✤ He approached the beautiful woman, mustering up courage, even though he hesitated initially.

✤ Due to studying day and night and giving up on all recreational activities, she managed to get high grades.

✤ As all her time went in looking after her old parents, she never had enough time to pursue her dreams.

✤ Even though she worked hard, finished her projects before time, her work was never appreciated.

✤ As soon as they entered their home, they realized that they had been robbed.

✤ Though they are very rich, they are always unhappy.

✤ After her popularity began to wane, she felt lonely and miserable.

✤ When everyone else was calling her names, he tried to stop them.

✤ If she had listened to him, her life would have been completely different.

✤ Though she was unwell, she took care of her guests.

✤ After listening to her woes, Shaun decided to help her.

Examples of Cumulative Sentences in Literature

✤ She came among them behind the man, gaunt in a gray shapeless garment and the sunbonnet, wearing stained canvas gymnasium shoes.
― William Faulkner

✤ The women moved through the street as winged messengers, twirling around each other in slow motion, peeking inside homes and watching the easy sleep of men and women.
― Terry Tempest Williams

✤He could sail for hours, searching the blanched grass below him with his telescopic eyes, gaining height against the wind, descending in mile-long, gently declining swoops when he curved and rode back, never beating a wing.
― Walter Van Tilburg Clark

✤ I write this at a wide desk in a pine shed as I always do these recent years, in this life I pray will last, while the summer sun closes the sky to Orion and to all the other winter stars over my roof.
― Annie Dillard, An American Childhood

✤ Here was this man Tom Guthrie in Holt standing at the back window in the kitchen of his house smoking cigarettes and looking out over the back lot where the sun was just coming up.
― Kent Haruf, Plainsong

✤ It is a wilderness that is beautiful, dangerous, abundant, oblivious of us, mysterious, never to be conquered or controlled or second-guessed, or known more than a little.
― Wendell Berry

✤ He was an eerie sight, a bundle of rags standing at the end of the stairs, his shadow on the wall looming over him.
― Walter Dean Myers, The Treasure of Lemon Brown

✤ It is a melancholy object to those, who walk through this great town, or travel in the country, when they see the streets, the roads and cabin-doors crowded with beggars of the female sex, followed by three, four or six children, all in rags, and importuning every passenger for an alms.
― Alexandre Dumas, The Three Musketeers

✤ Joel sat scrunched in a corner of the seat, elbow propped on the window frame, chin cupped in hand, trying hard to keep awake.
― Truman Capote, Other Voices, Other Rooms

✤ John Laroche is a tall guy, skinny as a stick, pale-eyed, slouch-shouldered, and sharply handsome, in spite of the fact that he was missing all his front teeth.
―Susan Orlean, The Orchid Thief

The aforementioned examples clearly indicate the straightforward nature of loose sentences. There is a reason why these sentences are used more often. They are simple, straightforward, and easier to understand. In cumulative sentences, the additional details may become quite important, as they clarify the main idea that is given briefly at the beginning of the sentence. However, periodic sentences can be quite emphatic. At times, delaying the central thought can increase its significance. Thus, you can use these sentences, when you need to keep the reader in suspense.