Alluring Examples of Sestets in Poetry

A sestet is a part of poetry that consists of six lines. It is a component of an Italian sonnet containing an octave (8 lines) that is followed by a sestet. 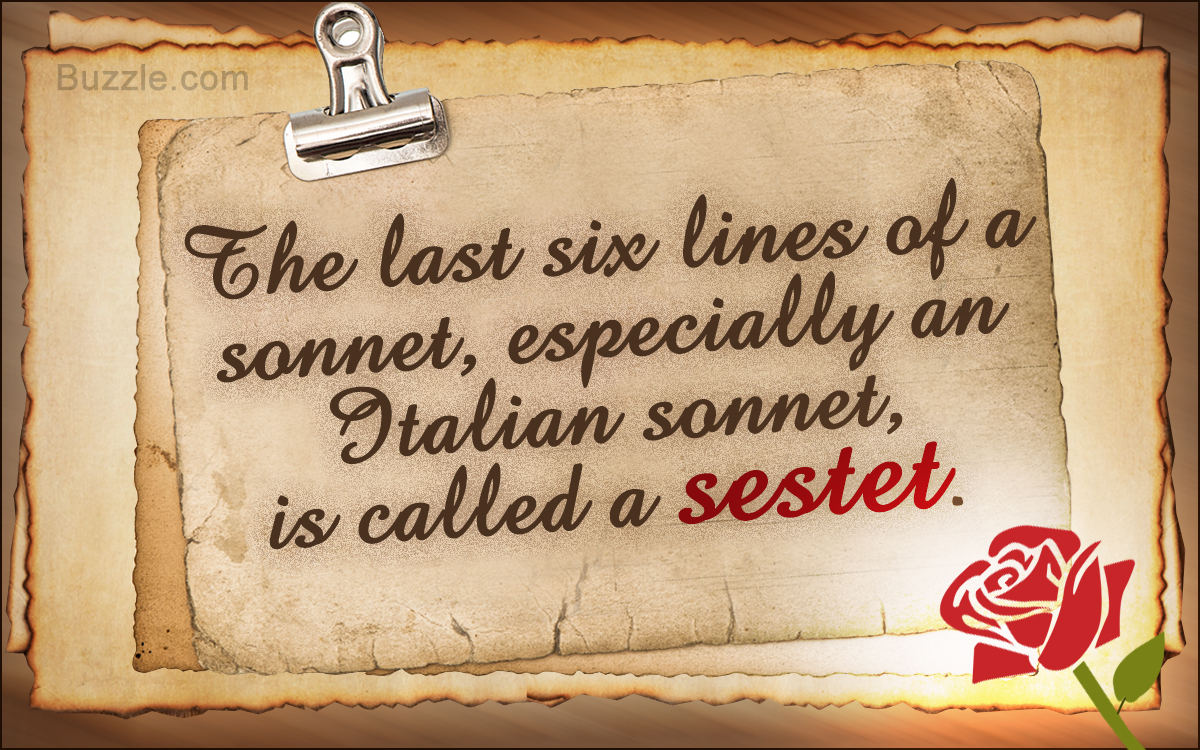 A sestet is a part of poetry that consists of six lines. It is a component of an Italian sonnet containing an octave (8 lines) that is followed by a sestet.

Rita Dove says, “Poetry is language at its most distilled, and most powerful.” And rightly so, poetry is one of the most powerful forms of literature. The flow of the language, the beauty of the poet’s emotions placed so gracefully in words, the way he delicately looks at his muse, and the words he uses to admire it, always make a lasting impression on you.

However, there is a lot more to poetry than the beautiful language. Poetry, often defined as a form of literature that uses rhythmic qualities of language, is classified into numerous types on the basis of its form and genre. Depending on the genre, poetry is classified into elegy, epic, narrative, dramatic, satirical, lyrical, verse fable, speculative, and prose poetry. On the other hand, it is classified into ode, sonnet, shi, villanelle, tanka, ghazal, and haiku depending on the rhyme scheme, meter, and other rules followed while writing on the poem.

What is a Sonnet?

A sonnet is one of the most common forms of poetry. It is a poem that consists of fourteen lines. It was first invented by Giacomo Da Lentini, in Italy, around the 13th century. The term is derived from the Italian word sonetto, which means a little song or sound. Sonnets are also sometimes referred to as “sonneteers”.

The various types include Italian sonnets, Occitan sonnets, Shakespearean sonnets, Spenserian, and Urdu sonnets. The earliest sonnets were written by Guittone d’Arezzo, Dante Alighieri, Guido Cavalcanti, and Michelangelo. The most famous ones were, however, written by Petrarca (Petrarch in English), an Italian scholar and poet in Renaissance Italy.

In the 13th century, a sonnet was typically a poem of fourteen lines, which followed a set rhyme scheme. However, this changed in the 14th century, when Petrarch introduced a new form of sonnet. A Petrarchan sonnet is usually divided into two parts: (i) an octave, which consists of eight lines, and (ii) a sestet, which consists of six lines. The first eight lines of the sonnet are collectively called octave. The octave present the situation or the inside story of the speaker in the sonnet. Typically, the rhyme scheme of an octave is a b b a a b b a.

The sestet, on the other hand, is more flexible. It usually uses a rhyme scheme of c d d c d d, c d d e c e, or c d d c c d. The beginning of a sestet is called a volta. The sestet introduces a significant change in the tone of the sonnet, which is marked by the change in its rhyme scheme. Its function is to comment on, or provide a solution to the aforementioned problem in the octave. A sestet never ends with a couplet in a strict Petrarchan sonnet, as it further divides it into a quartet and a couplet. However, this rule is not necessarily observed in the Italian sonnet in English, which often uses c d d c e e and c d c d e e.

Example of a Petrarchan Sonnet

A In what bright realm, what sphere of radiant thought
B Did Nature find the model whence she drew
B That delicate dazzling image where we view
A Here on this earth what she in heaven wrought
A What fountain-haunting nymph, what dryad, sought
B In groves, such golden tresses ever threw
B Upon the gust? What heart such virtues knew?
A Though her chief virtue with my death is frought.

C He looks in vain for heavenly beauty, he
D Who never looked upon her perfect eyes,
C The vivid blue orbs turning brilliantly
D He does not know how Love yields and denies;
C He only knows, who knows how sweetly she
D Can talk and laugh, the sweetness of her sighs.

From ‘On His Blindness’ by John Milton

That murmur, soon replies, “God doth not need
Either man’s work or his own gifts; who best
Bear his mild yoke, they serve him best. His state
Is Kingly. Thousands at his bidding speed
And post o’er land and ocean without rest;
They also serve who only stand and wait.”

From ‘The Better Part’ by Matthew Arnold

So answerest thou; but why not rather say:
“Hath man no second life? – Pitch this one high!
Sits there no judge in Heaven, our sin to see? –
More strictly, then, the inward judge obey!
Was Christ a man like us? Ah! Let us try
If we then, too, can be such men as he!”

From ‘How do I love thee’ by Elizabeth Barrett Browning

Ourselves, no prison is: and hence for me,
In sundry moods, ’twas pastime to be bound
Within the Sonnet’s scanty plot of ground;
Pleased if some Souls (for such there needs must be)
Who have felt the weight of too much liberty,
Should find brief solace there, as I have found.

And when I feel, fair creature of an hour!
That I shall never look upon thee more,
Never have relish in the faery power
Of unreflecting love!-then on the shore
Of the wide world I stand alone, and think
Till Love and Fame to nothingness do sink.

From ‘The Unreturning’ by Wilfred Owen

Then peered the indefinite unshapen dawn
With vacant gloaming, sad as half-lit minds,
The weak-limned hour when sick men’s sighs are drained.
And while I wondered on their being withdrawn,
Gagged by the smothering Wing which none unbinds,
I dreaded even a heaven with doors so chained.

A Dream Pang by Robert Frost

Not far, but near, I stood and saw it all
Behind low boughs the trees let down outside;
And the sweet pang it cost me not to call
And tell you that I saw does still abide,
But ’tis not true that thus I dwelt aloof,
For the wood wakes, and you are here for proof.

From ‘Love Is Not All’ by Edna St. Vincent Millay

It well may be that in a difficult hour,
pinned down by need and moaning for release
or nagged by want past resolution’s power,
I might be driven to sell your love for peace,
Or trade the memory of this night for food.
It may well be. I do not think I would.

From ‘Ozymandias’ by Percy Bysshe Shelley

And on the pedestal these words appear:
“My name is Ozymandias, king of kings:
Look on my works, ye Mighty, and despair!”
Nothing beside remains. Round the decay
Of that colossal wreck, boundless and bare
The lone and level sands stretch far away.

The Vantage Point by Robert Frost

And if by noon I have too much of these,
I have but to turn on my arm, and lo,
The sun-burned hillside sets my face aglow,
My breathing shakes the bluet like a breeze,
I smell the earth, I smell the bruisèd plant,
I look into the crater of the ant.

Yet in these thoughts myself almost despising,
Haply I think on thee, and then my state,
Like to the lark at break of day arising
From sullen earth, sings hymns at heaven’s gate;
For thy sweet love remember’d such wealth brings
That then I scorn to change my state with kings.

How would, I say, mine eyes be blessed made
By looking on thee in the living day,
When in dead night thy fair imperfect shade
Through heavy sleep on sightless eyes doth stay!
All days are nights to see till I see thee,
And nights bright days when dreams do show thee me.

Speak of the spring and foison of the year;
The one doth shadow of your beauty show,
The other as your bounty doth appear,
And you in every blessèd shape we know.
In all external grace you have some part,
But you like none, none you, for constant heart.

‘Gainst death and all-oblivious enmity
Shall you pace forth; your praise shall still find room
Even in the eyes of all posterity
That wear this world out to the ending doom.
So, till the judgment that yourself arise,
You live in this, and dwell in lovers’ eyes.

The summer’s flower is to the summer sweet,
Though to itself, it only live and die,
But if that flower with base infection meet,
The basest weed outbraves his dignity:
For sweetest things turn sourest by their deeds;
Lilies that fester, smell far worse than weeds.

Love’s not time’s fool, though rosy lips and cheeks
Within his bending sickle’s compass come;
Love alters not with his brief hours and weeks,
But bears it out even to the edge of doom.
If this be error and upon me proved,
I never writ, nor no man ever loved.

I love to hear her speak, yet well I know
That music hath a far more pleasing sound;
I grant I never saw a goddess go;
My mistress, when she walks, treads on the ground:
And yet, by heaven, I think my love as rare
As any she belied with false compare.

As those two mourning eyes become thy face:
O! let it then as well beseem thy heart
To mourn for me since mourning doth thee grace,
And suit thy pity like in every part.
Then will I swear beauty herself is black,
And all they foul that thy complexion lack.

But wherefore says she not she is unjust?
And wherefore say not I that I am old?
O! love’s best habit is in seeming trust,
And age in love, loves not to have years told:
Therefore I lie with her, and she with me,
And in our faults by lies we flattered be.

Past cure I am, now reason is past care,
And frantic-mad with evermore unrest.
My thoughts and my discourse as madmen’s are,
At random from the truth vainly expressed,
For I have sworn thee fair, and thought thee bright,
Who art as black as Hell, as dark as night.