Interesting Facts about Romeo and Juliet

We are all familiar with the tragic love story that chronicles the lives of Romeo and Juliet but in this article we give you some interesting facts about Romeo and Juliet, the characters and the eponymous play, that you may not have been aware of. 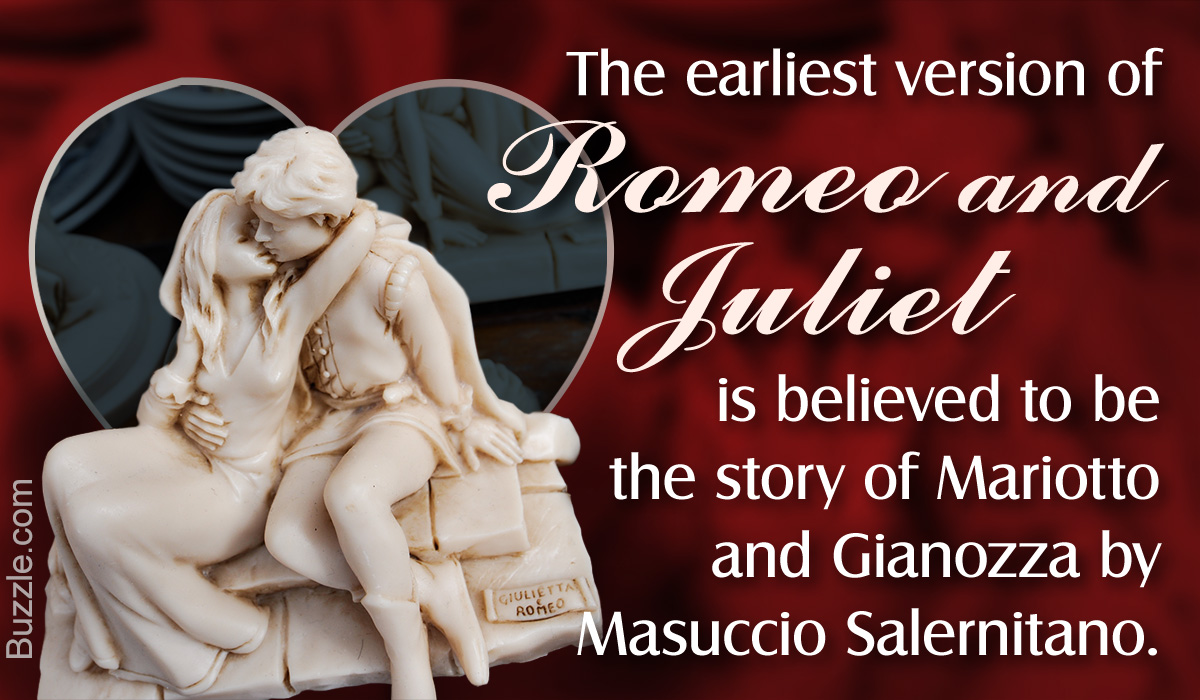 We are all familiar with the tragic love story that chronicles the lives of Romeo and Juliet but in this article we give you some interesting facts about Romeo and Juliet, the characters and the eponymous play, that you may not have been aware of.

Star crossed lovers whose families were dead set against their marriage; Romeo and Juliet have long been symbols of the tragedy that can sometimes befall young lovers. While this Italian tale had been a story passed down through oral retelling, it was only after William Shakespeare adapted it and then expanded it, that it became the legend that it is today. It is probably one of the most archetypical stories that has been told about teenage lovers. It is a well-known fact that Shakespeare’s version of Romeo and Juliet borrowed characters and the plot from Arthur Brooke’s retelling of the tale in his The Tragical History of Romeus and Juliet and William Painter’s Palace of Pleasure. It was Shakespeare’s genius though, that made Romeo and Juliet a classic literary piece with its well etched out supporting characters, its dramatic narrative structure and his adeptness at using both comedy and tragedy. Even today, Romeo and Juliet remains a classic tale taught and staged at many schools and colleges.

Trivia about Romeo and Juliet

Who is not familiar with the story of Romeo and Juliet? The young protagonists of the story, Romeo Montague and Juliet Capulet, belong to feuding families of Verona. At a ball thrown by the Capulet family, which Romeo attends in disguise, he meets and falls in love with Juliet. When he discovers that his feelings are returned, he meets her and they agree to get married. With the help and blessings of Friar Laurence, who hopes that the marriage will put an end to the animosity between the two families, the two get married. In the meanwhile, Tybalt, a cousin of Juliet’s, finds out that Romeo had attended the Capulet ball and duels with him. Romeo refuses to fight but his friend Mercutio who is now incensed, fights the duel and is killed. In grief, Romeo kills Tybalt. Due to his actions, the Prince of Verona exiles Romeo and declares that his return would result in his death. Romeo spends the night with Juliet before leaving.

Juliet is aggrieved at being apart from Romeo but her grief at losing her loved one is interpreted as grief for her dead cousin by her father, who then agrees to her marriage to Count Paris. Juliet meets Friar Laurence for help who gives her a drug that will give her the appearance of being dead for forty two hours. He also tells her that he would inform Romeo of the plan. The night before her wedding to Count Paris, Juliet takes the drug and she is placed in the family tomb, as she is believed to be dead. Romeo, in this time, has not received information about this plan and thinks that his love is dead. He buys poison and goes to the Capulet tomb to kill himself. When there he meets Paris who mistakes him for a vandal and duels with him. This leads to Paris’ death. Romeo then kills himself. When Juliet awakens, she sees Romeo dead and stabs herself. This eternal story of love and death is a moving tale of two innocent lovers. The play ends with the elegiac line, For never was a story of more woe, Than this of Juliet and her Romeo.

While the story is well-known, there are many interesting pieces of trivia that are not very widely known. The trivia given below about the protagonists of the tale and the play itself is surely something that you will find fascinating.

♥ While William Shakespeare’s inspiration for Romeo and Juliet came from the Arthur Brooke poem, the original tale is believed to be the story of Mariotto and Gianozza by Masuccio Salernitano.

♥ Juliet was merely thirteen when she first met Romeo at the Capulet ball. It is believed that she did have other older siblings but at the time of the events of the play she was the sole heir to the Capulet family fortune.

♥ Romeo Montague attended the Capulet ball to catch a glimpse of and meet Rosaline, a member of the Capulet family. He was infatuated by her but a chance meeting with Juliet had him besotted and in love with the latter.

♥ Romeo and Juliet were so sure of their love for each other that the two got married within twenty four hours of first meeting each other at the Capulet ball.

♥ First published in 1597 by Thomas Creede, the play was considered incomplete and even later the full title of the play was The Most Excellent and Lamentable Tragedy of Romeo and Juliet.

♥ Till date there have been as many as 77 movie versions of Romeo and Juliet which include adaptations and loosely based versions. The most famous versions are the movies made by George Cukor, Franco Zeffirelli, and Baz Luhrmann.