Understanding a literary device like irony can only be made simple with the help of examples. There are different types of irony that are used by authors and poets to express their views without overtly stating them. The examples of irony given here will help you understand how to use this figure of speech correctly. 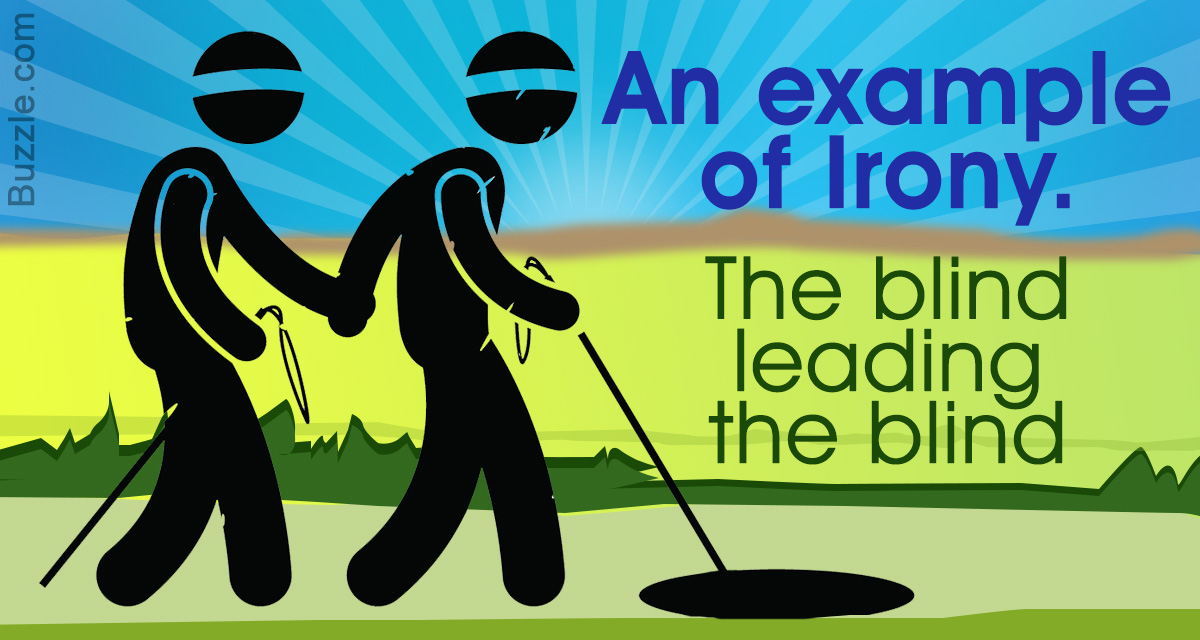 Understanding a literary device like irony can only be made simple with the help of examples. There are different types of irony that are used by authors and poets to express their views without overtly stating them. The examples of irony given here will help you understand how to use this figure of speech correctly.

Brain research tells us that only twenty percent of human beings have a sense of irony, which means that eighty percent of the world takes everything at face value.
–Doug Coupland

A literary device that brings about a whole gamut of changes in prose and poetry by introducing wit and sarcasm, irony, though heavily used, is hardly ever understood. The literary device uses the incongruity of what is said and what is meant or understood as its basis. The actual meaning of the statement lies beyond the obvious. And that is the whole idea of using such a literary device – the author is relying on the reader’s intelligence to discern the hidden meaning he wants to convey. Understanding irony takes a little time, patience, and perseverance. One way of interpreting the author’s conveyed meaning is to look at some examples of irony from famous literary works.

Examples of Verbal Irony in Literature

Verbal irony is a statement in which the meaning that a speaker employs is sharply different from the meaning that is ostensibly expressed. The ironic statement usually involves the explicit expression of one attitude or evaluation, but with indications in the overall speech-situation that the speaker intends a very different, and often opposite, attitude or evaluation.

Verbal irony is the use of words in such a manner that there is a disparity in expression and intention. In literature, when a character makes a statement that has an underlying meaning in contrast with the literal meaning of the sentence, the author is said to have employed verbal irony.

The author makes an ironic statement by using a simile that is obviously ironic in nature. He then proceeds to break down his simile, reversing its meaning. By creating a structure that is more complex than what a reader may usually expect, he creates a verbal irony that is enjoyable.

Yet Brutus says he was ambitious; And Brutus is an honorable man.

This example from the famous Friends, Romans, Countrymen… speech by Mark Antony is an oft-quoted instance of verbal irony. As a reader, you are completely aware of the full impact of Antony’s words which have a dark, underlying meaning to them, which is completely opposite to what has been said.

In Act 2, Lennox, in a conversation with Macbeth, talks about the weird events of the previous night. Macbeth replies with this seemingly affirmative observation. While Lennox is not able to grasp the full meaning of the statement, as a reader, you know that it an ironic reference to the murder of Duncan.

Two households, both alike in dignity…

The opening line of Shakespeare’s play leads the reader to believe that both the Capulet and Montague families are worthy of the respect that they are given in Verona. As the story progresses, you realize that neither household is dignified. In fact, several of their actions are unworthy of their standing in society. Shakespeare employed irony to bring forth this situation.

The Rape of the Lock, Alexander Pope

“It grieves me much,” replied the Peer again,
“Who speaks so well should ever speak in vain.”

In this poem by Pope, there is complete incongruity between what is said and what is meant because while the Peer talks about his grief and his appreciation for Sir Plume’s ability to talk well, you know from the preceding lines that the Peer is not aggrieved at all and in no manner does he think that Sir Plume has spoken well.

Examples of Dramatic Irony in Literature

The incongruity created when the (tragic) significance of a character’s speech or actions is revealed to the audience but unknown to the character concerned; the literary device so used, orig. in Greek tragedy.

With this type of irony the author/poet gives the reader some information that all or at least one of the characters in the play are completely in the dark about. This allows the audience to be one step ahead of the character and understand the irony in some of their actions.

While the audience is aware that Oedipus himself is the murderer he is seeking, Creon, Jocasta and Oedipus are unaware of this fact.

The reader remains aware of the fact that Juliet takes a sleeping potion to feign death, and at the end of the play, when Romeo kills himself after thinking that Juliet is dead, the reader is struck by the tragic irony.

The Tragedy of Othello, the Moor of Venice, William Shakespeare

As the play progresses, the reader realizes that Iago is scheming to bring about Othello’s downfall and that Desdemona has never been unfaithful to Othello, but Othello himself remains unaware of this and implicitly trusts Iago which causes his tragic end.

The poem is narrated by a duke describing the portrait of his former wife who died of supposedly natural causes. Throughout the poem, the duke unwittingly lets on that he had her killed because of his uncontrollable jealousies, allowing the reader to see something about the duke that he would rather keep concealed.

In this story, the reader is aware from the very beginning that Montressor is planning the murder of Fortunato, but the latter remains unaware of this and he considers Montressor his friend. The mystery for the reader remains the motive behind murder.

Simply put, dramatic irony is when a person makes a harmless remark, and someone else who hears it knows something that makes the remark have a different, and usually unpleasant, meaning. For instance, if you were in a restaurant and said out loud, “I can’t wait to eat the veal marsala I ordered,” and there were people around who knew that the veal marsala was poisoned and that you would die as soon as you took a bite, your situation would be one of dramatic irony.

Examples of Situational Irony in Literature

Situational irony, sometimes called irony of events, is most broadly defined as a situation where the outcome is incongruous with what was expected, but it is also more generally understood as a situation that includes contradictions or sharp contrasts.

Situational irony is a style employed when the author creates a situation and leads the reader to believe that a certain ending is expected, when the actual ending is completely in contrast.

The entire plot of the story is an example of situational irony. The protagonist, Dorothy travels to the wizard to discover a way to go home only to learn that she had the ability to do so all the time. The Scarecrow wants to be intelligent, and he learns that he is a genius. The Woodsman thinks he is incapable of love and he discovers he has a heart. The Lion comes across as a huge coward who turns out to be extremely courageous and fearless. The Wizard who was revered by everyone turns out to be an eccentric old man with absolutely no special powers.

Romeo attempts to bring about peace between Mercutio and Tybalt and eventually the Montagues and the Capulets. But the death of Mercutio and Romeo’s pledge thereafter to kill Tybalt only escalates the situation and leads to his exile and both, his and Juliet’s deaths.

The poet compares the evening to “a patient etherized upon a table.” By taking a conventionally beautiful natural image and comparing it to a painful medical procedure of modernity, Eliot uses situational irony to depict the loss of natural beauty in a corrupted world.

The Necklace or The Diamond Necklace, Guy de Maupassant

The entire story is a case of situational irony. The protagonist Madame Loise, in order to keep up appearances, borrows jewelry from a well-to-do friend and then loses it. Her husband and she replace the jewels but the replacement takes a toll on their financial conditions. Years later, when she meets the same friend again, she learns that the jewels she replaces with real gemstones was mere costume jewelry.

Irony, though so oft used in popular media and literature, is also one of the most misused figures of speech, especially after the release of the song ‘Ironic’ by Alanis Morissette which ironically talks more about coincidences. With these examples, you will know how the literary device should be actually used.