Trying to convey a message by comparing two unlike entities that have something in common is known as metaphor. Metaphor examples in literature is what we will be looking into in this article. 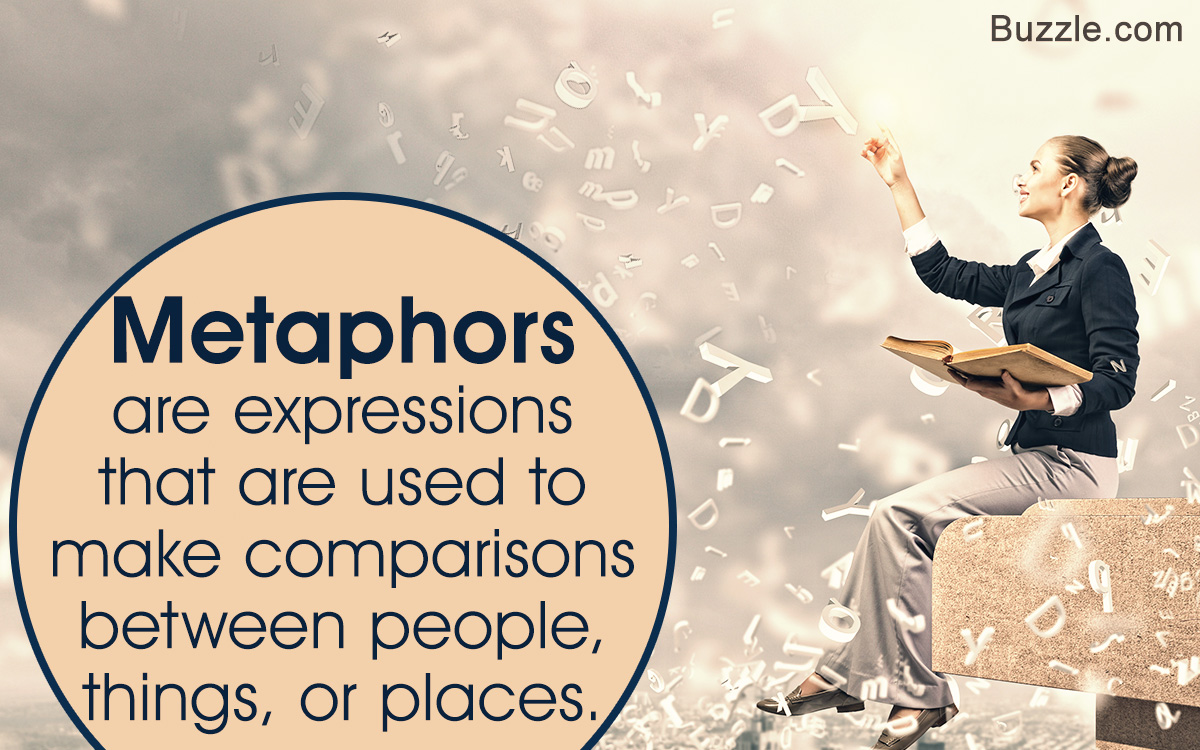 Trying to convey a message by comparing two unlike entities that have something in common is known as metaphor. Metaphor examples in literature is what we will be looking into in this article.

“Life is a cherished possession, death is an inevitable loss..“

The above statement is one of the simple metaphor examples in literature. A metaphor is a part of the figures of speech list in which two unlike entities are compared to convey some hidden message. It is not just a comparison but an assertion of the entities that they are nearly something to which they are being compared. There is yet another figure of speech known as simile which appears quite similar to a metaphor. The difference lies in the observation part of the usage of a simile and a metaphor.

Types and Examples of Metaphors in Literature

“Oh God! He was so mad at me!” – This is an example of a simple metaphor in our colloquial language. Here mad means anger. This has one link joining the metaphorical sense (mad) to the subject (anger). This figure of speech is classified as common and uncommon types. The common types include extended and mixed metaphors whereas uncommon types comprise absolute, active, complex and compound metaphors. One must have a strong understanding of rules of English grammar and grammar and composition to understand metaphor examples in literature.

Absolute Metaphor: This is a metaphor in which there is little connection between the metaphorical sense and the actual entity. This is mostly intended to confuse the readers.

Example – “A television set is the autobahn of a living room.”
This is an example of an absolute metaphor where the object has absolutely no relation with the metaphor used for the former’s assertion. Sometimes, this is also referred as paralogical metaphor. The main intention of such metaphorical usages are to confuse the readers, allowing them to draw their own interpretations.

Complex Metaphor: A complex metaphor is one that is used to identify with some other entity by layering over a simple metaphor.

Example – “Let me throw some light on this subject of philosophy.”
This is an example of a complex metaphor where “throw some light” is used as metaphor to clear some point. In literary sense, there is actually no light.

Extended Metaphor: This is a metaphor in which there is one primary subject and several other secondary objects used for comparison.

Example – “All the world’s a stage and men and women merely players. “
This is the famous line from William Shakespeare’s play – ‘As you like it’. It is supposedly one of the best examples of extended metaphor, in literature. The world is described as a stage which is the primary entity and men and women are the subsidiary subjects who are a part of the stage.

Implicit Metaphor: As the name suggests, here the core context of the text is not explicitly stated as it is implied as self understandable.

Example – “It was extremely hot during the day. We were almost roasted!“
This is an example of an implicit metaphor where roasted gives the underlying meaning of how hot it was during the day.

Mixed Metaphor: Mixed metaphor is a collection of metaphors which may not necessarily align well with each other. Their usage is most of the time deliberate and spontaneous. Sometimes they add a comic punch to the statements.

Example – “Driving down the dangerous terrains of Guatemala was nothing but playing with fire in the belly.“

This is a mixed metaphor example in literature where driving has been compared with fire in the metaphorical sense. Take a sample – “Jenny was pretty cool the day before the Chemistry paper. She is weak in Chemistry and was never good at it. Jenny has topped the subject now. Needless to say, her aunt was her Chemistry teacher. I smell a rat for sure!” Here, “I smell a rat” is an instance of a mixed metaphor example in literature, where relating the “smelling a rat” to an instance has no logical relation.

Pataphor: Pataphors are extreme metaphors. They go way beyond in expressing a statement by using extensions of a simple metaphor.

Example – “James and Sandra are having a casual conversation where James coyly signals for a date. Sandra agrees to catch up on the coming Friday. Once she leaves, James messages Helen about going on a date on Thursday. James smiles as the message from Helen beeps “Yes”. So finally he was done with his checkmating for the day!“

Here the pataphor is created by the word – “checkmating”, where there is an imaginary chessboard with characters although there is no literary context of the game attached to it.

Root Metaphor: These are tricky metaphors hidden within a language. They do not reveal explicitly as metaphors. At times these metaphors pave ways for other metaphors to spring from them. Root metaphors basically reflect the understanding of the individual about a particular situation.

Submerged Metaphor: This metaphor is an elaboration of a simple statement in an expressive way. When we are told about something, we always tend to imagine a bigger picture of it. So the metamorphic linking to the subject is expressed in a big way.

Example – “Even before the project started, Jenny’s thoughts were already on the wings“
Here the relation of thoughts to wings is an example of a submerged metaphor where the thoughts are projected in a wider picture by comparing them with wings of a bird.

I hope the above stated examples in literature have been useful in understanding the meaning of a metaphor, its different types and their usages. This figure of speech is definitely tricky when it comes to conveying hidden but bold messages. After all, they help in making strong statements in a subtle manner.