Simple Tips on Writing an Effective Explication of a Poem

Looking for poetry explication outline? While analyzing a poem, you should be able to explain what makes the poem so appealing...the hidden meaning, beauty of words, images used in the poem, etc. The following article provides poetry explication guidelines with an example. 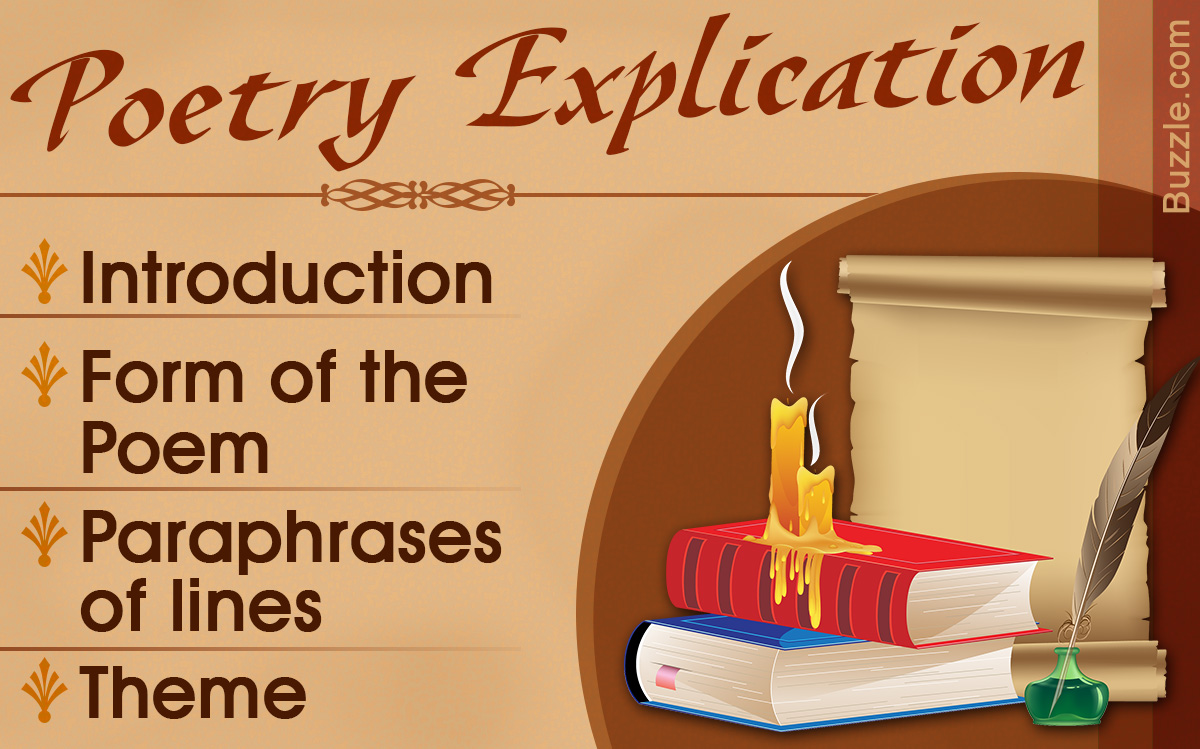 Looking for poetry explication outline? While analyzing a poem, you should be able to explain what makes the poem so appealing…the hidden meaning, beauty of words, images used in the poem, etc. The following article provides poetry explication guidelines with an example.

Poetry explication is a detailed analysis of the given poem. A classic poetry explication consists of the theme, meaning of the poem, images, symbols, rhyme, plot, conflicts, and many other smaller units that form a poem.

Poetry is defined as “The interpretive dramatization of experience in metrical language”. There are various aspects of studying poetry. Poetic language consisting of denotation and connotation, imagery, figurative language consisting of metaphors, personification, etc., and hundreds of rhetorical devices like hyperbole, ambiguity, irony, paradox, etc., are the basic elements of poetry. For writing a good explication of a poem, you should be conversant with the types of poetry and forms of poetry like narrative, emotional, historical, symbolic, allegory, etc. You should also be familiar with all the basic terms related to poetry like versification, rhyme, meter, lines of verse, stanza, sonnet, alliteration, onomatopoeia, etc. The following section explains how to approach a poem step by step and how to write a good and detailed explanation of the given poem.

Here you are expected to write what is the poem title, who is the author and where one can find this poem, what is the theme and subject of the poem in short.

Form of the Poem

What is the type of the given poem; is it a lyric poem or an ode, haiku, sonnet or some other form you can identify? Here you also need to mention how the characteristics of the identified type are applicable to the poem.

Here you are supposed to explain the meaning of the poem line by line and stanza by stanza. While explaining, you should also discuss the elements of a poem like figure of speech, meter, rhyme scheme, rhythm, imagery, symbolism, structure, etc. Skillfully organize this part in a way that best fits your content. Whether to discuss sound traits first and then figurative traits like personification, symbol, metaphor, etc., will solely depend upon the nature of the poem.

After explaining the poem in detail, you may propose what the theme is and support/defend your interpretation. You should succeed in showing that you have reached a reasonable conclusion.

Here, you are expected to make judgments about the poem. Ask yourself the following questions and try to answer them.
How effectively did the author explain his/her point or how the author was successful in creating an intended mood or other impact?
According to you, which elements of the poem were the strongest or weakest and why?
Which images or metaphors did you find interesting or effective and why?
What can you say about the rhyme scheme used?
Did it add any value to the poem, whether it contributed to the poem or distracted?, etc.

It would be safe to conclude now about the speaker and the theme, about what is being embellished by the author and how the action takes place in the poem. Are the thoughts efficiently conveyed by the author through the finely embroidered themes introduced, sustained, resolved, etc.?

A poem by Robert Frost, ‘The Road Not Taken’ is a world famous poem.

TWO roads diverged in a yellow wood,
And sorry I could not travel both
And be one traveler, long I stood
And looked down one as far as I could
To where it bent in the undergrowth;

Then took the other, as just as fair,
And having perhaps the better claim,
Because it was grassy and wanted wear;
Though as for that the passing there
Had worn them really about the same,

And both that morning equally lay
In leaves no step had trodden black.
Oh, I kept the first for another day!
Yet knowing how way leads on to way,
I doubted if I should ever come back.

I shall be telling this with a sigh
Somewhere ages and ages hence:
Two roads diverged in a wood, and I-
I took the one less traveled by,
And that has made all the difference.

In the poem titled ‘The Road Not Taken’ by Robert Frost, Frost describes an old man reflecting on a choice he had once made. This is a narrative poem, comprising four stanzas of five lines. In the poem, the poet suggests that a decision can change your life as it has far-reaching, significant consequences.

Frost tells us that choices are extremely important. At the beginning of the poem, the speaker regrets that at some specific point in his life he could not take two roads, and had to be confined to one road only. He tried his best to see what was ahead on one of the roads he could have taken, but there were limitations as the road turned and disappeared in the bushes.

In the second stanza, the poet emphasizes that the other road was grassy and less traveled and, therefore, he consciously took that road. He stresses that it was perhaps better, but, not much more than the other road.

In the third stanza, the poet again portrays both roads as covered in leaves that had been walked on very rarely, to the extent that the leaves covering them had not turned black because of tramping of feet. He also asserts that he continued on the road he chose and that he already knew the fact that one thing leads to another and so he wondered if he would ever return to the other road.

Finally, in the last stanza, he illustrates that he will tell his story to others when he is much older. He would tell others that he had the choice of taking one road over another and the road that he chose, has made a big difference in his life.

Elements of the Poem

One who reads the poem, enjoys the rhyme. Frost uses a ABAAB, CDCCD, rhyme scheme: For instance, wood, both, stood, could, undergrowth from stanza one.

Frost has beautifully added the element of color while developing the theme. The picturesque description of yellow wood suggests the fall season when leaves turn colors. Colors and seasons have their own interpretations and reflect different emotions as they are frequently associated with different stages in people’s lives, such as spring for youth and autumn for late middle age. So it is safe to conclude that this is the ‘fall’ of his life or he is possibly around middle age. Since he has had enough experiences to realize how important some decisions can be, he accepts that he must live with the consequences. The simple idea ‘The leaves are not trodden black’ efficiently represents absence of heavy traffic.

The poem is a characteristic example of the metaphorical language used by Frost, comparing the roads to options people can take in their lives. No one can consider several ways in life at one time to see how each will work out, since no one can look ahead to see where each choice might lead. No one is able to foretell the future or where the other choices regarding each of those ways would have led. One must choose only one road and see where it will lead. One thing the speaker accentuates is that the choice is not to be taken lightly because it could, as he realizes while he reflects, be the difference between two very different life experiences.

“The Road Not Taken” is an enjoyable and thought-evoking poem. The tone and mood has been kept light by Frost though he is presenting a very serious subject. Though he is speaking with reference to his simple memories, he is successful in conveying strong point. He makes us think more seriously about our past and future decisions and their potential consequences. Reading this poem again and again is a joyful experience. A common experience of Frost, making a choice at the junction of two roads, is an experience with which everybody can relate to. Everyone reading the poem feels happy to accept that a decision taken at some point in our life leads us in a particular direction and choosing to go in that direction can make a profound difference in our lives.

The rhythm used in the poem is iambic tetrameter. It refers to a line of poem consisting of 4 iambs (where an unstressed syllable is followed by a stressed syllable) or 4 feet. This means when the poem is read aloud, four beats can be heard. As mentioned above, the figure of speech metaphor is used as a style of writing in the entire poem. In the poem, life is compared to a journey made by a traveler.

Here, we can easily relate to the idea of roads because we all have, at some point in our life, probably arrived at two roads, literally and have been uncertain about which way to turn. Later in our life, we turn and look back to discover that we chose the wrong way and that has led us somewhere we had not intended to. We know, how even relatively unimportant decisions change our lives significantly.

You may choose a small poem of your own choice and explain it in your own words. You would accept that explaining a poem is an art. One who loves poetry would love to explain the meaning of a poem in poetic language. Good Luck!