The night can either be a friend to the content, or a foe to the lonely. Robert Frost's "Acquainted With The Night" is a beautiful poem of a lonely man and his relationship with the night. This Penlighten post gives you the summary and analysis of the poem. 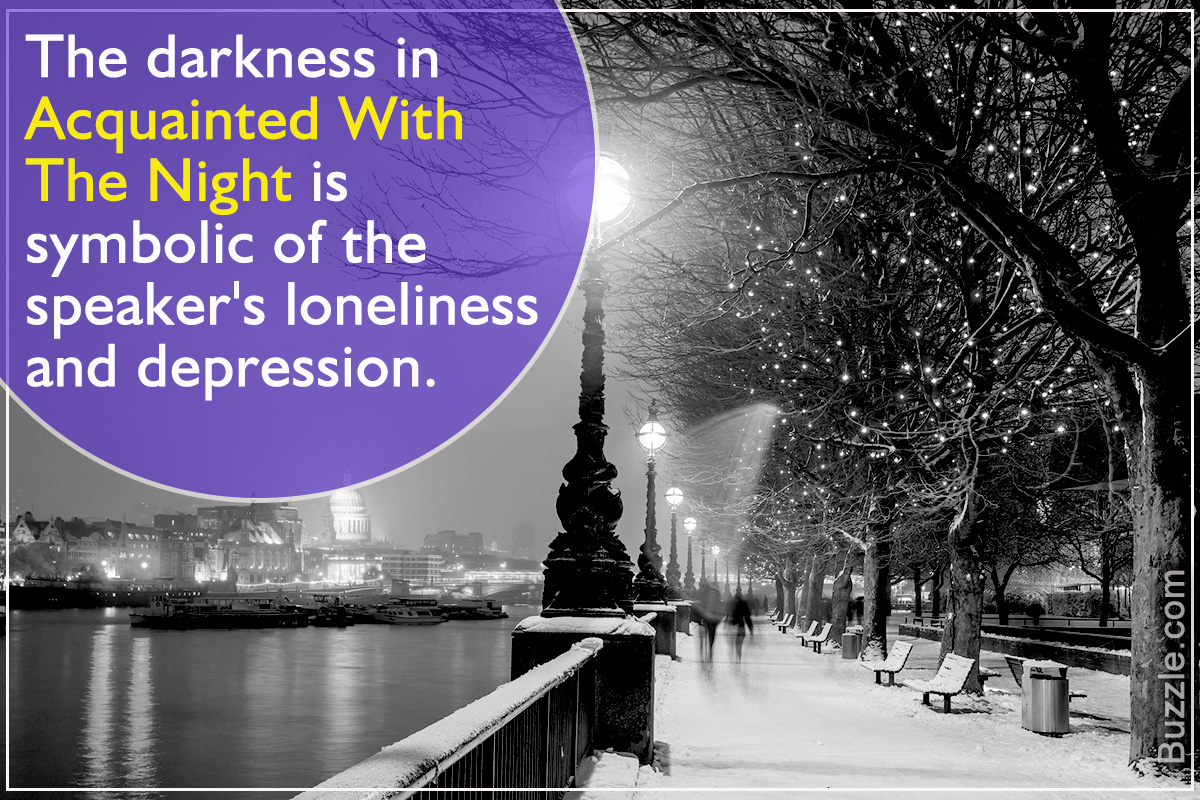 The night can either be a friend to the content, or a foe to the lonely. Robert Frost’s "Acquainted With The Night" is a beautiful poem of a lonely man and his relationship with the night. This Penlighten post gives you the summary and analysis of the poem.

“They cannot scare me with their empty spaces
Between stars―on stars where no human race is.
I have it in me so much nearer home
To scare myself with my own desert places.”

For each one of us, this holds true, the night can be interpreted in a variety of ways, depending upon our emotions at the time, the situations we may be in, and our surroundings at the time, too. Sometimes, the night may be a fascinating time to think, to hear our own thoughts. Sometimes, the night feels depressing and melancholy, and sometimes, the night feels strange. You know there’s nothing wrong, but nothing seems right either. All of us experience these feelings, and hence, it can be rightly assumed that this poem will make sense, will appeal to us in a very personal way. Acquainted With The Night speaks to every reader, and hence, it is one of the easier poems to understand.

Acquainted With The Night is written with a terza rima rhyme scheme, which was introduced to poetry by the famous Italian poet Dante. Critics have observed that terza rima (or third rhyme) is much easier to compose in Italian than in English, and hence, it is considered to be a matter of great pride and accomplishment that Robert Frost managed to do so flawlessly. He remains one of the few American poets to have mastered terza rima, along with many other forms of poetry.

I have been one acquainted with the night

The speaker says he and the night are acquaintances, and that he is well familiar with the night by now. Remember, though, the poet takes great care to specify that the speaker is “acquainted” with the night, and not “friends” with it. This means that though the speaker knows the night well, he holds no love or hatred for it.

I have walked out in rain-and back in rain.

The speaker says that he has walked out to wherever he’s going, in the rain, and has returned home in the rain, presumably at night. The word ‘rain’ is meant to bring attention to how sad the speaker was, at the time, as well as the uncomfortable feeling of being outside the house in a bad mood when it’s raining.

I have outwalked the furthest city light

I have looked down the saddest city lane

The speaker says that he has been a witness to the most depressing lanes and streets in the city when he’s out walking by himself at night. It isn’t clear why the speaker thinks the lanes are sad, it could be that they remind him of all that he is unhappy about, or it could be that those particular streets house the poorest of the poor in that city, or it could even be that those lanes are uninhabited. Whatever may be the reason, those city lanes make him feel desolate.

I have passed by the watchman on his beat

When the speaker is out walking on dark and lonely nights, he has often come across the watchman, who might be a guard, or a policeman, out on his rounds. Roaming around the city at night is normal for the watchman, who is simply doing his job, and it is possible that he might be suspicious of a lone man walking down the street.

And dropped my eyes, unwilling to explain.

Even as he passed the watchman, the speaker did not meet his eyes, or interact with him in any way. There might be several reasons for the absence of contact between the two―the speaker is too lost in his own depressing thoughts to want to stop and explain to the watchman about his reasons for being outside so late at night, or the watchman is simply unapproachable and suspicious of the desolate figure, or the speaker just wants to be left alone. He doesn’t want to explain himself, or talk to someone about what he’s going through.

I have stood still and stopped the sound of feet

When out on the dull, solitary nights, the speaker has come to a halt while walking. This line paints a clear picture of how dark and lonely the night really is, for the speaker is walking in complete silence, and the only sound being heard is the sound of his feet when walking on the street. The speaker has suddenly stopped walking for some reason, and the sound of his feet, which was his sole companion, has now abandoned him too.

When far away an interrupted cry, came over houses from another street

These lines tell us why the speaker suddenly stopped walking. From another street, he heard a cry, or a shout, maybe, which was distorted because of the distance. This shout had nothing to do with him, and yet, he wonders who would cry like that on a terrifyingly sad night like this, and why.

But not to call me back or say good-by;

The speaker was disappointed when he realized that the cry wasn’t for him, though he wished it was. The speaker wished the cry could have been someone calling him to come back home, or someone calling out, saying a goodbye till they met again. However, it was just a random cry of a random person in the city, and he realized that he had nobody who cared enough to ask him to not be out on a night like this.

And further still at an unearthly height, one luminary clock against the sky

The fact that there was nobody crying out for him has made the speaker sadder. He looks up at an ‘unearthly height’ meaning, very high up in the sky, where the moon shines brightly, guiding the way. The luminary clock in the poem in fact, is the moon itself, and since the speaker is acquainted with the night, he is maybe trying to figure out what the time is by looking at the moon. The speaker feels that the moon is too far away, again pointing out the loneliness that he is feeling, along with a lack of connection with anyone.

Proclaimed the time was neither wrong nor right.

The moon ‘proclaims’ to the speaker that his guess about the time is neither correct and nor is it incorrect―the speaker is so well-acquainted with the night that the time doesn’t even matter anymore. The speaker feels that no matter what the time, his life, his thoughts right now, neither feel right nor wrong, and yet, he feels lonely, and unhappy.

I have been one acquainted with the night.

The night
The night is a symbol for darkness, and the loneliness, and depression faced by the narrator of the poem.

The moon
The luminary clock, or in better words, the moon, stands for a glimmer of hope far away.

The distance
The speaker mentions distance a lot―be it between him and the moon, or the distance he covers when walking at night, or the distant cry he hears. This distance is symbolic of the mental distance between the narrator and the world. He feels lonely, disconnected, and unhappy.

The walking
Throughout the poem, the speaker talks about his walking in the city at nighttime. This walking is symbolic of the speaker’s grudging will to go on, to carry on with living, despite any unhappy circumstances that may surround him.

The tone of Acquainted With The Night is mainly melancholic. The speaker is wallowing in self-pity, and dejection. The themes of this poem too, are depression, fear, loneliness, and self-pity.

Acquainted With The Night is a poem that speaks to each one of us in some way or the other―the night can sometimes be a friend, while sometimes, it’s a foe. What does the night mean to you? Are you ‘one acquainted with the night’?