A Beautiful Summary and Analysis of ‘The Lady, or the Tiger?’

Frank R. Stockton's short story "The Lady, or the Tiger?" has won critical acclaim for its captivating narration and speculative suspense at the end. Penlighten helps you understand the story better by giving a summary and further analysis on it.

Home / Uncategorized / A Beautiful Summary and Analysis of ‘The Lady, or the Tiger?’ 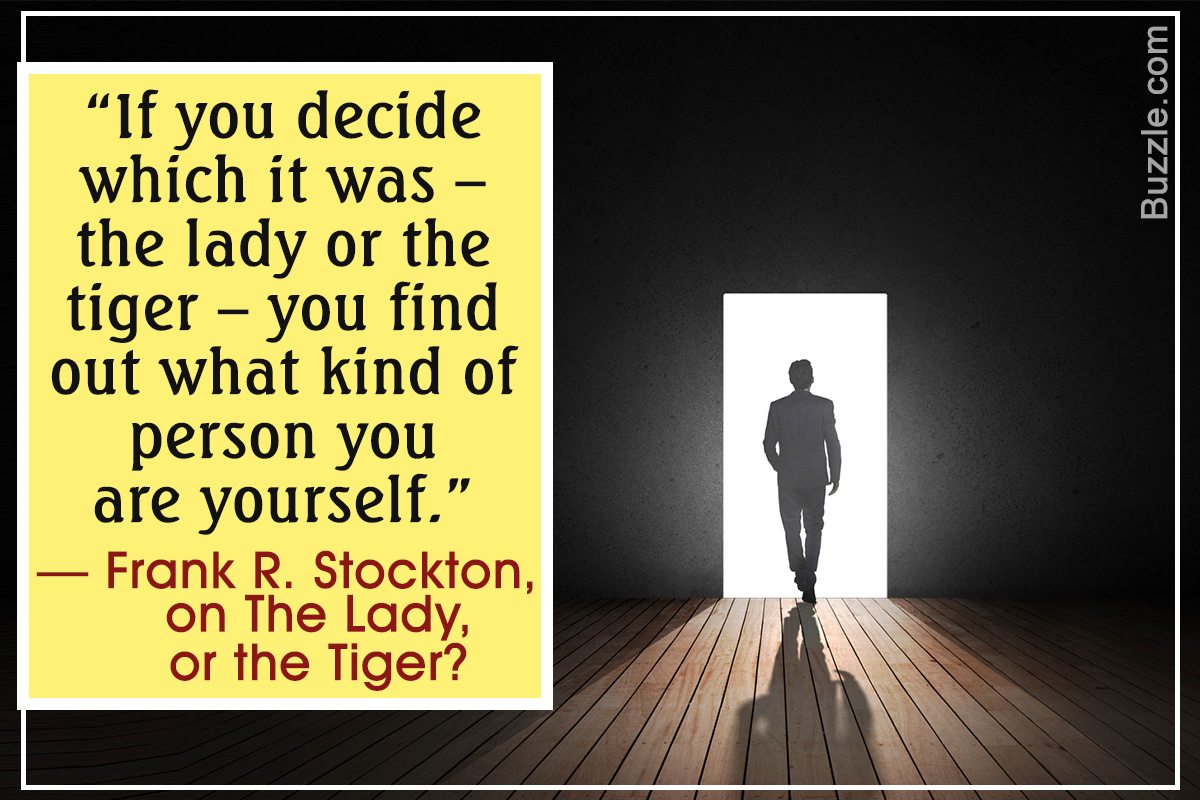 Frank R. Stockton’s short story "The Lady, or the Tiger?" has won critical acclaim for its captivating narration and speculative suspense at the end. Penlighten helps you understand the story better by giving a summary and further analysis on it.

Frank R. Stockton, an American writer and humorist was discouraged from taking up a career in writing by his father despite the fact that besides being a Methodist minister, he was a writer himself.

Until 1860, Stockton worked as a wood engraver and after his father’s death took to writing again. 1867 saw Stockton’s launch as a writer in his brother’s newspaper and the publication of his very first fairy tale, Ting-a-ling.

The Lady, or the Tiger?, a short-story penned by Frank R. Stockton (1834-1902), was published in The Century Magazine in 1882. It was included as the title story in Stockton’s 1884 collection of twelve stories. This intriguing story describes the brutal ways of a half-barbaric king in imputing justice, and the struggle of a princess to free her lover from awaiting doom.

The story takes the readers by surprise with a speculative end, leaving it to them to decide the outcome. Let us find out more about the story…

Analysis: The Lady, or the Tiger?

◆ The story is narrated in the third person addressing the readers directly. The story is set in the ancient times. It begins with the narrator introducing a semi-barbaric king, semi-barbaric because he has a civilized Latin influence on his life. However, he unleashes his barbaric side by exercising an unusual system of justice on his people when found guilty of any crime.

The accused is placed in an arena all by himself, which has two doors. The accused is faced with the task of choosing one of the doors which would lead him to freedom. The other, of course, would be sure death. The door that leads to freedom has a maiden sitting behind it, whom the accused would have to marry right away leaving no room for his opinion. Whereas, the other door has a ferocious, hungry tiger behind it. The doors are identical, and this is what gives the story a nail-biting finish.

◆ This system of justice enthralled the audience as the fate of the accused was in his own hands. They loved the experience of sitting at the edge of their chairs to witness the outcome―freedom or death.

◆ The story proceeds further with an interesting twist to it where the king’s daughter―the princess―falls in love with a commoner. When the king discovers this affair, he turns livid and summons his soldiers to arrest the commoner and put him behind bars. He calls for the game to begin. In the meanwhile, he sends out his soldiers to find the most ferocious and dangerous man-eating tiger to be put behind one of the doors. The softer side of him chooses one of the most beautiful maidens for the young man to be put behind the other door.

The princess being madly in love with her lover, plots to free him. She secretly, with power and money, finds the door to freedom and the maiden who would be sitting behind it. Unfortunately for her, the maiden is also in love with the commoner, and the princess detests her for that.

◆ Finally, on the day of the trial, she sits along with her father―the king―in the arena to witness the final outcome. As the accused lover is presented before the king, he looks up to her, and she signals with her right hand indicating that he should take the right door. As the young lover moves forward to open it, the narrator abruptly stops the story. Thus, leaving it to the readers to decide on the conclusion―Liberty or Doom.

◆ The story ends in a suspense, and the narrator sets out the princess’s dilemma. The princess was aware that she will be asked for help by her lover. The princess loved the commoner; however, she had a barbaric streak in her. She had imagined the horror of the tiger eating her lover, and on the other hand, she was tormented by the thought of her lover marrying someone else whom she hated. In any case, the princess had lost her lover. However, it was in her power to decide to whom she would lose her lover.

◆ The narrator describes the princess’s anguish and dilemma from the time her lover was cast into prison. The endless nights of sleeplessness, the will and power that she exudes to free her lover, the agony of losing him to another woman, and the fear of seeing her lover being devoured by a tiger― the choice was hers. She knew she had to decide and that she did. The softer, angelic nature in her overcame the barbaric, jealous one, and she set her lover free.

The end still remains a mystery. Did the door open to a beautiful maiden or a fierce tiger ready to tear the young man to pieces?

◆ The story develops around more than one theme.

◆ The story is divided in three parts.

◆ The three main characters of the story are the king, the princess, and the commoner.

◆ The king is described as outwardly sophisticated and polished with a hidden murderous, savage nature.

◆ The commoner is described as a handsome young man who loves the princess deeply.

◆ Both characters are stereotypes, and do not undergo much change in the story.

◆ The princess’s character has more shades than any other character in the story. The emotional upheavals of losing her lover to another woman or the tiger, brings out both sides to her nature. From the possessive, detesting side to a merciful, loving one, the princess’s emotions are tossed from side to side like a storm causing the boat to rock from side to side.

◆ The entire story is based on conflicts―the conflicting nature in the king, the conflict of emotions in the princess who has to take a decision, and the doors depicting conflicts of life and death.

◆ Irony is present throughout the story. For example: the lover’s complete trust in the princess to show him the correct door. The trial day unfolds the truth of the princess’s revelation on which of the doors would either set her lover free or kill him. Worst still, is her decision to let him marry the maiden and not let the tiger tear him to pieces.

◆ Most stories depict the characters being influenced by outer forces, uncontrollable situation or destiny. However, this story focuses on the power of choice. The king allows the accused to choose his verdict (in a way). The entire story is based on choices, not knowing which side the scales will tilt. The narrator ends the story in suspense, letting the readers decide the outcome. The message is clear that life is based on the choices we make.

Stockton said: “If you decide which it was―the lady or the tiger―you find out what kind of person you are yourself.” Well, he definitely did not have an answer. Though, he had planned an appropriate ending to the story, he could not write one, as he states further “for I had not the advantage of being either semi-barbaric or a woman.” meaning he left the choice to the reader to let the shrewd, wicked side of one take precedence over the harmless dove-like side or vice-versa.