Aesop's fables have remarkably imparted some of the most crucial lessons of life to us all through personification of animals and things. This Penlighten post discusses the summary and meaning of one such fable―'The Fox and the Grapes'. 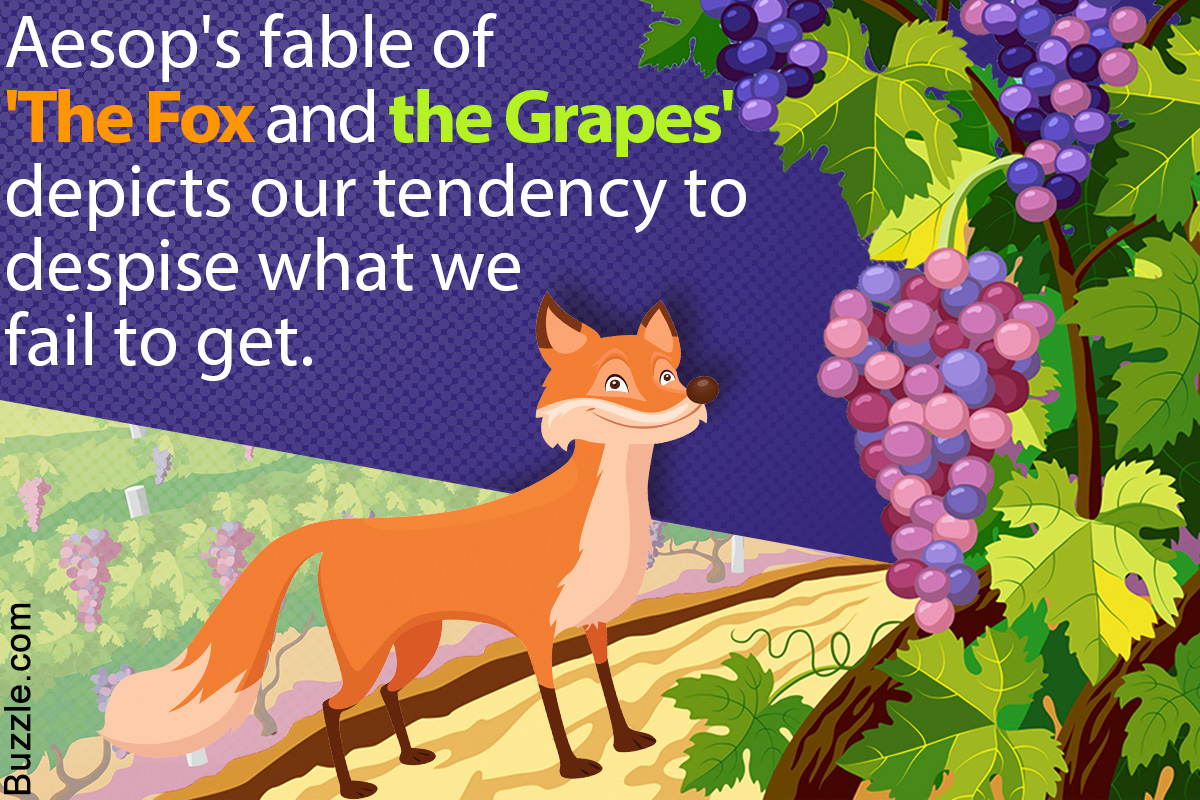 Aesop’s fables have remarkably imparted some of the most crucial lessons of life to us all through personification of animals and things. This Penlighten post discusses the summary and meaning of one such fable―’The Fox and the Grapes’.

Although Aesop is widely recognized as the original composer of the many fables in the Aesopica, in truth, there is no record that these fables were written by Aesop himself. It is believed that he orally narrated his stories, and thus they traveled to Greece, several centuries after his death.

The story of ‘The Fox and the Grapes’ is perhaps one of the most popular fables of Aesop in the literary world. In fact, it was the theme of this story that led to the development of the English idiom, ‘Sour Grapes’! Now, we all know why and when this expression is used. We tend to use these two words to describe the situation where the incompetence or inability of a person to turn a desire into reality, leads to him/her being indifferent towards the desire. As the moral of the story is popularly quoted: “It is easy to despise what you cannot get.”

This tale, along with other Aesop’s fables, was originally written in Greek by Demetrius of Phalerum. Then, the Latin translation was performed by Phaedrus in the Ist century. In the late 17th century Jean de La Fontaine translated these tales in French, popularly known as La Fontaine’s Fables. These stories have been traveling from one culture to another even before the time of Christ! Then, is it possible that the original meaning and connotation of this story has somewhere been lost in translation? Most of you would say that how can a simple story with a simple meaning be misinterpreted? Well, read on.

The Story of ‘The Fox and the Grapes’

This story has many versions, as there are many writers and poets that have translated it from one era to another. The first writer to translate Aesop’s fables in English was William Caxton. However, the another popularized version of this tale is that of V.S. Vernon Jones. His version is mentioned as under.

“A hungry Fox saw some fine bunches of Grapes hanging from a vine that was trained along a high trellis, and did his best to reach them by jumping as high as he could into the air. But it was all in vain, for they were just out of reach: so he gave up trying, and walked away with an air of dignity and unconcern, remarking, ‘I thought those Grapes were ripe, but I see now they are quite sour.'”

Another, comparatively elaborate, version of the story that highlights the efforts of the fox to get the grapes, and also summarizes the moral of the story, is written as follows.

“One hot summer’s day a Fox was strolling through an orchard till he came to a bunch of Grapes just ripening on a vine which had been trained over a lofty branch. ‘Just the thing to quench my thirst,’ quoth he. Drawing back a few paces, he took a run and a jump, and just missed the bunch. Turning round again with a One, Two, Three, he jumped up, but with no greater success. Again and again he tried after the tempting morsel, but at last had to give it up, and walked away with his nose in the air, saying: ‘I am sure they are sour.’

It is easy to despise what you cannot get.”

The French poet, Jean de La Fontaine, concluded the story with an ironic comment and a pun. The following version has been translated from French by Elizur Wright.

“A fox, almost with hunger dying,
Some grapes upon a trellis spying,
To all appearance ripe, clad in
Their tempting russet skin,
Most gladly would have eat them;
But since he could not get them,
So far above his reach the vine–
‘They’re sour,’ he said; ‘such grapes as these,
The dogs may eat them if they please!’
Did he not better than to whine?”

This is one of the very few instances in the Aesop’s fables where we see only one animal protagonist. The fox, tired from the scorching heat of the sunny afternoon, notices a bunch of grapes hung at quite a height. He immediately craves for them as they would serve well to quench his thirst. He tried to do all things possible within his measures to get hold of the grapes―from running to jumping to leaping! Finally, tired of trying, he finally gives up on them, rationalizing his failure by believing that the grapes were sour after all! To which, Jean de La Fontaine adds a remark, asking the readers, if it is better for the fox to be happy with this lie, or keep whining about the fact that he couldn’t get the grapes?

As simple as the story seems, there are certain aspects to it that makes its interpretation, a tad bit complicated. One point that alters the meaning, or introduces the scope for an alternate interpretation, is the use of the word ‘sour’. Interestingly, the Greek word used in this context was ‘όμφακες εισίν’ (omphakes eisin), which means ‘unripe grapes’. This phrase has a double meaning, where it is apt to address both, unripe grapes and an underage woman not old enough to be married. Some speculators suggest that the word ‘unripe’ was purposely replaced by ‘sour’, due to the sexual ambiguity associated with the term. Nonetheless, the accuracy of the meaning behind the story can be questioned, considering the fact that if the fox let go of the grapes because they were not ripe, perhaps he could think of returning again at an appropriate time, with a better strategy to get them?

Moral of the Story

The widely accepted moral associated with this tale is, “It is easy to despise what you cannot get.” The fox was unable to get what he desired, for which he spend so much of his time and efforts, but all in vain. Finally, in order to rationalize the situation he tells himself that they were unfit for consumption anyway, so he should best move on. This just highlights the human tendency to come to terms with a failing situation, without considering oneself as a failure. We refuse to accept our incompetency and begin to speak ill of the unachievable. Note, that in some versions, it has been mentioned that the grapes appeared as ripe, so there are chances that weren’t unripe after all! Hence, the moral of this story can also be interpreted as, “One tends to speak ill of the things that one cannot attain.”

If we look at this story from varied angles, perhaps we would gain a better understanding of what this story actually teaches us. To begin with, it teaches us to set our goals after careful thinking and planning. The fox was tempted when he saw the luscious bunch of grapes that were apt enough to quench his hunger/thirst. Without giving a second thought about how he would get them, and, if he has the means and skills to get them, he wasted his energy and time over something that was unachievable. If he had speculated the possibilities of the fruition of this endeavor, he would have gone elsewhere to quench his desires. The fox probably realized his stupidity, but because his ego/pride compelled him to not accept his foolishness, he blamed it all on the character of the grapes! On a brighter note, this story can also teach us to not be like the fox by undertaking goals that are within our reach, and/or by being equipped with the right means to attain a difficult goal.