Understanding the Implied Use of Refrain in Poetry With Examples

There's always one song that recurs persistently in your head and you just can't stop crooning it. This happens with poems as well folks, may be it is a line or a group of lines that appears in a poem that stuck with you and you unwittingly keep saying it; you have probably taken shining to 'refrain'. In this Penlighten post, let us understand the use of refrain in poetry with examples. 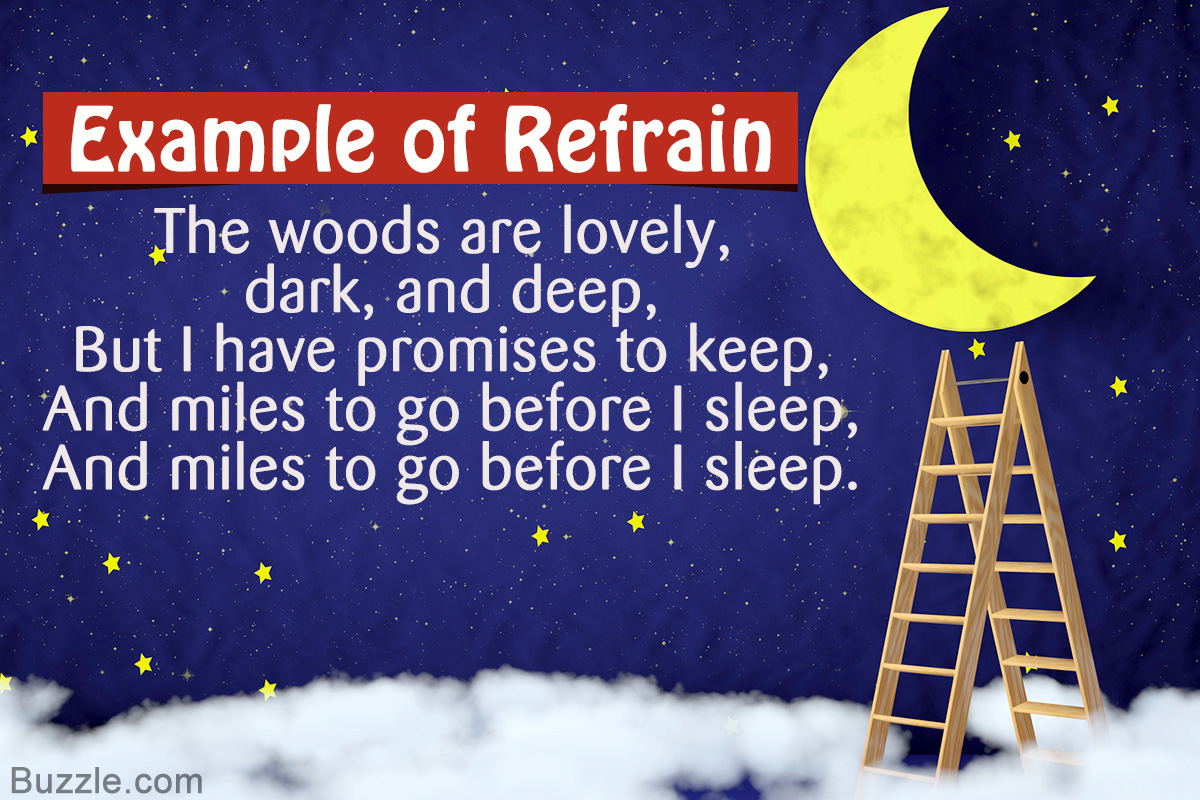 There’s always one song that recurs persistently in your head and you just can’t stop crooning it. This happens with poems as well folks, may be it is a line or a group of lines that appears in a poem that stuck with you and you unwittingly keep saying it; you have probably taken shining to ‘refrain’. In this Penlighten post, let us understand the use of refrain in poetry with examples.

Judith Nicholls, one of Britain’s acclaimed children poets, repeats a stanza as a refrain in her poem Lord Neptune.

The word ‘refrain’ comes from the Old French word ‘refraindre’, which means to repeat. To explain it further, refrain is a poetic technique employed by poets to add stress to a line, group of lines, word or group of words to convey a certain idea in the poem. This technique is also used to create a natural and powerful rhythm in the poem by means of repetition.

The Free Dictionary defines refrain as “a phrase, verse, or group of verses repeated at intervals throughout a song or poem, especially at the end of each stanza.”

A refrain ideally comes after a stanza or between two stanzas. The idea behind utilizing this type of repetition is to add weight to a point or idea in a piece of poetry and bring it to the reader’s notice. For example, if a poet repeats the line, “dispirited, disheartened, discouraged, the soul slipped in a state of eternal despair” at intervals, maybe at the end of every stanza, the reader’s attention is drawn to the prominent idea of hopelessness and dejection.

Likewise, refrain also helps to give the reader some rhythmic sense as readers are perceptive of repetition’s role of natural rhythm and are likely to take a pause when they find it throughout a poem. Refrain also works as a breather from the continuous progression of the poem by connecting the reader back to the point from where he started. It also works the other way round―it keeps the readers involved when the poem undergoes progressive events by adding an element of excitement and eagerness as the meaning of the poem transitions as the poem furthers. This is also why refrains change slightly in form or meaning.

Let us now see some examples of refrain to understand it better.

“Do Not Go Gentle into That Good Night” by Dylan Thomas

Do not go gentle into that good night,
Old age should burn and rave at close of day;
Rage, rage against the dying of the light.

Though wise men at their end know dark is right,
Because their words had forked no lightning they
Do not go gentle into that good night,

Good men, the last wave by, crying how bright
Their frail deeds might have danced in a green bay,
Rage, rage against the dying of the light.

Wild men who caught and sang the sun in flight,
And learn, too late, they grieved it on its way,
Do not go gentle into that good night,

Grave men, near death, who see with blinding sight
Blind eyes could blaze like meteors and be gay,
Rage, rage against the dying of the light.

And you, my father, there on the sad height,
Curse, bless, me now with your fierce tears, I pray.
Do not go gentle into that good night,
Rage, rage against the dying of the light.

Dylan Thomas repeats the lines, “Rage, rage against the dying of the light” and “Do not gentle into that good night”, which act as refrains. By repeating these lines, Thomas tells his father to content with death even when chances of his survival look bleak.

“In Paris With You” by James Fenton

Yes I’m angry at the way I’ve been bamboozled
And resentful at the mess I’ve been through.
I admit I’m on the rebound
And I don’t care where are we bound.
I’m in Paris with you.

Do you mind if we do not go to the Louvre
If we say sod off to sodding Notre Dame,
If we skip the Champs Elysées
And remain here in this sleazy

Old hotel room
Doing this and that
To what and whom
Learning who you are,
Learning what I am.

Don’t talk to me of love. Let’s talk of Paris,
The little bit of Paris in our view.
There’s that crack across the ceiling
And the hotel walls are peeling
And I’m in Paris with you.

James Fenton’s “In Love With Paris” uses the title as a refrain, which changes slightly in form as it appears in different stanzas.

“One art” by Elizabeth Bishop

The art of losing isn’t hard to master;
so many things seem filled with the intent
to be lost that their loss is no disaster.

Lose something every day. Accept the fluster
of lost door keys, the hour badly spent.
The art of losing isn’t hard to master.

Then practice losing farther, losing faster:
places, and names, and where it was you meant
to travel. None of these will bring disaster.

I lost my mother’s watch. And look! my last, or
next-to-last, of three loved houses went.
The art of losing isn’t hard to master.

I lost two cities, lovely ones. And, vaster,
some realms I owned, two rivers, a continent.
I miss them, but it wasn’t a disaster.

-Even losing you (the joking voice, a gesture
I love) I shan’t have lied. It’s evident
the art of losing’s not too hard to master
though it may look like (Write it!) like disaster.

In Elizabeth Bishop’s poem, “One art”, the refrain “the art of losing isn’t hard to master” is repeated in almost all stanzas; however, it appears in slight variations.

It was many and many a year ago,
In a kingdom by the sea,
That a maiden there lived whom you may know
By the name of ANNABEL LEE;
And this maiden she lived with no other thought
Than to love and be loved by me.

The angels, not half so happy in heaven,
Went envying her and me-
Yes!- that was the reason (as all men know,
In this kingdom by the sea)
…

Stopping by Woods On a Snowy evening by Robert Frost

Robert Frost uses refrain in the last stanza of his poem, “Stopping by Woods On a Snowy evening” through the couplet “And miles to go before I sleep” to accentuate the idea that he has a long journey to finish before taking the final rest (death).