Literary Examples That Show the Correct Way of Using Ellipsis

A writer makes use of a handy literary device called ellipsis when he wants to dismiss certain parts of a text that are superfluous. This Penlighten post accumulates ellipsis examples in poetry and prose to help you understand this device better. 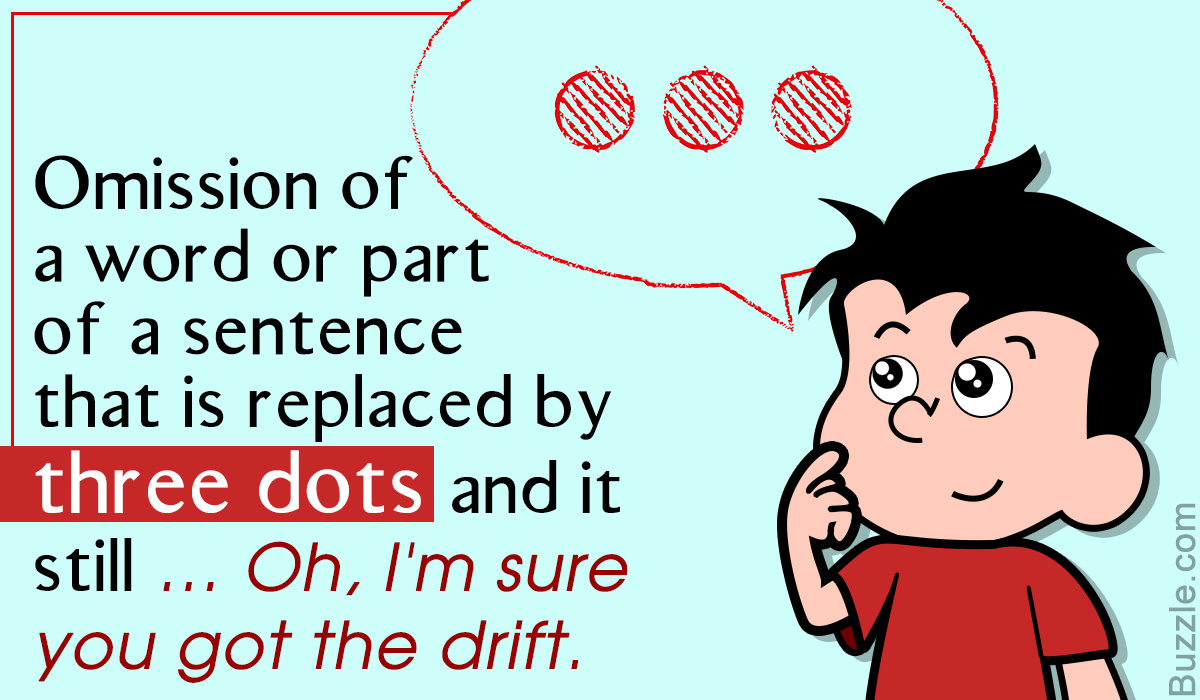 A writer makes use of a handy literary device called ellipsis when he wants to dismiss certain parts of a text that are superfluous. This Penlighten post accumulates ellipsis examples in poetry and prose to help you understand this device better.

The Iceberg Theory or the Theory of Omission was developed by American writer Earnest Hemingway in 1923. Hemingway believed in this minimalist style of writing in which “the omitted part strengthens the story.”

The word ellipsis originated from the ancient Greek word elleipsis, which means omission or falling short.

According to the Merriam-Webster dictionary, ellipsis means, “the act of leaving out one or more words that are not necessary for a phrase to be understood. A sign (such as …) used in printed text to show that words have been left out.” Using this tool, a writer chooses to omit unnecessary words, lines, paragraphs, or even events from a literary piece. Three periods are written in a row to point out to the missing part in printing. However, in olden times, a dash or an asterisk was used as well. Sometimes, there is no special sign used, but sentences are written one after another without indicating an omission. However, three dots are in major practice to show the omission.

The main purpose of it is to save time. Omitting unnecessary parts of the story can help it advance further. In literary and academic writings, ellipsis is used to trim the quotes to fit to their text. It gives clarity and brevity to the text. Narrative writers use this device to express their ideas, which they may not do openly. The placement of the ellipsis changes its meaning from an unfinished thought, a slight pause, to an uneasy silence. A proper use of ellipsis in a sentence helps the writer to suggest his desired meanings. It coaxes readers to fill in the gaps using their imagination.

Most commonly, ellipsis occurs between sentences. For example:

► “Everybody’s at war with different things . . . I’m at war with my own heart sometimes.” ― Tupac Shakur

However, ellipsis can occur at the beginning as well as at the end of a sentence. When the beginning part of a sentence is omitted, it is not necessary to indicate it with dots. However, a writer can add the ellipsis for artistic purpose. For example:

► . . . and she decided to leave her inhibitions behind.

► . . . then, the detectives visit the crime scene to collect evidences.

When an ellipsis occurs at the end of a sentence, it follows the period of the complete sentence. Therefore, one usually gets to see four dots between two sentences. For example:

► He thought about it over and over again . . . . until he could not think anymore.

It might get confusing to recognize the ellipsis in these sentences due to the use of four dots in a row. However, the full stop is easily distinguishable as no space it given between the last word of the sentence and the period.

Let us see some examples of ellipsis in literature.

From Dream Variations by Langston Hughes

To fling my arms wide
In the face of the sun,
Dance! Whirl! Whirl!
Till the quick day is done.
Rest at pale evening . . .
A tall, slim tree . . .
Night coming tenderly
Black like me.

I’m Nobody! Who are you? By Emily Dickinson

In earlier times, dashes were used to indicated ellipsis instead of dots.

From Hamlet by William Shakespeare

Hamlet:
To the next abstinence: the next more easy;
For use almost can change the stamp of nature,
And either . . . the devil, or throw him out
With wondrous potency. Once more, good night:
And when you are desirous to be bless’d,
I’ll blessing beg of you.
(Act III, Scene IV)

King Claudius:
Come, Gertrude, we’ll call up our wisest friends;
And let them know, both what we mean to do,
And what’s untimely done . . .
Whose whisper o’er the world’s diameter,
As level as the cannon to his blank,
Transports his poison’d shot, may miss our name,
And hit the woundless air.
(Act IV, Scene II)

‘It was-simply amazing,’ she repeated abstractedly. ‘But I swore I wouldn’t tell it and here I am tantalizing you.’ She yawned gracefully in my face. ‘Please come and see me . . . Phone book . . . Under the name of Mrs. Sigourney Howard . . . My aunt . . .‘ She was hurrying off as she talked-her brown hand waved a jaunty salute as she melted into her party at the door.
(Chapter 3)

His life had been confused and disordered since then, but if he could once return to a certain starting place and go over it all slowly, he could find out what that thing was . . .

. . . One autumn night, five years before, they had been walking down the street when the leaves were falling, they came to a place where there were no trees and the sidewalk was white with moonlight.
(Chapter 6)

To the Lighthouse by Virginia Woolf

A fellowship, a professorship, he felt capable of anything and saw himself – but what was she looking at? At a man pasting a bill. The vast flapping sheet flattened itself out, and each shove of the brush revealed fresh legs, hoops, horses, glistening reds and blues, beautifully smooth, until half the wall was covered with the advertisement of a circus; a hundred horsemen, twenty performing seals, lions, tigers . . . Craning forwards, for she was short-sighted, she read it out . . . “will visit this town,” she read.
(The Window)