What is verbal irony? What are its examples? Given below is an article that answers all of these questions and more... 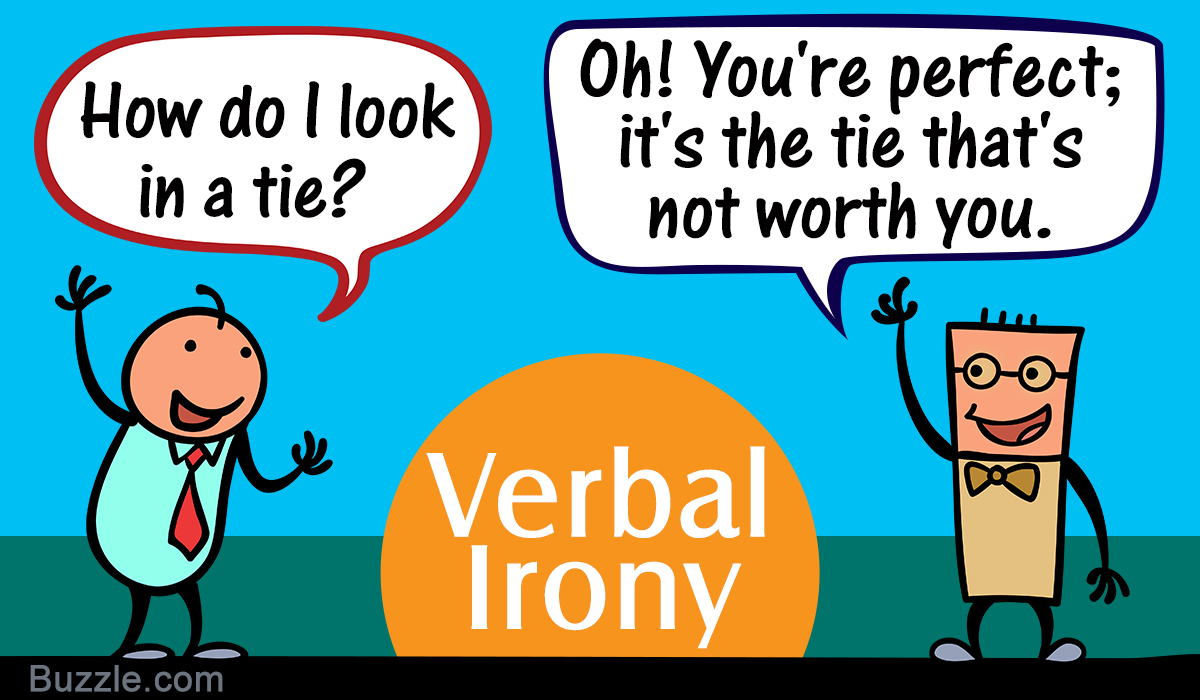 What is verbal irony? What are its examples? Given below is an article that answers all of these questions and more…

Verbal irony is a figure of speech in which the intended meaning of a statement actually differs, and is often the opposite of what is said. This term was first introduced to English criticism in 1833 by Bishop Connop Thirlwall in an article on Sophocles. One hears verbal irony in conversations all the time. For instance, someone ends up burning a cake or if the milk spills over and says “Oh Great!” This is one of the simplest examples of verbal irony. Thus, verbal irony is, by far, the most accessible, far-reaching, and most commonly used form of irony as is sarcastic humor. This is because it is the simplest form as it just involves the equation of two people talking to one another whereas other forms of irony more often than not require a ‘third’ party, generally an audience of some sort to interpret that scenarios as ironic, as is the case especially with situational irony.

When it comes to verbal irony, timing is the most important factor. If an ironic comment comes too late or too early in a conversation, or is spoken without the correct tone or in an inappropriate circumstance, it may be considered to be offensive, or it may even simply confuse the person. Thus, verbal irony, in its essence, requires:

Here are some examples which explicitly explain verbal irony.

Everyday Examples
One of the many examples of verbal irony that kids come across in everyday life is when they do something to annoy their parents. Rather than taking to getting angry immediately, parents try to say an ironic statement to get the message across. Here are a few examples.

Example 1: When a mother walks into a room and sees that her children, instead of doing their homework, are playing video games, she gives them a stern look and says, “Once you’re done with your very important work there, let’s take some time out for recreation in the form of some chemistry problems.”

Example 2: A mother makes the least favorite dish for her kid and the kid tends to just sit at the dinner table playing with his food, much to the annoyance of both parents. Then when he says “Do I have to eat this now mom?” and the mother replies “Of course you don’t have to eat that right now dear, you can just eat it when you’re really hungry!”, then you know you have one of the most expected verbal irony examples right there!

Examples from Literature
Example 1: In Act III Scene V of Romeo and Juliet by William Shakespeare, Juliet is upset at being told that her father has promised her hand in marriage to Paris rather than Romeo, who she loves. She has fully made up her mind to be married to Romeo, so she ironically states to her mother”…I will not marry yet; and, when I do, I swear it shall be Romeo, whom you know I hate, rather than Paris …”

Example 2: One of the most well-known examples of verbal irony is in the Prologue in Act I of Romeo and Juliet, which opens with “Two households, both alike in dignity, …”. When you first read this line, you may think that the two families are quite dignified or honorable. However, as the play goes on, you realize that each family is violently competitive. Thus, they are actually similarly undignified.

Examples from Movies
Example 1: The movie Shrek is a perfect example when it comes to verbal ironies. The little spats that Donkey and Shrek keep having are really the best way to understand this figure of speech.

Donkey: Can I stay with you? Please?
Shrek: Of course.
Donkey: Really?
Shrek: NO.

Example 2: This one’s from the movie Die Hard. It oozes sarcasm and hence is an easy way to grasp verbal irony.

McClane: Is the building on fire?
Powell: No, but it’s gonna need a paint job and a shitload of screen doors.

Understanding irony is not as difficult as most people think it is. Verbal irony is the best way to begin, because spoken words tend to linger longer than written ones. So learn as fast as you can as these are things that beautify the English language!