What Does Ad Hoc Mean and How to Use it in the Right Context?

There is often a lot of confusion surrounding the term ad hoc and what it stands for. In this following Penlighten article we will give you an explanation of what ad hoc means and how to go on to use it in the right context.

Home / Uncategorized / What Does Ad Hoc Mean and How to Use it in the Right Context? 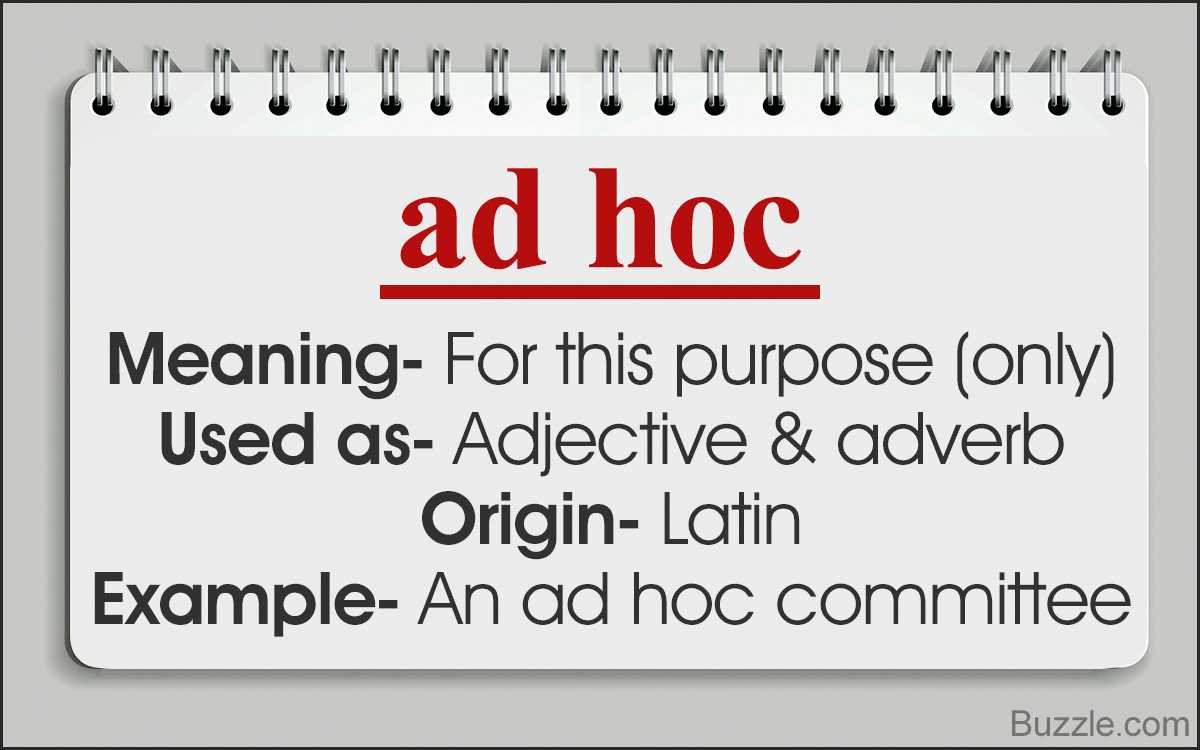 There is often a lot of confusion surrounding the term ad hoc and what it stands for. In this following Penlighten article we will give you an explanation of what ad hoc means and how to go on to use it in the right context.

The English language has drawn several influences from varied languages of the world. That is why several foreign phrases make way into the English language and one starts to find a reference to them. But then it is just as true that while a sentence with a foreign phrase sounds all that important and interesting, it can get equally confusing if one has absolutely no idea what the word or phrase means. In this article, we will talk about the word ‘ad hoc’ and try to understand what it means and the context of its usage, and provide examples of the same. Continue reading to get a thorough explanation regarding what does ad hoc mean.

Ad Hoc is a Latin phrase and literally means ‘For this’ or ‘Towards This’. When one confers from this term, it directly translates to ‘For this purpose (only)’―that is the ad hoc definition.

But what does ad hoc mean in context and what exactly does it signify?

Ad hoc is a concept that is designed such that it provides for a solution as, when, and how the situation demands it. It means that a particular action was not a part of the original plan and that it had to be designed to suit the demands of the task at hand. In that way, we do things on an ad hoc basis whenever a situation demands action, rather than it being arranged for from beforehand.

This also makes it clear that the purpose of the ad hoc is usually specific and specialized and cannot be carried over or adopted for other purposes.

Example 1.
Now that you know the meaning of ad hoc, let’s give you a very simple, everyday life example to help you understand this concept better. Let’s suppose that you have invited some friends over to watch a match on TV. While you’re busy enjoying the game, something blows up and the reception is disrupted. This is something that you haven’t planned for. As a result, you come up with an ad hoc plan which is directed at identifying the problem and looking for a solution. So it’s an impromptu committee that is directed at getting the problem fixed and is something that was not a part of the original plan.
Example 2.
If a legal problem occurs in an office and demands a solution, then an ad hoc committee will be responsible for finding a (ad hoc) lawyer who will be approached for legal advice because he specializes in that field. What makes it ad hoc is the fact that the situation presented itself at the last minute and the legal advice cannot be carried over to any other situation.

The earlier example was used to explain the ad hoc concept to you in more clarity. The term ad hoc is used most frequently in the context of ‘setting up an ad hoc committee’ to provide solutions for a particular set of problems that have come up in a meeting or a work set up. To use ad hoc in a sentence―An ad hoc committee was set up to look into the Walt report and draw up the required changes.

Another context that it can be used in is ―We deal with the problems that come up in our project report on an ad hoc basis. Meaning, as they happen.

Ad hoc is also used quite frequently in the contexts of information technology and in journalism as well.

Though ad hoc might not be used in an everyday context, it is a very handy word, and now that you know what it means and the contexts it can be used in, you can make use of it well enough.