A Tremendous Metamorphosis: Words Whose Meanings Changed Over Time

Evolution is for real, people! Lest we ruffle quite a few conservative feathers, we're referring to the English language here. Take a look at this incredible list of words that have changed meaning over time. 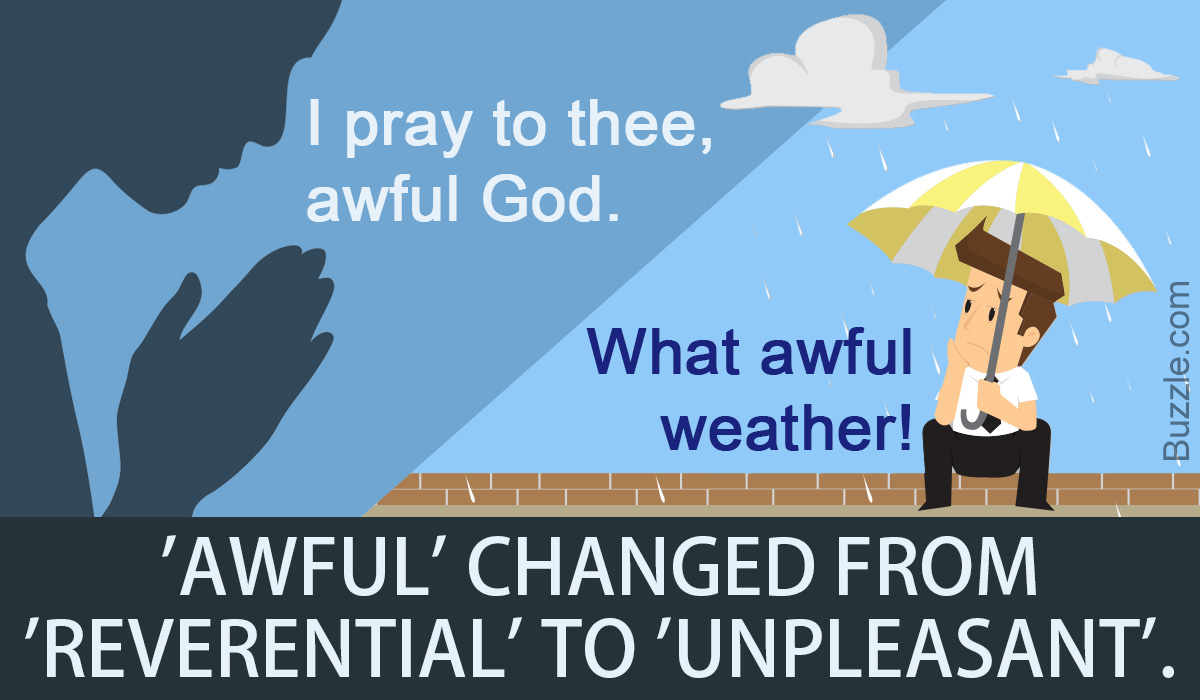 Evolution is for real, people! Lest we ruffle quite a few conservative feathers, we’re referring to the English language here. Take a look at this incredible list of words that have changed meaning over time.

“If the English language made any sense, lackadaisical would have something to do with a shortage of flowers.”
― Doug Larson

The less said, the better it is for the English language and all its idiosyncrasies. As with all other aspects of human life, our languages have also undergone tremendous metamorphosis. And it’s perfectly natural, isn’t it? After all, human culture has always thrived on change―be it by means of travel, communication, or just plain influence and inspiration.

Back in the 16th century, the word bully was used to describe a beloved person. Over time, it gained notoriety to be used for someone who was a show off, until today, when it refers to someone who takes pleasure in intimidating and harassing the weak.

The word ‘awful’ lived a simpler existence in the older times when it actually meant “full of awe”. It was used in a reverential manner, just as the language gods meant things to be. Cut to this day, when it has become an adjective used to portray negative feelings. On a slightly different note, hilarity ensues when people tend to confuse ‘awful’ with ‘awesome’, which happens to be its antonym.

This one’s fairly recent, until a few years ago, ‘gay’ used to mean ‘happy’ and ‘carefree’. In fact, we still tend to spend a day at the beach with ‘gay abandon’, know what we’re saying? The younger lot, however, only seem to be acquainted with its recent association with male homosexuality.

There was a time when ‘egregious’ used to be a compliment, referring to distinguished or outstanding individuals or things. But this was the 16th century, and things have changed for worse, especially in the case of ‘egregious’. We now use it to describe something that is outstandingly bad or blatantly offensive.

‘Garble’ actually used to mean the exact opposite of what it’s understood as today. We know of the word to mean ‘confused or incoherent language’, while its erstwhile meaning was ‘to sort out’, indicating a sense of clarity.

‘Cute’ was derived from the word ‘acute’, which originally meant shrewd or sly. But this was the 18th century. Over a hundred years later, American slang shortened and transformed ‘acute’ to ‘cute’, even changing its meaning to ‘pretty’ or ‘dainty’.

Just as with ‘cute’, the word ‘nice’ had a completely different meaning back during the 13th century, when it meant ‘foolish, stupid, or senseless. From then on, its negative associations only grew to include extravagance and ostentation. However, it was the 18th century society’s fondness for these qualities that brought it to its current usage.

Myriad was a word coined by the Greeks to denote 10,000 units. Although we still use it to indicate volume or abundance, its mathematical usage has more or less been phased out.

No, it’s not the movie. The word ‘matrix’ reminds us of puzzles or grids that may need some solving. In the actual, ‘matrix’ has its roots in the Latin word “matr”- or mater, meaning a pregnant being, and went on to be understood as womb.

‘Buxom’ has indeed come a long way from when it used to mean humble and obedient back in the 12th century. Over time, it progressed to mean ‘compliant’ (think ‘bendy’), to healthy, plump, and down to the way we recognize it today―well-endowed.

This was just the proverbial tip of the iceberg. The English language, or any other language, will continue to evolve alongside the humans who use it. But long words or short, remember to have fun while you learn this amazing language.