Funny Tautology Examples: You Might Be Using These Everyday!

Tautology is nothing but repeated use of words or phrases that have a similar meaning. Simply put, it is saying the same thing twice. In this article we'll give you some easy and funny tautology examples that you might be using knowingly or unknowingly.

Home / Uncategorized / Funny Tautology Examples: You Might Be Using These Everyday! 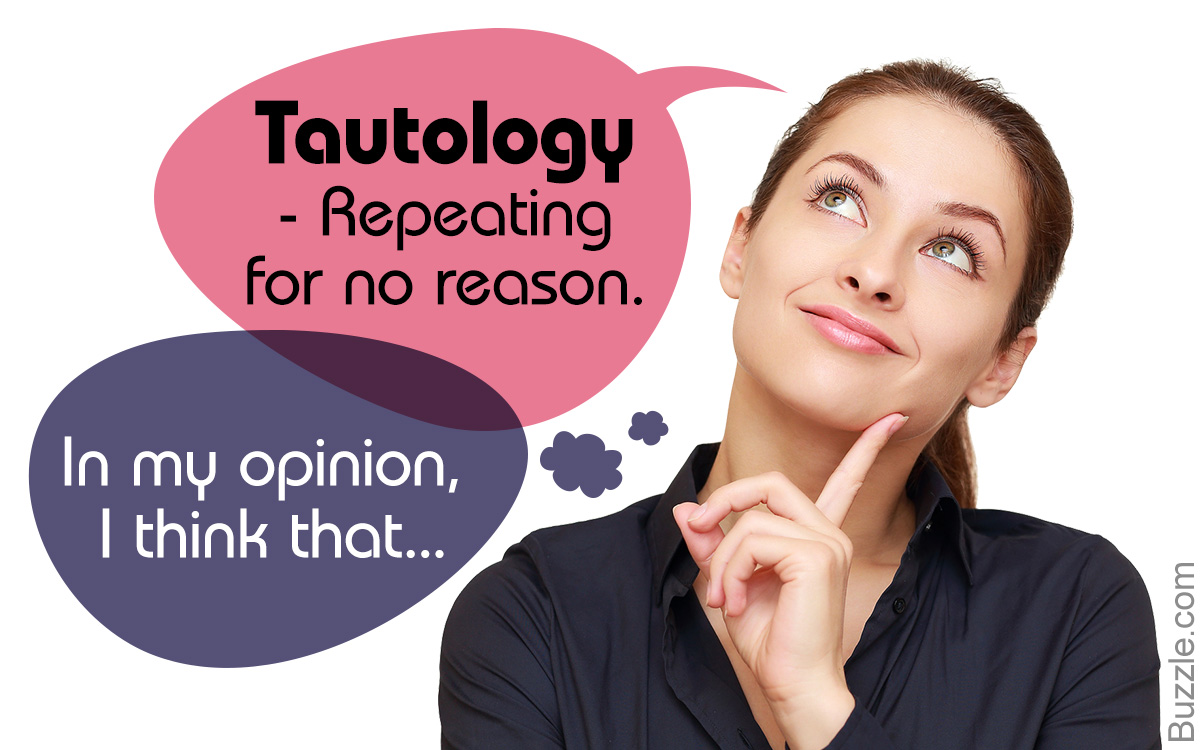 Tautology is nothing but repeated use of words or phrases that have a similar meaning. Simply put, it is saying the same thing twice. In this article we’ll give you some easy and funny tautology examples that you might be using knowingly or unknowingly.

The Oxford Advanced Learner’s Dictionary defines Tautology as: “A statement in which you say the same thing twice in different words.”

In other words, tautology is unnecessary repetition. For example ‘They spoke in turn, one after the other” is considered a tautology because “in turn” and “one after the other” mean the same thing. You will find many tautology examples used a way to state the obvious truth or fact or as a hint to indicate something important that is about to happen, or is generally intended, to stress the importance of a particular word in literature, advertising, movies, songs, etc.

Let’s start with some tautology examples, spoken or used by us in our everyday lives.

☀ Are these supplies adequate enough?
☀ In my opinion, I think that…
☀ So the organization expects joint cooperation from its members.
☀ This is a short summary of…
☀ It was his usual, habitual custom to have a bacon sandwich for breakfast.
☀ One after the other in succession…
☀ To reiterate again.
☀ Close proximity.
☀ They decided to return again for a second time to that old ancient house.
☀ 3 a.m. in the morning.
☀ Necessary requirement.
☀ Lonely isolation.
☀ I had a tuna fish sandwich.
☀ I went to the extreme end of the line.
☀ I never make predictions, especially about the future.
☀ Thanks to their joint collaboration the archaeologists found the handwritten manuscript in the destroyed ruins of the monastery.
☀ Say it again once more.
☀ Forward planning.
☀ She herself wrote her autobiography of her own life in just two weeks.
☀ The vote was completely and totally unanimous.
☀ Bits and pieces.
☀ First and foremost, lets begin.
☀ I made it with my own hands for you.
☀ A wishful start, one might say, but it was certainly a time of surreal dreams.
☀ The group wanted to climb up to the very summit at the top of the mountain.
☀ The plumber fixed our hot water heater.
☀ All crows are either black, or they are not black.
☀ Seafaring mariner.
☀ The wall was marred by a small, tiny speck of paint.

☀ Sign up & win free gifts!
☀ We are distributing free gifts!
☀ The dress cost only $100 dollars.
☀ Chai Tea Latte at Starbucks (*Chai is a hindi word for tea)
☀ Please prepay in advance
☀ This product will transform you into a good-looking beautiful woman
☀ The World’s Greatest Spokesman in the World!
☀ Today’s modern technology.
☀ McDonald’s new Zesty Mango McMini is really zesty.
☀ It is a new innovation.
☀ Added Bonus!

Movies, Songs and Others

☀ Allow myself to introduce… myself – Austin Powers: International Man of Mystery
☀ I shall slip unnoticed through the darkness… like a dark, unnoticeable slippy thing – MirrorMask
☀ Legend tells of a legendary warrior whose kung-fu skills were the stuff of legend – Kung Fu Panda
☀ So any help you could give us would be most… helpful – Monty Python and the Holy Grail
☀ And remember my friends, future events such as these will affect you in the future – Plan 9 from Outer Space
☀ It vexes me. I’m terribly vexed – Gladiator
☀ There’s nothing you can do that can’t be done. There’s nothing you can sing that can’t be sung – The Beatles
☀ Que sera, sera. Whatever will be, will be – Doris Day
☀ I want to live while I am alive – Bon Jovi
☀ Only the lucky ones… get lucky – Loverboy
☀ Shout it out loud! – Kiss
☀ Only time will tell, if we stand the test of time – Van Halen (Why can’t this be love)
☀ With malice toward none, with charity for all.
☀ He should be killed to death.
☀ Frozen ice.
☀ Now, everybody repeat again after me.
☀ Either it will rain tomorrow, or it won’t.
☀ I upgraded the RAM memory of my computer.
☀ All well and good; to all intents and purposes; cool, calm, and collected.
☀ What is your PIN number (the acronym stands for Personal Identification Number)
☀ ATM machine (Automated Teller Machine)
☀ CD-ROM disc (CD – Compact Disc)
☀ HIV virus (Human Immunodeficiency Virus)

The above figures of speech instances were some of the best tautology examples, which gives English language its flair.